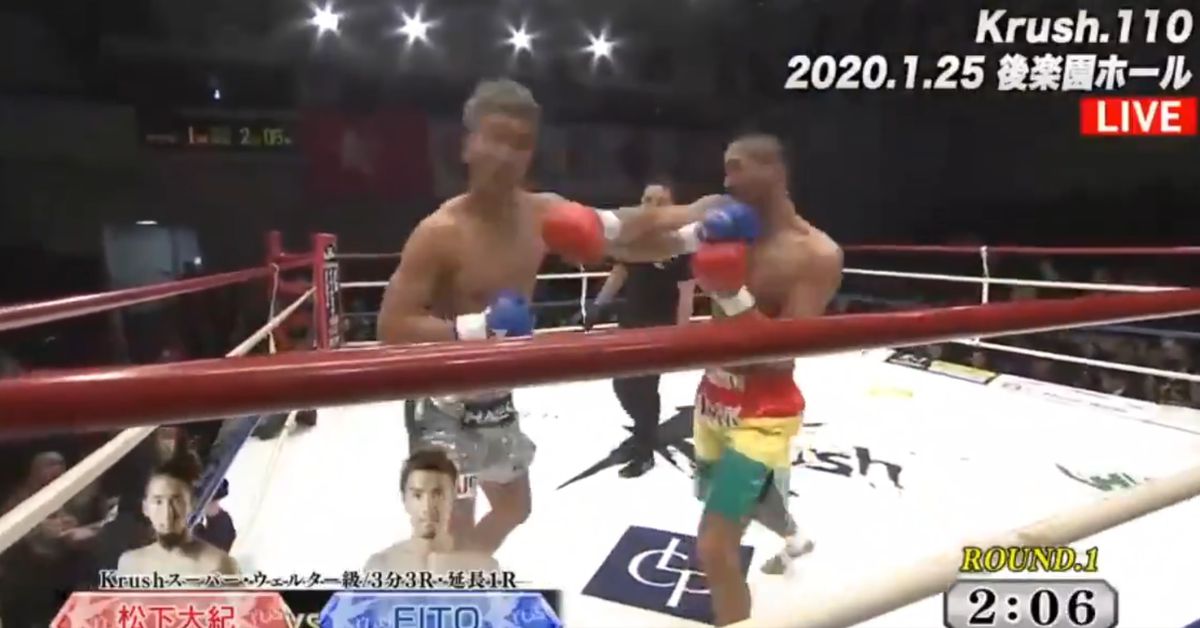 Welcome to the latest edition of Missed Fists, where we shine a light on fights from across the globe that may have been overlooked in these hectic times where it seems like there’s an MMA show every other day.

Do you hear that rumbling? That’s the sound of eight straight weeks of UFC events comin’ at cha! There are plenty of great Octagon encounters incoming, but they’ll be hard-pressed to top the action we saw this past weekend.

AL: We haven’t even hit February, and already we have the year’s best brawl, a delightful 90-second scrap between Daiku Matsushita and EITO from a K-1 KRUSH event in Tokyo on Saturday.

In the clip, EITO backs Matsushita into a corner and Matsushita goes full Jennifer Grey on his ass, just winging haymakers in retaliation. The best part? EITO is happy to play this game. Nothing but 1-2 combos right down the middle until one of them falls, which EITO happens to do first.

But EITO refuses to stay down, so Matsushita has to unleash one last flurry before the referee wisely waves this thing off. What an effort from both men.

JM: Man, that was just full on Rock ‘Em Sock ‘Em robots in human form there, and I am here for it. Legitimately, that is among the closest I’ve ever seen to the way RESE Robots fights, just without the head flying off at the end. Which is probably for the best, all things considered.

AL: Two other standout finishes captured by Twitter user @kick_mma2020 (give them a follow!) have to be mentioned: Hisaki Higashimoto’s spinning backfist KO of Shinichiro Kawasaki, and Rui finishing a badly wounded Takumi Nakahira off with a perfectly-timed knee to the face.

I mean, don’t get me wrong, the spinning backfist was obviously sensational. But that teep to the body and Mortal Kombat knee was awesome. That amount of skill and timing it requires to land that thing on a falling body is absurd.

AL: Never to be outdone, the latest Muay Hardcore event featured some absolutely awesome KOs, and the good news is that through the magic of YouTube you can watch the entire show for free.

Here’s Latxasak Souliyavong dusting Petchmai with an uppercut from hell right through the wickets. I might be mixing metaphors there, but it’s appropriate given how scrambled Petchmai was after this one.

JM: I stand corrected. THAT was a Mortal Kombat strike.

Also, can we take a minute to acknowledge how straightforward yet amazing “Muay Hardcore” is as a name? Because I, for one, find it wonderfully ridiculous.

AL: Next, I’m not sure this one qualifies as a Humpty Dumpty, but Reza Divsourati definitely had himself a memorable fall after eating this body kick from Yodwitthaya.

You can see Divsourati wanting to gut it out, and then suddenly realizing, “Nope, I’m out.”

JM: He tried, though! Boy did he try. Nothing but respect for Divsourati doing his level best to try and walk off after having an unplanned appendectomy in the middle of the ring. At some point, biology wins.

AL: As much as we loved those two finishes, this absolutely scorching counter-left by Mostafa Tabtoukhzadh might be the actual best KO of the bunch. Check out how much power he generates in a short amount of time and with such little space.

JM: That really is an impressive KO, made even more impressive by the fact that Phanrith looked to be taking command right there with a solid body shot of his own before getting leveled. That’s just picture-perfect placement from Tabtoukhzadh.

AL: Before we move on to the more civilized world of MMA, let’s check in with our bare-knuckle boxing cousins over at BKB 20 in London, England (available for replay on FITE TV PPV).

JM: OH SH*T. That’s the best KO of the week, no question. Tierney threw a friggin’ hammer, the force of which twisted Connelly’s entire body like a mop being wrung out. And it happened without gloves. Just brutal.

AL: Here’s a shout-out for veteran Matt Bessette, who was unable to find success in a couple of recent UFC appearances, but went right back to work in his return to CES. Last Friday, he picked up a thudding third-round knockout of Charles Cheeks III to regain the CES featherweight title.

JM: Featherweight Anthony Smith never got much traction in the UFC, but good to see him back where he belongs, dusting up guys in CES. Some people are just meant to be small-show heroes.

AL: That fine finish was overshadowed by bantamweight Ashiek Ajim. Earlier in the show, Ajim improved to 3-0 with a bap-bap-bap (technical term) walk-off KO of Andres Rodriguez.

JM: And some people are meant for bigger and better things. At 3-0, and with some serious power for 135, Ajim looks like he might be one of those guys.

AL: This last clip features William Knight taking out Rocky “The Number” Edwards, not to be confused with Leon “Rocky” Edwards. That should be easy to remember because “The Number” is a terrible nickname.

Even though this finish is nothing special, Knight remains one to watch. He’s 2-1 since earning a Contender Series developmental contract last year, and promotions like CES are the perfect place for guys like him to get their reps.

JM: I dunno, “The Number” seems like kind of a good nickname for a 12-10 journeyman, as he’s usually “just another number” on the Tapology page of more well-known fighters.

AL: I mean, those are numbers by the strictest definition of the term, yes.

JM: Was that too harsh? Probably. But it’s still a damn sight nicer than what Knight did to him. Ouch.

CES 60 is available for replay on UFC Fight Pass.

AL: Down in Sao Paulo, Brazil, at SFT 20 (full event available on YouTube) there were a handful of notable happenings, including Irwing “King Kong” Machado defeating Rene Soldado to win the vacant SFT welterweight title in a fun scrap that ended in the fifth.

What makes this effort particularly worthy of discussion is the fact that according to MMA manager Tiago Okamura (unclear if he’s Machado’s manager), “King Kong” took this fight on two-days’ notice and has fought as low as 135 pounds. He pushes the pace, and despite being the smaller fighter, he actually controls a lot of the grappling against the fence.

Tip of the cap to you, little “King Kong.”

JM: It feels like he should be named “Donkey Kong” instead of King Kong, considering his ground and pound to finish things off here. Or perhaps “Diddy Kong,” since he somehow fought at 135? That seems insane, but I guess I’m willing to believe it.

AL: We feature so many knockouts, it’s only fair we show some love to a solid submission, courtesy of 20-year-old Reginaldo Junior.

Here, we see Junior sending Julio Cesar to the Shadow Realm with a triangle choke. When’s the last time you saw someone do that?

JM: I’m always a sucker for someone getting slept with a choke, especially triangles. It feels like no one ever goes out in those, but the rare times they do, it’s always funny because then they fall backwards.

And props to Junior. He had to hang on and work to get that cinched in. But when he did, it was all she wrote.

AL: For one more curiosity, UFC lightweight contender Charles Oliveira participated in a one-round grappling exhibition bout against Lucas Barros that he won by decision. You can catch that around the 3:10:30 mark of the show.

Julia Budd vs. Cris Cyborg was the big fight of the weekend, but I hope fans stuck around for the postliminary bout between Ricardo Seixas and Dominic Clark.

An awesome finish, we can all agree, but was that a front kick, or a teep to the face?

JM: Tomato, tomato. That doesn’t work as well via text form as it does in person, but you get the point. Either way you slice it, Dominick Clark just caught a face full of foot and an “L” as a result, and that is something we always support here.

AL: The only thing that would have made it better is if Seixas celebrated like this: