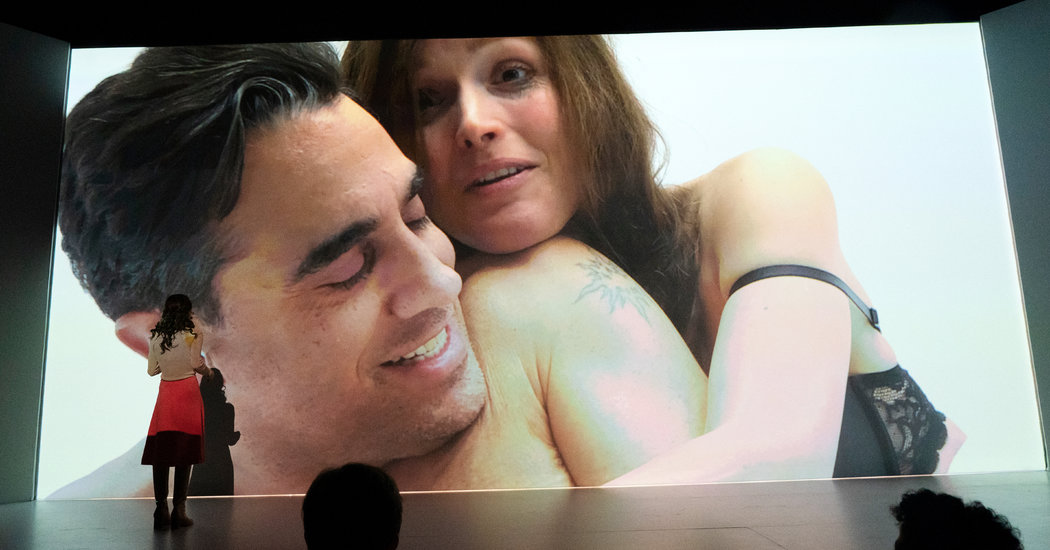 Though their deaths made their mother eternally infamous, little is known about the children Medea murdered. So give some credit to the writer and director Simon Stone’s otherwise unilluminating “Medea” for making us think — with personal concern as well as generic terror — about what it must have felt like to be the progeny of its rage-filled title character.

Euripides didn’t even give the boys names — never mind words to speak — in his archetypal play, one of the most harrowing examples of the ever-harrowing form of Greek tragedy. But in Stone’s latter-day variation, which opened at the Harvey Theater of the Brooklyn Academy of Music on Thursday, these ill-fated lads have not only names (Edgar and Gus) but also credibly detailed identities.

Their disastrously mismatched parents? They’re called Anna (the Medea role) and Lucas (a 21st-century Jason). That they’re portrayed by a high-profile, talented real-life couple, Rose Byrne and Bobby Cannavale, has helped make this “Medea” a hot winter ticket in New York. But while Byrne and Cannavale work hard in their unconvincingly written parts, do you mind if I linger on the boys for a minute more?

Edgar (Jolly Swag at the performance I saw) is the older one, angrier and more likely to act out when things get tense at home. He’s also making a documentary about his family life as a school project, poor little sap. Gus (Orson Hong) loves the movie “The Sixth Sense,” and charmingly quotes the line “I see dead people.” (Gabriel Amoroso and Emeka Guindo play the brothers on alternate nights.)

Gus also can’t stand it when people tell him a show’s ending in advance. “He hates spoilers,” explains Edgar, as his brother claps his hands over his ears and loudly chants.

You’re welcome to do the reader’s equivalent, of course, and toss this review aside now. But it’s hard to spoil the conclusion of “Medea” for anyone with a passing knowledge of Greek mythology.

These likable boys are doomed, doomed, doomed. Yet such is the innate intensity of Euripides’s original that whenever I revisit it, I nearly always find my stomach knotted in suspense as the play draws to its gory climax, just as I tense up every time Janet Leigh steps near the shower in “Psycho.”

Well, until now. Despite thrumming headache music and sound effects (by Stefan Gregory) — and despite my fondness for young Edgar and Gus — my pulse rate remained monotonously steady during this “Medea.” Such non-responsiveness is particularly disappointing given that the last revamp of a classic I saw from the Australian-born Stone left me breathless with exhilaration and exhaustion.

That was the Young Vic production of “Yerma,” seen in New York at the Park Avenue Armory in 2018, based on Federico García Lorca’s poetic play about a Spanish peasant woman undone by her inability to conceive a child. As with “Medea,” you knew there was nothing like a happy ending on offer.

But with the British actress Billie Piper embodying Stone’s reinvention of Lorca’s heroine, watching “Yerma” was like looking at a nuclear bomb go off in slow motion. There was an atavistic pull to Piper’s performance that both commanded attention and defied easy analysis. And by making this self-destructive character a confessional newspaper columnist, Stone cannily explored the limits and lure of 21st-century voyeurism.

His “Medea,” staged (in Dutch) in an earlier version five years ago for the Toneelgroep Amsterdam company, offers nothing like the same kind of insight or emotional impact. Once again, Stone is trying to recontextualize the primal drives of classic tragedy in the familiar landscape of today.

So the knowledge of our tragic heroine is now informed by current medical science on the subject of mental illness. When we first meet Byrne’s Anna, she is fresh from a yearlong stay in an institution to which Lucas (a former colleague) committed her, and on a pharmaceutical cocktail to control her destructive impulses.

Since Anna, once a brilliant research scientist, had been steadily poisoning Lucas after discovering he was having an affair with their boss’s daughter, you can understand why he felt she might need professional help — and incarceration. What’s less obvious is why he thinks it’s a good idea to reunite her, unsupervised, with their children.

You don’t need the outsize video simulcast close-ups (by Julia Frey) of Byrne’s steely eyes to see that Anna’s mind is still dangerously unsettled. She drinks herself into a stupor, stops bathing, falls asleep on the living room floor when she’s supposed to be taking the kids to school and cuts her hand into a bloody pulp.

And whenever she’s with Lucas, she behaves with the coercive, won’t-take-no-for-an-answer seductiveness of one of those romantically obsessed stalkers who are a staple of Lifetime movies. She also brings to mind the Oxygen documentary series “Snapped,” devoted to murderous women who exact vengeance on the men who do them wrong.

That means that, yes, this Medea — who, we learn, had transformed her unimaginative, nebbishy spouse into a superstar scientist — is very much of our moment. But to inspire the requisite pity and terror, Anna needs to exude a passion that eludes and transcends medical and social diagnosis. Byrne’s tightly calibrated performances is more forensic than tragic.

A bespectacled Cannavale bravely gives us a Jason figure who is basically a spineless hunk. But his passivity means that when he finally registers the full extent of Medea’s payback, it’s hard to respond with the dazed, horrified wonder the moment demands. (Jason was a jerk, too, but he was also a figure of heroic stature.)

The cast also notably includes Madeline Weinstein as Lucas’s perky young lover, the estimable Dylan Baker as her dad (and Lucas’s boss) and Jordan Boatman as one seriously shortsighted social worker. At least two of these characters will be drenched in ersatz blood before the show ends, and all of them will be dirtied by black ashes.

That’s the stuff that, during the later scenes, falls steadily from above into a pile of cinders, overwhelming the pristine whiteness of Bob Cousin’s clinical blank set (lighted with merciless brightness by Sarah Johnston).

It’s an arresting visual metaphor for existences reduced to ashes by people who can’t help destroying themselves. That image would be a lot more effective, though, if you had felt the real, scorching heat of lives that burned too bright with annihilating passion.