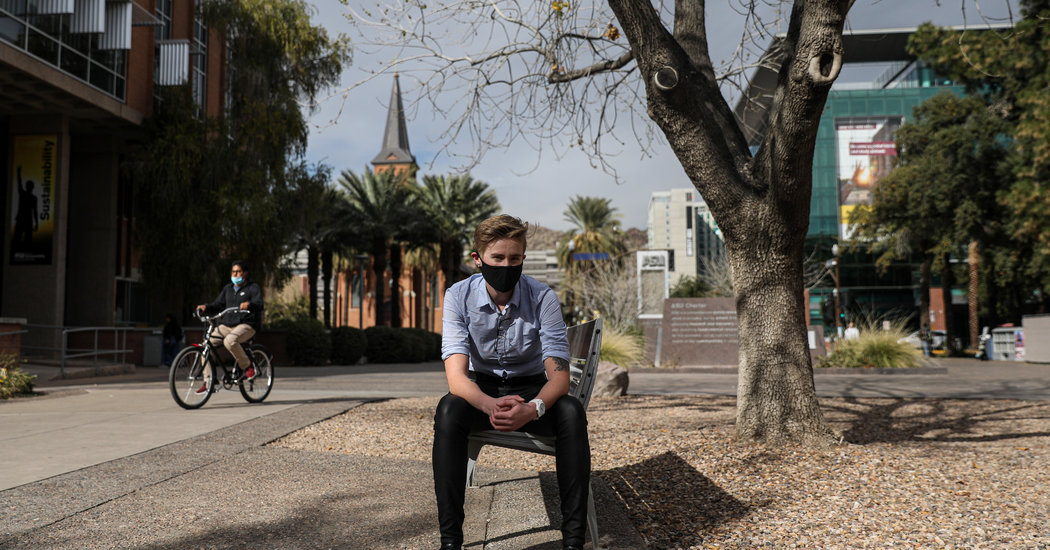 At the University of Wisconsin-Platteville, two undergraduates from Wuhan, China, were moved to a special dorm room and told to regularly take their temperatures. At Arizona State University, a student-led petition called for classes to be canceled after a confirmed case of coronavirus. Basketball games were postponed at Miami University in Ohio after two students who had recently returned from China displayed possible symptoms.

The global alarm over the coronavirus is particularly intense on American college campuses, where students from around the world are packed in tightly and illnesses sweep through dormitories and classrooms even in normal winters.

“This virus has sent off some panic bells for me,” said Sarah Linck, 22, a junior at Arizona State, in Tempe. She began shielding herself from the virus as soon as she heard that someone affiliated with her campus — perhaps a student, perhaps an instructor, perhaps someone else— was one of six people confirmed to have the virus in the United States.

At A.S.U., which has one of the largest student bodies in the country, students have been streaming into the campus health center in larger-than-usual numbers. A cough in the back of a classroom now brings nervous glances. Students who had planned to study abroad this semester are furiously rejiggering schedules.

Ms. Linck said she had a weak immune system and had gotten pneumonia more than once before, so she has been especially cautious. Just before stores near campus sold out of face masks, she had a friend who worked at a drugstore buy her one, which she now wears nonstop.

“I don’t know if I should be as worried about it as I am, but with this being the only thing on our minds, it’s difficult not to worry,” said Ms. Linck, who studies construction management.

At colleges across the country, administrators quickly made plans to protect the spread of the virus on their campuses and discourage travel to China. Boston University postponed its study abroad program in Shanghai that had been planned to begin in February.

Hundreds of students are being screened for the virus, either because they recently passed through Wuhan or because flulike symptoms sent them to a campus nurse. Possible cases at many schools — Baylor, Wesleyan and Tennessee Tech — have turned out to be false alarms after testing, but that has not stopped the anxiety.

Carolyn Kleve, 20, a junior at Arizona State who is 13 weeks pregnant, is afraid — for herself, but even more so for her unborn child and the 5-year-olds she works with every week as a student teacher.

Ms. Kleve has already skipped one day of classes, but said she cannot miss another without affecting her grades. Before she steps on campus each day, she puts on a mask and snaps on latex gloves. She also washes her hands furiously, but worries it is not enough.

“We’re trapped in a room of 20 to 30 people and I don’t know who has what illness,” Ms. Kleve said of her classes. “Have I already come into contact with it? Who knows.”

At the University of Wisconsin-Platteville, six students who were recently in Wuhan arrived this month for classes and were told to self-monitor their health in their dorm rooms. Two of the students, who were natives of Wuhan, have been rooming with each other instead of with American students, as was originally planned.

Melissa Gormley, dean of the college of liberal arts, said that the students had not showed any symptoms, and that she hoped to move the two from Wuhan into dorms with noninternational students soon.

In the meantime, they have been free to rove about campus and attended the semester’s first day of classes on Monday. The incubation period for the virus is about two weeks, meaning people can appear healthy for some time after they are exposed.

Dr. Gormley said she had met with all of the students who had traveled through Wuhan and tried to make them feel welcome.

“We would do whatever we have to do to take care of our people in our community here, whether they were from Wuhan, whether they had traveled to Wuhan, or whether they were another student,” Ms. Gormley said. “And I hope they know that. But I can imagine that being an exchange student in this context would be really scary.”

Students have described a rising anti-Chinese sentiment on their campuses that has extended to anyone of Asian descent. Some students have posted online about avoiding all Asian classmates or steering clear of Chinatowns.

Aaron Li, a senior at Cornell from China, said that he had created a form for Chinese students to anonymously submit concerns or questions about the virus and that one troubling response stuck out. It was from a student who said he had lied to his friends about spending winter break in California; he had actually returned home to China.

“He was worried about what his friends would think,” Mr. Li said, adding that some Chinese students had to simultaneously worry about the health of family members back home.

A campus satire publication dryly pushed back against the rising sentiment with an article under the headline, “Asian Student Asked If He Visited Wuhan Over Break.”

Charles Bui, 18, a freshman at the University of Houston, said he had scrolled past “dehumanizing” jokes online about the deadly virus and had personally seen people express relief after they stepped off an elevator with him.

“The environment doesn’t feel the same as it used to, and so it’s unsettling,” said Mr. Bui, who is Vietnamese-American and plans to major in business. He added that he had sometimes questioned his own reactions, asking, “Is this really about my race or am I overassuming?”

At the University of California, Berkeley, which has a large Chinese student population, officials apologized after the university health center posted an image that included “xenophobia” among a list of “common reactions” to the coronavirus. It was condemned as giving legitimacy to racism.

As the frenzy surrounding the virus grows, campus health officials are taking on two challenges: informing the public about the virus while managing exaggerated fears, and continuing to handle the flu viruses that typically spread this time of year.

Rachel Herman, the director of the Platteville school’s health center, said that members of her staff were in frequent contact with the local health department, but that they still consider influenza to be more concerning than the coronavirus.

Dr. Stacie San Miguel, the director of medical services at the University of California, San Diego’s student health center, said students and others had been flocking to physicians for checkups. The college has one of the largest international student populations — about 19 percent — in the United States, most of whom are Chinese.

“Especially the people who have been to China and had a runny nose, they’re not sure — is this something or not something? — so there has been some anxiety,” Dr. San Miguel said.

So far, the campus has not diagnosed anyone as having the virus, but at a conference on United States and China relations hosted by the college this week, officials introduced a novel standard for meet-and-greets that was aimed at calming nerves: no handshakes.