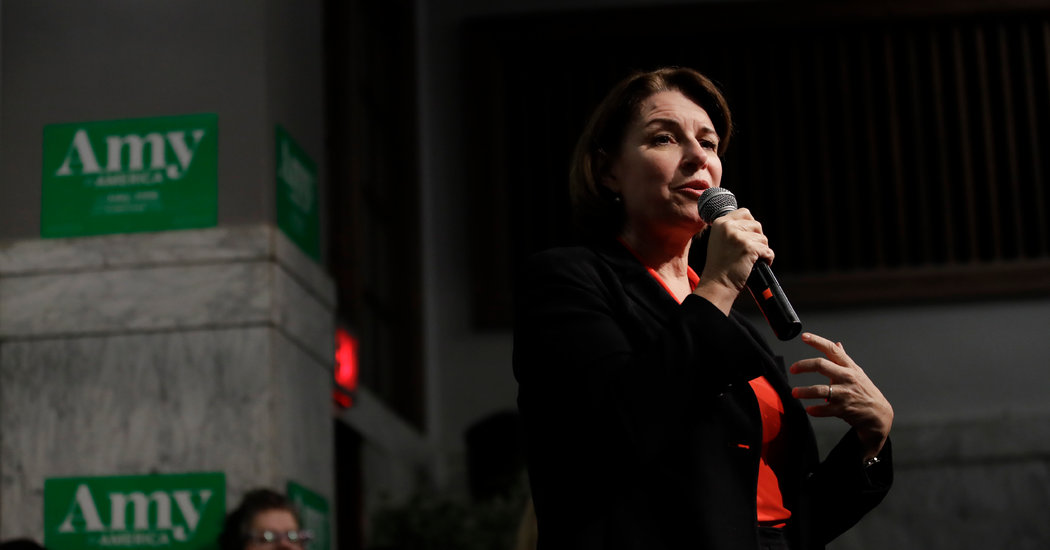 Civil rights activists and black community leaders in Minneapolis have called on Senator Amy Klobuchar of Minnesota to suspend her presidential campaign after a report raised questions about whether a black teenager was wrongly convicted of murder during her tenure as the Hennepin County attorney.

Ms. Klobuchar’s handling of the case involving the teenager, Myon Burrell, has come under renewed scrutiny after The Associated Press published an investigation this week detailing what it said were numerous flaws.

The senator has repeatedly highlighted Mr. Burrell’s conviction in the 2002 case, in which an 11-year-old girl was killed by a stray bullet, as evidence of her history of being tough on crime and seeking justice for African-American communities shaken by gun violence. But the A.P. article quoted one of Mr. Burrell’s co-defendants as saying that he was in fact the gunman responsible for the murder of the girl, Tyesha Edwards. Mr. Burrell, The A.P. reported, has insisted that he is innocent and has rejected all plea deals.

In a statement on Tuesday, representatives from the Minneapolis N.A.A.C.P., the Racial Justice Network, Black Lives Matter Twin Cities and other organizations jointly demanded that Ms. Klobuchar “immediately suspend her campaign for president, given her role in sending an innocent black teenager to prison for life.”

“Young people, young adults, were given life sentences to rot away in prison,” she added. “This benefits no one. However, it does benefit politicians that have used the criminal justice system to enhance their political careers, and enough is enough.”

“Amy Klobuchar,” Ms. Redmond said, “you have questions that need to be answered.”

The revelations, and the call for Ms. Klobuchar to suspend her campaign, came just days before the caucuses in Iowa — a state where she has invested considerable resources and needs to get strong results.

Throughout the Democratic primary, candidates like former Vice President Joseph R. Biden Jr. and former Mayor Michael R. Bloomberg of New York City have faced scrutiny of their records on criminal justice and policies they supported that disproportionately harmed African-American and Hispanic communities. And before she dropped out of the race, Senator Kamala Harris of California also faced questions about her time as a prosecutor.

On Friday, a spokeswoman for Ms. Klobuchar’s campaign said: “Senator Klobuchar has always believed in pursuing justice without fear or favor. That’s why she has said that any new evidence in this case should immediately be reviewed by the court.”

Ms. Klobuchar ran the Hennepin County attorney’s office from 1999 through 2006 and oversaw Mr. Burrell’s first trial, conviction and sentencing in 2003. That conviction was eventually reversed by the Minnesota Supreme Court, which found that a key statement made by Mr. Burrell should not have been used in the trial; Ms. Klobuchar was succeeded by Mike Freeman, the current Hennepin County attorney, who oversaw a second trial for Mr. Burrell, in which he was also convicted and sentenced to life in prison, officials said. Mr. Burrell was 16 at the time of the shooting and is now 33.

Though Ms. Klobuchar does not discuss her time as Hennepin County attorney as frequently as she cites her accomplishments as a federal lawmaker, she has often told the story of Tyesha Edwards at national televised debates, in interviews and when giving speeches on gun violence.

In its report, The A.P. said the case against Mr. Burrell was overly reliant on jailhouse informants — some of whom were offered sentence reductions, cash and other incentives for information — as well as unreliable accounts from the man who was the target of the gunfire. The A.P. report also laid out a number of leads that it said were not seriously pursued by the authorities and missteps in the interrogation. It noted that no gun was recovered and no fingerprints or D.N.A. evidence were made a part of the case.

The A.P. article also said that Ms. Klobuchar denied Mr. Burrell’s request to go to his mother’s funeral after she died in a car crash during the investigation.

A lawyer for Mr. Burrell could not immediately be reached for comment on Friday.

But Mr. Burrell told The A.P. he believed the authorities knew that he was innocent all along.

“They just didn’t feel like my life was worth living,” he said.