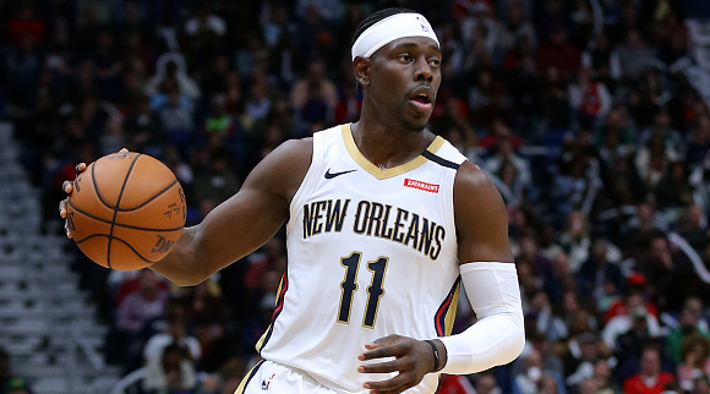 Trade season is upon us, and just like every year, there are several teams around the league looking to give their roster a jolt as we head into the second half of the season, while others are looking for that final piece to a potential championship puzzle.

Several teams out west are thought to be in the market for a roster upgrade, and there are a handful of players currently floundering on struggling teams who could certainly use a change of scenery, including Derrick Rose, Kevin Love, Andre Drummond, and Jrue Holiday, just to name a few.

Holiday, of course, is one of the more intriguing names, given his versatility as a backcourt option, and multiple reports have indicated that several teams are interested in his services. However, according to the latest rumblings, both Holiday and the Pelicans front office might want to take a wait-and-see approach, then re-evaluate at the end of the season.

Via Shams Charania of The Athletic:

Throughout this season, there has been speculation among teams about Holiday eventually wanting a trade out of New Orleans. However, league sources told The Athletic that Holiday has made clear he’s happy in New Orleans and committed to the city and team. According to sources with knowledge of his thinking, Holiday is said to want to take the rest of the season to view how this team performs, how the Pelicans can build upon winning 12 of their 18 games since Dec. 23 and how they can build down the road.

Holiday’s desire to remain in New Orleans — coupled with Pelicans executive Vice President David Griffin repeatedly vowing publicly that they do not intend to move their veterans unless there is a shift in player mindset — would seem to signal that Holiday will stay put. The Pelicans have wanted to view this roster construction for an entire season, and the belief, for now, is that Griffin stays with that plan.

Both Denver and Miami are said to have Holiday on their radar should things change, but the recent debut of Zion Williamson in New Orleans and his potential as a game-changer for the franchise could spur Holiday to take an even longer-term approach to his potential future with the team.

That won’t stop anyone from calling Griffin, though, and if the right package comes along, it could prove too tempting to pass up. For now, though, it appears Holiday’s desire is to stay put, and that coupled with New Orleans’ high asking price might keep the Pelicans quiet at the deadline.