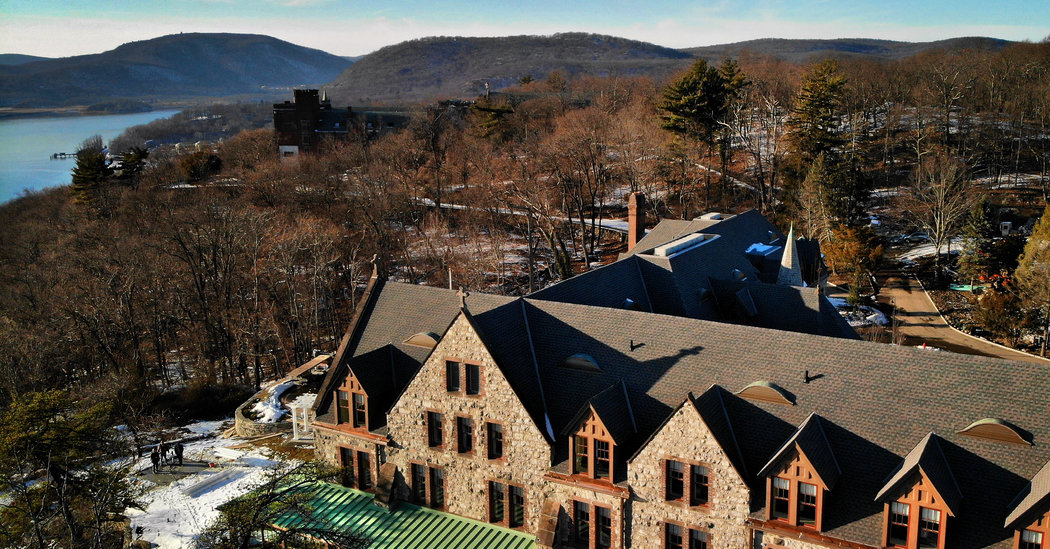 Anyone who has driven on Route 9 around Peekskill has probably seen what looks like a castle atop a cliff rising 300 feet above the Hudson River.

The mysterious area, known as Fort Hill, has a rich history.

From a small Native American tribe that had a deep connection to the land there, to George Washington’s army, which used the bluffs as a lookout during the Revolutionary War, to the country’s oldest Anglican order, which built a convent there, Fort Hill has always changed with the times.

Now it will be the site of a luxury hotel.

The Abbey Inn and Spa, scheduled to open in March, will be located in the old convent. It will have 42 rooms, many with panoramic views of the Hudson Valley. And in a boon for both local preservationists and business interests, who debated the fate of the Abbey and its historically significant environs for many years, the inn will open up dozens of acres of land to trails and heritage.

Martin Ginsburg, a founder and principal at Ginsburg Development Companies, which owns the Abbey as well as several new apartment buildings nearby, hopes the property will lure both New Yorkers and tourists alike.

“New York City gets 60 million visitors a year, and they say, ‘Where else can we go?’” he said. He pointed to cities like Paris and Lisbon, where tourists visit the capitol and then castle-hop through the rest of the region.

But it’s the history that makes the destination exceptional, said John Curran, a former historian for the city of Peekskill. “This community has too long been overlooked for its Revolutionary War contributions,” he said.

The Kitchawonk tribe, a subdivision of the Mohicans, was in Fort Hill first. They had a village on what is now the Peekskill waterfront. Dutch traders bought fur and skins from them in exchange for weapons, clothing and other items. Over time, however, the Dutch forced the tribe to leave the area.

During the Revolutionary War, Fort Hill was a strategic spot for the Continental Army. It was the gateway to the Hudson Highlands, a way to get supplies to several defensive river forts including Stony Point, Fort Clinton and Fort Montgomery. It was also an industrial center, where bread, gunpowder, leather — anything that fueled the war effort — was made.

For that reason, between 1776 and 1779, Fort Hill was sacked and raided by the British three times. The largest skirmish, and the one most people know about, occurred in March 1777. “Five Fort Hill barrack buildings burned,” Mr. Curran said. “We aren’t sure which side did that.”

In 1872, the Community of St. Mary, the first Anglican/Episcopalian religious Order in the United States, acquired the land, and over the next century, built an elaborate campus there.

Henry Martyn Congdon, the Brooklyn-born founder of the New York Ecclesiological Society and also an architect who was known for his gothic works across the country, designed the chapel and the convent building. The sculptor Joseph Sibbel donated a Roosevelt pipe organ to the chapel in 1894. In 1902 a 1,000-pound bell was installed.

When the order moved closer to Albany in 2003, the Ginsburg Development Company bought the property. The original plan, which was stymied by the recession, was to develop condos.

The company pivoted to the hotel idea, which has been difficult to execute. Construction workers have had to blast through stone. The opening date has been pushed back multiple times.

When the hotel does open, a reception area will have an exhibit with Revolutionary-era items like musket balls, buttons and belt buckles from soldier uniforms, cooking utensils, and more, which were excavated from Fort Hill.

The tiny chapel, a centerpiece of the inn, has hand-painted wall coverings and stained-glass windows. “My first look at this room several years ago shocked me that such artistic and architectural excellence existed here in Peekskill,” said Mr. Curran, whose book on the history of Fort Hill will be provided in each guest room.

“I usually have to tread carefully — Fourth of July in the Merkel household is always interesting — but the British actually won the battle at Fort Hill,” Mr. Merkel said. “If the Union Jack doesn’t make it to the abbey during the wedding, I will be surprised.”

Wedding guests and other visitors will be able to stroll the grounds of a refurbished park, itself a joint venture between the Ginsburg Development Corporation and the city.

A few years ago the corporation donated 52 acres of land around the hotel to Peekskill. It seemed like the thing to do to keep the peace in the city, which has a history of locals opposing the development of Fort Hill. In 1997, for example, a group named Friends of Historic Peekskill rallied to stop the development of 258 luxury apartments and 20 single-family dwellings.

“It was looked at as taking up too much land and getting rid of open space,” said Jean Friedman, the planning director for Peekskill, who added that there has been no opposition to the Abbey Inn project. “The fact that they are renovating an existing building helps,” she said.

As plans for the grounds evolve, local experts have stayed involved.

“There was always a mutual understanding that as the private property lands developed, the city would, in concert, develop and revive the park, said Jesica Youngblood, a city planner for Peekskill.

Chris Ingui, executive director of a nonprofit that builds trails (its volunteers made the stone staircase for Bear Mountain) helped assess and restore some of the paths, several of which were created by soldiers during the Revolutionary War. “You can tell because they have lots of heavy moss around the edges, and they are very integrated into the landscape,” he said.

Mr. Ginsburg hopes the Abbey won’t be the last building he restores. He is also interested in Bannerman’s Castle, an abandoned military surplus warehouse on an island in the middle of the Hudson River.

“We want people to come to the Abbey from New York City and then say, ‘Where else can we go?’”