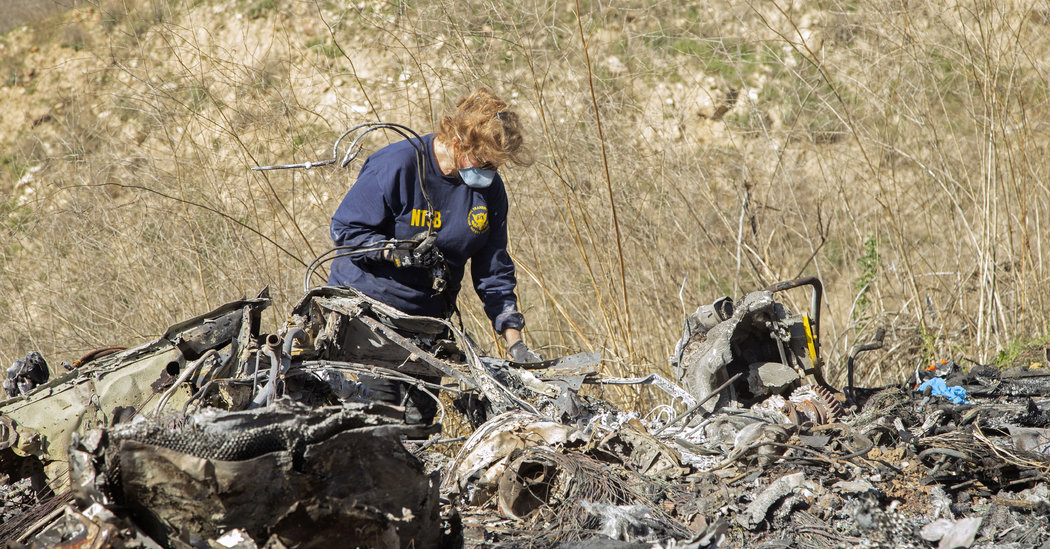 LOS ANGELES — When the helicopter carrying the basketball legend Kobe Bryant crashed into a fogbound mountainside on Sunday, killing all nine people onboard, the pilot who was struggling to avoid the clouds did not have the legal authority to navigate with his instruments because the aircraft owner did not have the necessary federal certification, according to three sources familiar with the charter helicopter company’s operations.

Island Express Helicopters, which owned the Sikorsky S-76B, had a Federal Aviation Administration operating certification that limited its pilots to flying under what are known as visual flight rules, or V.F.R., with at least three miles of visibility and a cloud ceiling no lower than 1,000 feet above the ground. The company did not have certification for its pilots to fly with instruments, said Kurt Deetz, a pilot and former safety manager at the company.

The helicopter had sophisticated instruments onboard that in other circumstances would allow for instrument flight, and the pilot, Ara Zobayan, was certified to fly by them. But because of the company’s certification limitations, he was required to fly only in conditions of sufficient visibility to navigate visually.

The limitations on Island Express’s operations are not unusual. Another operator at Van Nuys Airport, where the company is based, said none of the charter operators there have gone to the trouble and expense of winning certification for instrument flight, in part because it is normally so easy to navigate at low altitude in Southern California, with its easy-to-follow freeways and sunny weather.

But the new details about Island Express’s F.A.A. certification shed light on the question of why the pilot did not file an instrument flight plan that would have allowed him to climb well above the fog-shrouded hills and head to Camarillo Airport, not far from the basketball tournament where Mr. Bryant and his party were headed.

Island Express did not respond on Thursday to questions about the certification, which was earlier reported on by Forbes.

In his last message before the crash on Sunday, Mr. Zobayan, who was navigating through the hills near Calabasas, Calif., told air traffic control he was climbing to avoid a cloud layer. Witnesses on the ground reported seeing the helicopter flying through a layer of clouds and fog seconds before it crashed.

“There is only one way you can be in the clouds, on an I.F.R. flight plan or by accident,” said Mr. Deetz, referring to flight plans filed under what are known as instrument flight rules.

None of the local charter companies maintain certification that allows them to fly using instruments, said Claudia Lowry, who owns Group 3 Aviation, a charter service and flight school based at the same airport in Van Nuys as Island Express. I.F.R. certification would mean drastically increased training, equipment and insurance requirements. Even local police helicopters do not maintain it, she said.

“It’s not worth it, we don’t fly in that kind of weather anyway,” Ms. Lowry said. “And most of the time the weather is good.”

Another source familiar with the matter confirmed that Island Express did not have the F.A.A. certification that would have been needed to fly under instrument conditions.

National Transportation Safety Board officials said they were reviewing the company’s certifications and would not comment on their contents until the review was complete.

N.T.S.B. investigators said they were continuing to look at a range of possible factors in the crash, including the possibility of a mechanical failure. “We take a broad look at everything in an investigation — man, machine and the environment,” Jennifer Homendy, an N.T.S.B. board member, said on Monday. “And weather is just a small portion of that.”

The helicopter left John Wayne Airport in Orange County at just after 9 a.m. Sunday on an overcast day. There, further south from the crash site, the visibility was four miles, well within visual flight conditions. But as they headed north, they encountered a lowering cloud deck and visibility down to two and a half miles. When he reached Burbank, still well short of his destination, the pilot asked for a special visual flight rules clearance that would allow him to fly at visibility less than the three miles normally required for visual flight, so long as the aircraft remained clear of clouds, through the controlled airspace around Burbank and Van Nuys.

Once he cleared Van Nuys and turned south and west toward Calabasas, the pilot reported that visibility was sufficient to meet the legal requirements for visual flight — but as he went on, the weather appears to have worsened.

Mr. Deetz worked with Mr. Zobayan for years at Island Express, before leaving in 2017, and also regularly flew Mr. Bryant during his time there.

He said flying in the conditions Mr. Zobayan encountered Sunday demanded that he proceed slowly and with caution.

“It was not perfect but it’s not enough to say no to a flight,” he said.

Reports from people on the ground suggest that conditions may have deteriorated further when the helicopter crossed the mountains on the western edge of the San Fernando Valley. The clouds sat about 300 feet off the ground, witnesses near the crash scene said.

The Sikorski S-76B is a large and powerful helicopter often used as a luxury ride for VIPs. It is also used extensively for shuttling crews on offshore oil rigs and carrying emergency medical crews. It has a good safety record, in part because it has two engines that allow it to keep flying even if one fails, and a backup hydraulic system. It also has controls for an optional second pilot.

The aircraft is equipped for instrument flying for operators licensed to do so — even with a solo pilot.

Island Express and nearly all other companies in the region fly the S-76B almost exclusively with a single pilot, according to operators there. Mr. Deetz said it was rarely necessary to have a second pilot; in fact, he said, two pilots sometimes get in each others’ way. Only a few safety-conscious clients have in the past asked for two pilots, Mr. Deetz said, and Mr. Bryant never did.

Other operators have cited the lower cost of flying with a single pilot.

But flying with one pilot is risky, said Doug Solbrekken, who flew the same Sikorsky for decades in mountainous British Columbia, Canada, and instructed pilots in terrain avoidance.

“This is a big, fast aircraft, almost like a jet,” he said in an interview. “If you get into poor conditions, the workload for one pilot can be too high.”

Under good conditions, he said, flying with one pilot is straightforward. But if a flight becomes complex because of shifting cloud layers and patchy communication with air traffic control, he said, as may have been the case on the flight carrying Mr. Bryant and the others, small mistakes can compound into catastrophe.

“With another pilot there, you have help. That’s what this helicopter was designed for,” he said. “I can’t tell you how many times I’ve flown as the second pilot and had to help correct something.”

The manufacturer said in a statement that the S-76 models can be flown by either one or two pilots, and operators choose “based on regulatory and other requirements specific to their operation.”

Another factor is cost, some pilots said. “The customers don’t want to pay more, so they just go with one,” said David Zara, a commercial jet pilot who has flown regularly as a passenger in Sikorsky S-76s. “Legally, it can be flown with one pilot. Technically, it’s a very bad idea.”