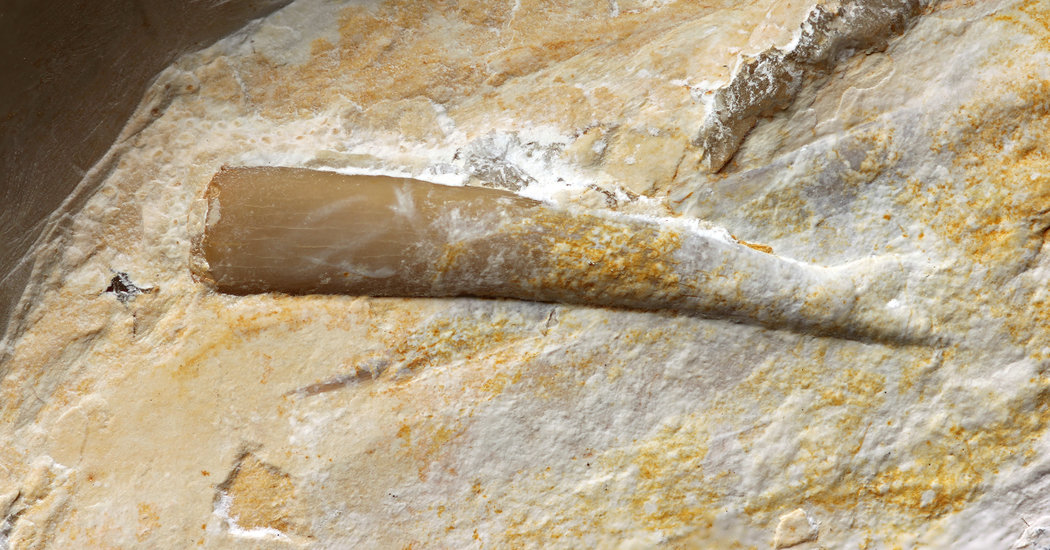 About 150 million years ago, a pterosaur experienced an embarrassing mealtime mishap. Attempting to catch and eat a seafood snack, the flying reptile came away one tooth short.

At least, that is the chain of events suggested by a fossil described earlier this week in Scientific Reports: a preserved cephalopod with a pterosaur tooth embedded inside of it.

This “fossilized action snapshot” is the first evidence scientists have that these winged contemporaries of dinosaurs ate prehistoric squid, or at least tried, said Jean-Paul Billon Bruyat, an expert in prehistoric reptiles who was not involved in the research.

The fossil also joins a small group of records that hint at the ecological relationships between ancient creatures.

The specimen, which was found in Germany’s Solnhofen fossil beds, is an 11-inch-long coleoid cephalopod, a precursor to today’s squids, octopuses and cuttlefish. It is preserved well enough that its ink sac and fins are readily visible, as is the very sharp-looking tooth stuck just below its head.

René Hoffmann, an author of the paper and a postdoctoral researcher at Ruhr-Universität Bochum in Germany and an expert in prehistoric cephalopods, came across a photo of the fossil last year and was immediately intrigued.

“Two fossils together could give us an idea of predator-prey relationships,” he said.

Based on the tooth’s shape, size and texture, along with the fossil’s location and age, the tooth probably belonged to Rhamphorhynchus muensteri. The species had a five-foot wingspan, said Jordan Bestwick, a paleobiologist at the University of Leicester in England who specializes in pterosaur diets and was an author of the paper.

Rhamphorhynchus hunted fish, likely by flying over the water and snapping them up. But this is the first direct evidence that these pterosaurs also had a taste for cephalopods, said Dr. Bestwick.

It is also the only record of “a failed predation attempt” made by any pterosaur. (Sorry, bud.)

The researchers also used ultraviolet light — which can differentiate between sediment and formerly living tissue — to determine if the tooth was stuck inside the cephalopod when both were fossilized, not merely lying on top. Overlap between the mantle tissue and the tip of the tooth showed that the tooth was embedded least half an inch deep.

Once that was settled, the researchers imagined the scenario.

Reconstructing ancient encounters is always “highly speculative,” said Dr. Hoffmann. But he pictured the pterosaur flying over the water when its shadow scared a group of cephalopods, which began jumping out of the water.

“Then the pterosaur grabbed one, but not perfectly,” said Dr. Hoffmann. The cephalopod thrashed around. It managed to get away — and took the reptile’s tooth with it.

For the sea creature, a daring escape. For the pterosaur, a calamari calamity.

But one that led to some scientific insight, at least. “It is very difficult to demonstrate a fossilized predator-prey relationship,” said Dr. Billon-Bruyat. Paleontologists sometimes find preserved prey within a predator’s stomach or throat, or inside fossilized feces, called coprolites.

Occasionally, more creative interspecies encounters are preserved. Last year, Dr. Billon-Bruyat was part of a team that studied the shell of an ancient sea turtle that had apparently been stepped on by a sauropod.

And the tables may have been turned on some pterosaurs. They have been found often enough next to a fossilized large prehistoric fish called Aspidorhynchus that some researchers think the flying reptiles were frequently seized by the fish.

Although Dr. Billon-Bruyat is convinced by the new paper’s interpretation of the cephalopod fossil, other experts are less certain.

Because the tooth is embedded in soft tissue rather than bone, it is possible the two became entangled in some other way, said Jingmai O’Connor, a senior professor at the Institute of Vertebrate Paleontology and Paleoanthropology in Beijing: “Perhaps the squid fell to the bottom of the sea when it died and landed on a pterosaur tooth.”

Dr. O’Connor also wondered why pterosaurs would have eaten cephalopods if doing so was so risky, although she granted that everyone has bad luck.

“I’ve broken a tooth eating a samosa,” she said. “So nearly anything is possible.”