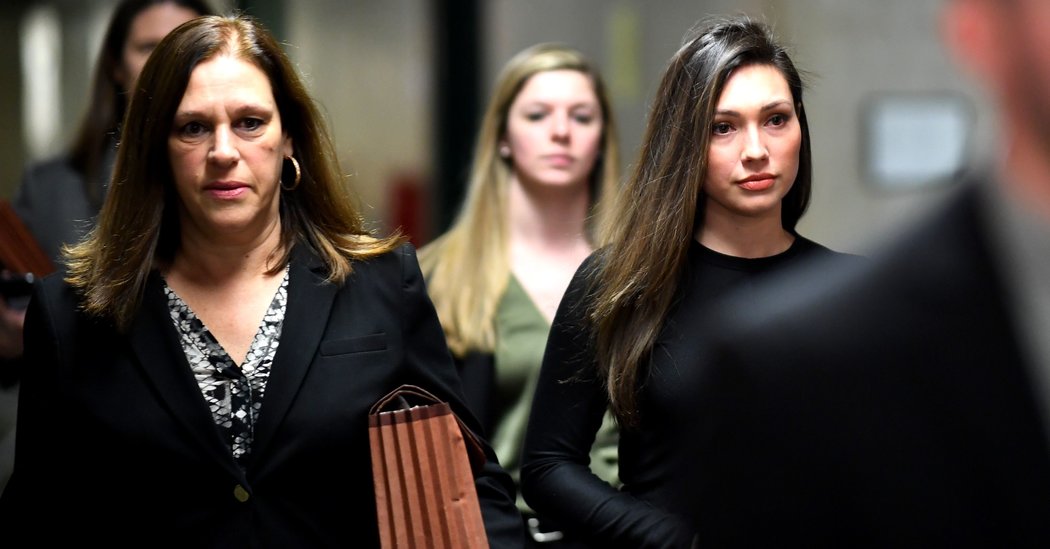 A former actress who has accused Harvey Weinstein of raping her in a Manhattan hotel room seven years ago is expected to take the witness stand at his trial on Friday morning, providing a sworn account of one of the most serious allegations against the once-powerful producer.

The witness, Jessica Mann, had moved to Los Angeles from a dairy farm in Washington State to pursue acting when, prosecutors say, she met the famous Hollywood producer Harvey Weinstein at a party in 2013. Mr. Weinstein quickly took an interest in Ms. Mann, meeting with her several times to discuss her career.

Prosecutors say Mr. Weinstein manipulated Ms. Mann from the start, dangling the possibility of work and asking her for a massage at their first meeting, then forcing oral sex on her during a second meeting that she thought was to discuss a movie role.

Weeks later, prosecutors said, he forcibly raped her at the DoubleTree hotel in Midtown Manhattan after injecting his penis with erection medication. Later that year, prosecutors said, Mr. Weinstein had intercourse with Ms. Mann after she informed him she had a boyfriend, telling her: “She owed him one more time.”

Mr. Weinstein’s lawyers have argued Ms. Mann had a consensual relationship with the producer that lasted for years after the alleged assault and benefited her professionally. They have pointed to dozens of friendly emails Ms. Mann sent to Mr. Weinstein expressing affection and love for him.

Ms. Mann will be the fifth accuser to take the witness stand against Mr. Weinstein in the State Supreme Court in Manhattan. He is charged with first and third-degree rape, and predatory sexual assault in connection with his encounter with Ms. Mann in 2013.

A total of six women have agreed to testify that Mr. Weinstein assaulted them. The trial was one of the most highly anticipated proceedings in recent memory, seen by many as an important moment in the #MeToo movement, which was set in motion in October 2017, when, after years of whispers, several women went public with their allegations that Mr. Weinstein had sexually harassed or assaulted them.

Since then, scores of women have come forward to lodge complaints about the producer, who was once one of the most powerful figures in Hollywood, having reshaped the independent movie industry with Oscar-winning films like “Shakespeare in Love.”

In all, prosecutors have charged Mr. Weinstein with five felony counts, including two counts of predatory sexual assault, which requires prosecutors to show he committed a serious sexual crime against at least two people and carries a maximum penalty of life in prison.

He has pleaded not guilty to the charges.

So far, four women have testified that Mr. Weinstein, 67, sexually assaulted them.

Annabella Sciorra, the actress known for her work in “Jungle Fever” and “The Sopranos,” testified last week that he raped her in her apartment in 1993 or 1994, after pushing his way in. Her account is meant to support a charge of predatory sexual assault.

Three women testified this week, including Miriam Haley, a former production assistant, who said that Mr. Weinstein forced her onto a bed in his apartment in 2006 and held her down while he performed oral sex. The heart of the criminal indictment hinges on the allegations made by Ms. Haley and Ms. Mann.

Justice James A. Burke permitted prosecutors to call three other women who claim Mr. Weinstein assaulted them under a rule that allows people to testify about “prior bad acts” to establish a pattern of behavior. A similar strategy was employed in the second Bill Cosby trial, which ended in a conviction.

Those women include two former actresses, Tarale Wulff and Dawn Dunning, who testified how they met Mr. Weinstein while waiting tables in the mid-2000s and were lured into meetings with him, ostensibly to talk about movie scripts and possible parts, only to be sexually assaulted when they were alone with him. A third woman, Lauren Young, is expected to testify next week.

Mr. Weinstein’s lawyers have tried to chip away at his accusers credibility on cross-examination. They argue the women all consented to have sex with Mr. Weinstein to advance their careers, and have pointed out the two main accusers — Ms. Haley and Ms. Mann — both appear, from email exchanges, to have had a friendly relationship with Mr. Weinstein after the alleged assaults.

Prosecutors have acknowledged Ms. Mann maintained a relationship with Mr. Weinstein for years after the alleged rape to save her career.

In legal terms, rape can — and often does — occur within consensual relationships, such as an abusive marriage. Some victims choose — or are forced by circumstances — to maintain outwardly friendly relationships with their attackers.

On March 18, 2013, prosecutors said Ms. Mann had set up a breakfast meeting with Mr. Weinstein and two of her friends in the industry. The producer showed up early and checked into the hotel.

Prosecutors said Ms. Mann began grilling Mr. Weinstein about why he had a room in the hotel, since he had an apartment in Manhattan. He warned her not to embarrass him. They continued the conversation in a hotel room where Mr. Weinstein demanded she take off her clothes, prosecutors said. She protested.

“He became louder, more aggressive,” Meghan Hast, a prosecutor said in opening remarks. Ms. Mann got onto the bed. Then, Mr. Weinstein disappeared into the bathroom for a moment, prosecutors said, and returned with an erection and raped her.

Mr. Weinstein’s lawyers are expected to try to undermine Ms. Mann’s account by pointing to a trove of emails that suggest the encounters were consensual.

“The evidence will show the complaining witnesses sent dozens and dozens of loving emails to Harvey Weinstein,” Damon Cheronis, one of Mr. Weinstein’s lawyers said at a previous hearing.

Ms. Mann sent Mr. Weinstein an email one month after the alleged rape saying, “I hope to see you sooner rather than later.”

The next day she wrote, “I appreciate all you do for me, it shows.” Five days later, she wrote, “It would be great to see you later and catch up.”

Mr. Weinstein’s lawyers said she had also reached out suggesting the producer meet her mother and had given him her new number.

Then eight months before Mr. Weinstein’s treatment of women was revealed in a series of exposes, Ms. Mann wrote to him on Feb. 8, 2017: “I love you, always do. But hate feeling like a booty call.”