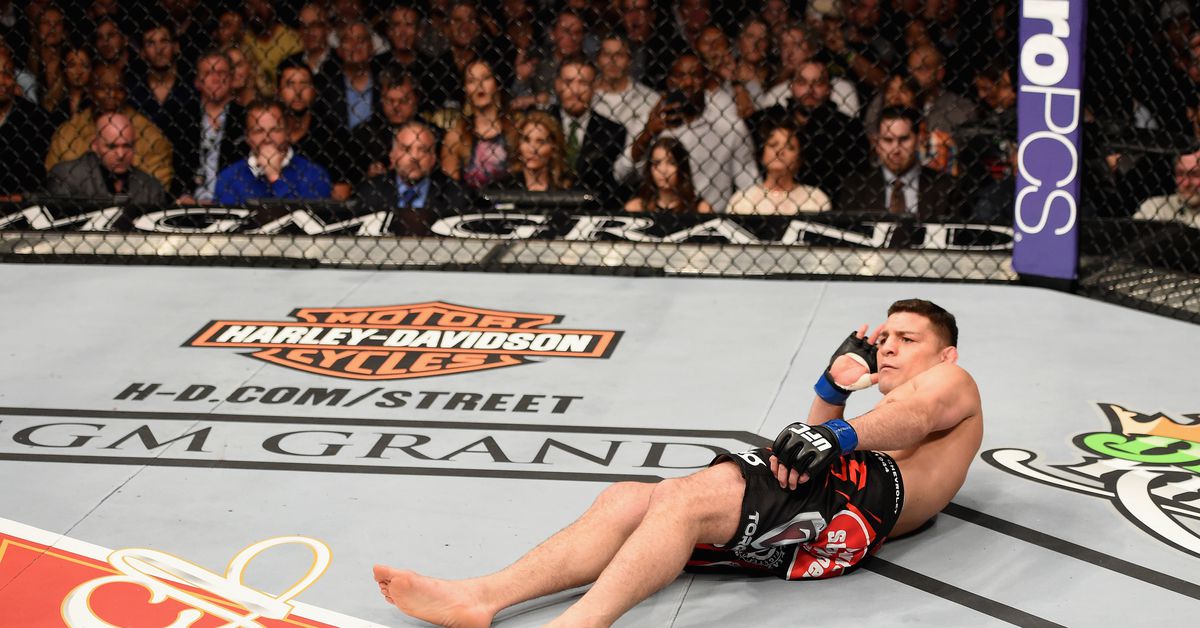 How many truly iconic moments are there in MMA history? How many single frames encapsulate all a fighter is, capture the essence of a bout and bring a vigorous nod of recognition for all it represents, all in an eye blink?

There’s Dan Henderson dive-bombing Michael Bisping, suspended mid-air with his right hand cocked and ready to deliver the payload. There’s Anderson Silva landing a front face kick knockout on Vitor Belfort in Brazil’s “Fight of the Decade.” There’s Robbie Lawler and Rory MacDonald, faces dripping blood and eyes locked, refusing to give an inch after the end of a round of one of the most ferocious fights of all time. There are a few others, but name one, and like these others, it is almost certainly going to capture some kind of in-fight action.

And then there’s the lay down.

On the night of Jan. 31, 2015, Diaz met Anderson Silva in the main event of UFC 183. The match was a big deal. Prior to it, the last time the promotion had intentionally designed a pay-per-view event without a championship headliner was almost four years prior at UFC 127. But even that was a far different scenario; it was an experiment in a new market, Australia.

This was Las Vegas, the UFC’s home base and the fight capital of the world. This marked Anderson Silva’s return following a gruesome broken leg. This was Diaz, the UFC’s resident counterculture star, returning after a nearly two-year hiatus. This was Super Bowl weekend. It was a capital-E Event.

The sport had missed both stars. The idea of putting them together in a cage had long been discussed. But for most of that time, it had seemed a fantasy. For years, Silva stood atop the UFC middleweight division as the champion, while Diaz fought as a welterweight, putting a match between them out of reach. Despite Diaz putting the possibility into the universe almost a half-decade earlier, there seemed to be no path toward each other. Until suddenly, with both on the comeback trail, there was. Suddenly, two beloved and missed stars landing at the same time in the same place, made perfect sense.

We didn’t know it then, but UFC 183 proved to be Diaz’s last fight week. He missed a flight or two en route, skipped the media day, dodged his open workout. It was vintage. By this point, nearly everyone had embraced his nonconformist approach. Even UFC president Dana White, who once removed Diaz from a title fight for similar behavior, played along, posting a “Have you seen me?” Diaz milk carton on his social media accounts.

We’d reached the point where nobody much cared about that stuff as long as he showed up on fight night, and that he always did.

This was a man who beat Chris Lytle in his second professional fight, at a time when Lytle was 20 fights into his career. Who knocked out Robbie Lawler! Who gogoplata’d Takanori Gomi, pot test be damned. Who out trash-talked Frank Shamrock en route to stopping him with a flurry of punches. Who out-sniped Paul Daley! Who so exasperated Georges St-Pierre in the leadup to their fight that GSP could only muster the MMA-famous phrase “Are you crazy in your head, man?”

Diaz was a treasure, an unpredictable sort who would utter whatever came to mind with little if any filter.

He was already a legendary figure by the time he signed to face Silva, but few knew it might be the last time we saw him in a cage. At the time, he was just 31 years old and one fight removed from a title fight. There seemed to be so much still ahead.

It wasn’t meant to be. Diaz tested positive for marijuana metabolites after the fight, and the Nevada Athletic Commission passed down a ridiculously punitive five-year ban, later reduced to (an also ridiculously punitive) 18 months on appeal. But while he was out, Diaz clearly realized he no longer needed this.

Good for him. He gave us enough. So many great fights and quotes and moments, closing with the coup de grâce: the lay down!

If you watched the match, you may not remember all the specifics — that Diaz was talking trash to Silva within 15 seconds of the opening bell, that they didn’t spend a second on the ground, that Diaz, a notorious bleeder, wasn’t busted up until the last minute of the fight. But you remember the lay down.

As is customary for Silva, he spent the first moments of the fight passively circling and measuring in an attempt to set his distance control. Diaz wasn’t having it. Attempting to force Silva into a firefight, he fired off a few jabs and then a kick, and as Silva continually circled away, Diaz baited him in. Silva threw a brief combo, but then circled for the next 15 seconds. Frustrated by the lack of action, Diaz backed up two steps and laid down on his side, right hand cupped to his ear as if he was bored. The fight was just 59 seconds old.

The audacity, the brashness, the sheer bizarreness of it all made it a singular MMA moment, a taunt that lives on in infamy. In a sport that celebrates individuals, it was about as unique a moment as we’d ever seen from about as unique a character as we have ever seen. Laying down in a cage. During a fight. Against Anderson Silva!

How cheeky. How irreverent. How fun. Of course the crowd loved it. It was probably the loudest ovation earned during an excellent fight.

And then he was gone.

The MMA world still misses him.

Every so often, the comeback chatter starts anew that he will return. He could; he is still just 36 years old. But if you’re of the opinion that he’s given us enough, you have plenty of memories to draw on, ending with a night where a single image reminds us that Nick Diaz could never truly be caged.