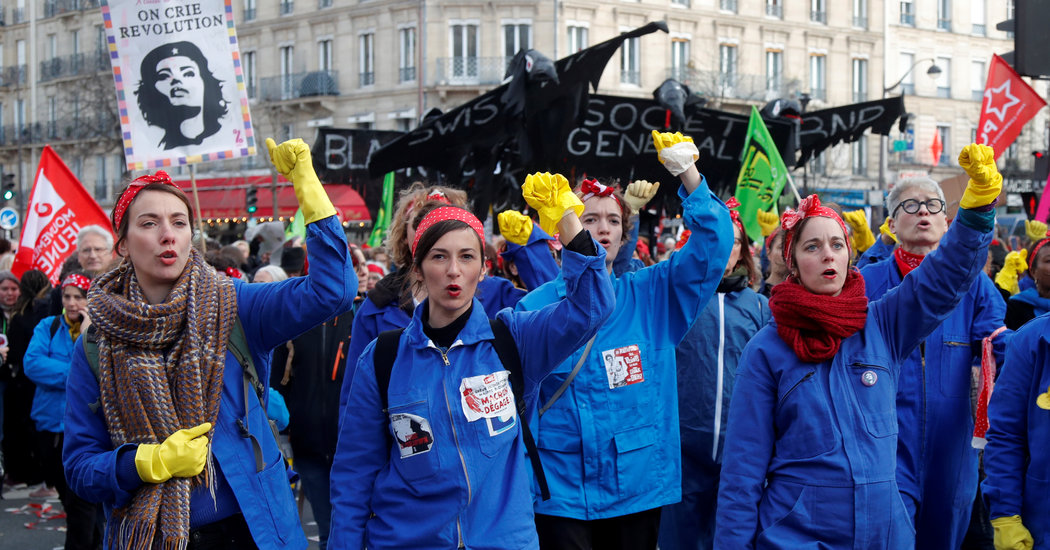 Friday was not a good day for Europe. As the European Union officially became smaller, losing Britain as a member, new data showed that economic growth in the bloc came almost to a standstill and that it is in danger of slipping into recession.

The 28 countries in the European Union grew only 0.1 percent during the last three months of 2019 compared with the previous quarter, according to official statistics. The eurozone, the region that includes 19 of those countries that use the euro, grew by the same amount in that period.

It was the European Union’s worst performance since the beginning of 2013, and leaves Europe with little margin for error as it braces for the economic impact of the coronavirus. Compounding the problem: The American economy has also slowed, with growth at its lowest rate since 2016. The United States is Europe’s largest trading partner.

A number of factors contributed to the unexpectedly bad growth figures, economists said. They include widespread strikes in France, political confusion in Italy and slumping world trade.

But Brexit hasn’t helped. With the future terms of cross-channel trade still to be negotiated, some businesses may be hesitant to hire new workers or spend money on expansion.

“It is one of the uncertainties weighing on investment,” said Rosie Colthorpe, European economist at Oxford Economics in London. “It’s still quite uncertain what both sides want.”

Growth at the end of the year was significantly slower than during previous quarters. The eurozone countries grew just 1.2 percent during 2019, according to a preliminary estimate by Eurostat, the European Union’s official statistics agency. The bloc as a whole, which includes countries that aren’t in the eurozone, like Sweden, Poland and Romania, grew 1.4 percent.

“The specter of recession is back,” Christoph Weil, an economist at Commerzbank in Frankfurt, said in a note to investors on Friday.

The coronavirus is another big unknown. China is a major customer for German cars and other European products. A slowdown in China would spill over to the eurozone. Europeans are also nervous that President Trump could follow through on threats to put punitive tariffs on cars manufactured there.

Output in Italy, Europe’s most troubled big economy, unexpectedly shrank 0.3 percent in the fourth quarter. For the full year, Italian growth was zero, signaling more of the stagnation that has plagued the country for more than a decade.

Brexit has already hurt trade between Britain and the rest of the Europe. Germany missed out on about 16.2 billion euros, or $18 billion, in exports to Britain because of Brexit, according to the Ifo Institute for Economic Research in Munich, which measured how much more Germany would have sold to Britain if trade had remained as high as it was in 2015, before the Brexit referendum.

Some economists expressed optimism that the fourth quarter of 2019 was a low point and that European growth will begin to recover. Only a few months ago, Britain appeared to be headed for a disorderly exit from the European Union. That danger, at least, seems to be past.

France, where the economy unexpectedly shrank 0.1 percent in the fourth quarter, could bounce back now that the strikes that paralyzed transportation have largely ended.

Unemployment in the eurozone, at 7.4 percent in December, is at its lowest since before the financial crisis began in 2008, according to figures released Thursday. When people have jobs, they spend more money and contribute to growth.

“Our hope is that the fourth quarter marks the bottom,” Ms. Colthorpe of Oxford Economics said. “We are little bit positive about 2020. But with uncertainties about Brexit and so forth it’s not going to be a massive rebound.”