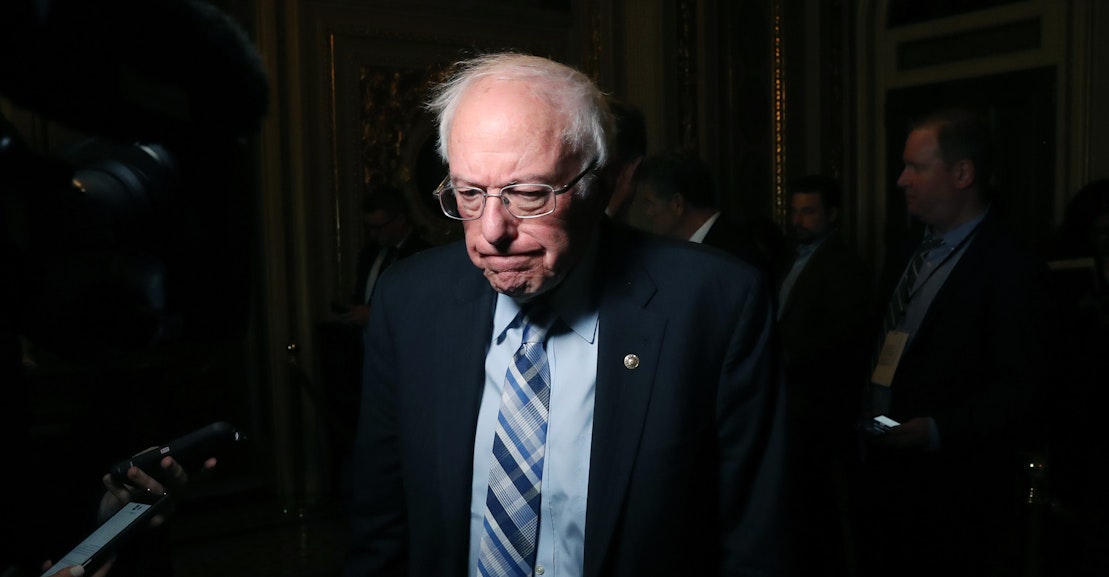 The first openly anti-Bernie Sanders attack ad of the Democratic primary campaign is now airing across Iowa, thanks to a $680,000 ad buy from the PAC arm of Democratic Majority for Israel, a group founded to counter what it sees as the Democratic Party’s growing skepticism about the Israeli government.

Coincidentally, on Wednesday, the same day the ad went live on Iowa television, President Donald Trump, alongside Israeli Prime Minister Benjamin Netanyahu, unveiled his “peace plan” for Israel and Palestine. The Palestinians quickly disavowed the proposal, but in keeping with the longstanding, bipartisan tradition that there be “no daylight” between the Israeli and American governments, many Democratic Party leaders refused to criticize it. House Speaker Nancy Pelosi even sounded cautiously optimistic about the plan, calling the squiggly patchwork map sketched out by the Trump administration for a future Palestinian state “a basis for negotiation.”

Most of the frontrunners for the Democratic nomination were, perhaps surprisingly, more skeptical. “Trump’s ‘peace plan’ is a rubber stamp for annexation and offers no chance for a real Palestinian state,” Senator Elizabeth Warren’s campaign said on Twitter. “Releasing a plan without negotiating with Palestinians isn’t diplomacy, it’s a sham. I will oppose unilateral annexation in any form—and reverse any policy that supports it.”

Even Joe Biden’s campaign hinted that he would reject the deal. “This is a political stunt that could spark unilateral moves to annex territory and set back peace even more,” it wrote on Twitter.

Biden is—and has been for almost his entire career—one of the Israeli government’s most stalwart defenders in the Democratic Party. But does his skepticism about the “peace plan” suggest that the party is undergoing a sea change in its relationship to Israel? If it were, Democratic Majority for Israel’s super PAC would surely be launching attack ads at a slew of candidates, not just Sanders, and yet the Vermont senator remains their only target. They must see him, and him alone, as a special threat.

This dynamic goes beyond America’s relationship with Israel. The Democratic foreign policy establishment has mobilized against only one presidential candidate in this primary, and it’s because he is the only one who would shut them out of his administration.

The New York Times’s Nick Confessore recently said, “There is no such thing as a Democratic establishment” (he later clarified, sort of, saying that there is one, but that it is “semi-disorganized” and largely ineffective). Then, as if he wanted to prove Confessore wrong, Tom Perez, the chairman of the Democratic National Committee, released his nominees for the 2020 Democratic National Convention committees. The lists are stacked with industry insiders and lobbyists, consultants and people who sit on the boards of many of the same health insurance and pharmaceutical companies that the most progressive Democratic campaigns have promised to rein in or even to regulate out of existence. These people will manage the convention and help determine its platform. But what they’re really doing is jockeying for a position in the next administration—either for themselves, or on behalf of their businesses and corporate clients.

One member of the platform committee is Meghan Stabler, an e-commerce executive and longtime LGBT activist—who also happens to sit (as the Washington Post’s Dave Weigel noticed) on the board of Democratic Majority for Israel. Perez had, in other words, asked someone involved in a dark money group that is currently funding attack ads against one of the Democratic frontrunners to help craft the party’s platform.

This is what the amorphous “establishment” looks like on one end. On the other, beyond the elected officials and donors, is the class of semi-permanent staffers who populate Democratic administrations and decamp to think tanks (or even scuzzier appointments) when out of power. When it comes to foreign policy in particular, the people available for hire have usually held a position in a previous administration, which is why Democratic presidents never seem to be able to break from the foreign policy consensus. They may justify their foreign policy decisions with liberal, internationalist arguments rather than neoconservative ones, but the outcome is always the same: interventionism and militarism.

The point of an organization like the Center for American Progress, the well-funded liberal think tank, is to create both an agenda and a staff for the next administration. On foreign policy, they are not so much in the business of creating new ideas as they are determining which ideas are heard. A few weeks ago, CAP held a “Progressive National Security Conference,” which they described as an “effort to develop an actionable, off-the-shelf 100-day plan outlining the executive actions, diplomatic priorities, and policy implementation activities that will be critical to advancing a progressive national security and foreign policy agenda in 2021.”

Participants ran the gamut from former top Clinton advisers to former Obama administration members: Jake Sullivan, Samantha Power, Michele Flournoy, Denis McDonough, Ambassador Susan Rice, and a host of former Pentagon and State Department officials who hope and expect the next president to pick up where their former boss left off. CAP is promoting, in other words, a restoration.

Simply picking up where we left off may be an attractive idea if you believe that the Democrats had a cogent foreign policy of their own before Trump was elected and that national security consensus was, by and large, working well. But if you happen to believe that we should question that consensus in light of, say, the Afghanistan Papers, or the war the United States has sponsored in Yemen, or our continued military presence in the Middle East, you aren’t likely to find many who share your views in Washington’s liberal establishment.

Of all the differences between Sanders and the rest of the Democratic frontrunners, one stands out: He rejects the Democratic foreign policy consensus—and, more importantly, the specific people who have stewarded it for decades; the other candidates do not. Sanders is neither a radical anti-imperialist nor is he a committed pacifist. For the most part, his views seem to be much more moderate than his critics suggest. But he is clearly a natural skeptic of American power—and in Washington, such skepticism is so rare that it often passes for radical. The person who has perhaps done the most to guide Sanders’s foreign policy platform during this election is his primary foreign policy aide, Matt Duss. Unlike nearly all the other campaign advisors hired by the rest of the field to help craft their foreign policy platforms, Duss is an outsider and another natural skeptic of American power.

Elizabeth Warren is the candidate whose foreign policy language most superficially resembles Sanders’s; she, too, promises to do good, or at least fewer evil, things with American power. But on this subject, even more so than on others, personnel is policy: Her team is made up of the sort of people who have been in charge and would be in charge in any other conventional Democratic administration. CNN’s recent look at her foreign policy beliefs described her campaign as attracting “a number of career diplomats who say Washington, as one adviser described it, is in urgent need of a ‘substantial rethink’ of how it conducts foreign policy.” But the people assigned to do the rethink are largely the ones who did the first think. Nearly every participant at that CAP event could slide seamlessly into a Warren administration.

Her top foreign policy aide, Sasha Baker, is a “former deputy chief of staff to ex-Secretary of Defense Ash Carter.” Another adviser is Ilan Goldenberg, “former chief of staff to the Special Envoy for Israeli-Palestinian Negotiations in the Obama State Department.” And Jarrett Blanc, “former coordinator for the Iran nuclear implementation at the State Department and acting special representative for Afghanistan and Pakistan under President Barack Obama.”

Blanc has assumed a lead role in corralling a group of outside foreign policy advisers helping the Warren campaign. According to the campaign, it includes Alexandra Bell, former senior adviser to the Under Secretary of State for Arms Control and International Security, Brittany Brown, former acting senior director for African Affairs at the National Security Council, Hady Amr, former deputy special envoy for Israeli-Palestinian negotiations, Mike Fuchs, former Deputy Assistant Secretary of State for East Asia and Pacific Affairs and Laurel Miller, former acting special representative for Afghanistan and Pakistan.

These are all presumably well-intentioned people who want to make the world a better place, and they obviously joined Warren’s campaign because of their experience and their expertise. But that meritocratic deference to establishment experience has landed the United States in trouble before. Barack Obama also ran for president as a critic of America’s foreign policy establishment (his top foreign policy aide even nicknamed it The Blob). But Obama also sought to enlist experienced foreign policy advisers who adhered to the status quo view of America’s place in the world: Ever the conciliator, he made career-long hawk Hillary Clinton his first Secretary of State and left a Republican in charge of the Department of Defense for much of his first term. He let his vice president (another current frontrunner for the Democratic nomination) serially undermine his attempts to rein in Benjamin Netanyahu and repeatedly did things that he seemed instinctively to resist—like stepping up the war in Afghanistan, or supporting the Saudi war in Yemen—because the serious professionals in his administration convinced him he had no alternative.

Warren could well repeat these mistakes if she fills her administration with the same kind of people who staff her campaign. But it seems doubtful that Sanders would do the same, considering the sort of people advising him now. That list does include some fairly conventional choices, including an Obama veteran or two, but it also includes respected experts who are pointedly not part of the existing Democratic national security industry. His cabinet and administration would probably not look like Obama’s—there would be fewer people trying to convince him to take the conventional, interventionist approach—and in that sense, it will represent a meaningful break from the status quo.

That is perhaps why party insiders are trying so hard to stop Standers, while ignoring the other Democratic candidates. Warren’s domestic agenda may pose just as much of a threat to business leaders and insurance company executives as Sanders’s, but it will (they imagine) be easier to stop in Congress and the courts. For The Blob, a Sanders presidency could mean being frozen out of power. For the rest of us, that may be the most compelling argument for his candidacy.