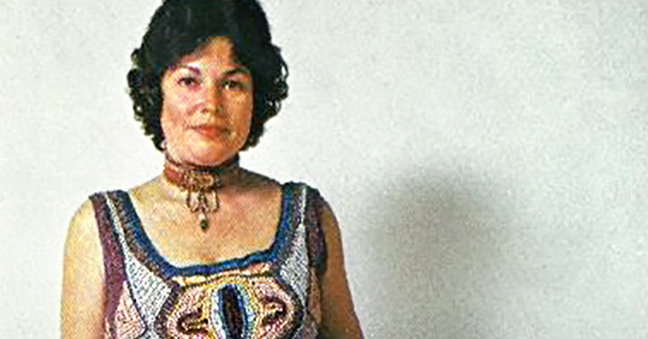 Del Pitt Feldman, whose crocheted designs embraced a homegrown technique that had been relegated to potholders and simple scarves and helped redefine it as a respected medium for fashion and art, died on Jan. 14 in Mechanicsburg, Pa. She was 90.

Her daughter Melissa E. Feldman confirmed the death, at an assisted living facility.

The clothes were sold mostly at Studio Del, a boutique she opened in 1965 on East Seventh Street in Manhattan’s East Village. The garments — including open-weave vests, string bikinis, minidresses and capes — seemed to capture the freewheeling spirit of the neighborhood and of the 1960s counterculture. Her clientele included Janis Joplin, Jimi Hendrix, Grace Slick and Andy Warhol.

High-profile women like Cher and Lily Tomlin also wore her clothes, but Ms. Feldman was unimpressed by celebrity status. When Ms. Joplin walked into the store and asked to try on a small top that was hanging in the window, Ms. Feldman declined, telling her she was too big for its trim dimensions, her daughter said.

Ms. Feldman’s work, which also included hand-crocheted items for the home, tended to be in free-form patterns instead of more traditional straight lines. That style resonated in the hippie era.

“That was the point: that it was not granny squares and doilies and all kinds of things we associated with our grandparents during the 1960s; that it could be contemporary, that it could be creative,” Dilys E. Blum, co-curator of “Off the Wall: American Art to Wear,” an exhibition on view at the Philadelphia Museum of Art, said in a phone interview.

Ms. Feldman’s store, a narrow space decorated with vintage wooden furniture found at junk shops, had a homey feel. More often than not she could be found there in a large rocking chair crocheting. Classes were held in the back; a wide array of yarn was for sale, as were tools for knitting and crochet.

By the early 1970s, the store had become a de facto clubhouse for a group of female artists who were working in crochet, among them Dina Knapp, Sharron Hedges, Arlene Stimmel and Nicki Hitz Edson, who worked in the store for a few years. Ms. Feldman, who was older than the others, called herself “the mother of the movement,” her daughter said.

Julie Schafler Dale, who in the early 1970s founded the influential Manhattan store Julie: Artisans’ Gallery, said Ms. Feldman’s shop had been “a magnet for these young women who were interested in using yarns to create innovative new forms and wearable pieces.”

“That was key in sustaining what people were doing at that time,” she added.

Ms. Feldman also wrote books offering instructions, images and encouragement to readers to work beyond the constraints of standard patterns. “Crochet: Discovery and Design,” published in 1972, was praised in The New York Times for going “beyond baby booties and into ideas that could turn into works of art.” A follow-up, “The Crocheter’s Art: New Dimensions in Free-Form Crochet,” was published in 1974.

“She did want to teach people the basics and then encourage them to go off on their own: to be creative and ‘don’t be afraid to try things and just see what your mind can conjure up with your crochet,’” Gwen Blakley Kinsler, founder of the Crochet Guild of America, said by phone.

Delores Pitt was born in Chicago on Feb. 23, 1929, to William and Serene (Davis) Pitt. Her father was a kosher butcher, her mother a seamstress. Both parents were immigrants, her father from Poland, her mother from Hungary. The family moved to the East Flatbush area of Brooklyn a few years later.

The household was frugal, but even as a child Delores was creative and resourceful. When Delores was about 10, her mother considered buying a Halloween costume to be a frivolous expense, so Delores created a makeshift Tin Man ensemble using aluminum foil from the kitchen. She also learned to crochet as a child.

She graduated from Samuel J. Tilden High School in Brooklyn in 1945 and married George Feldman, an advertising copywriter, the next year. Before focusing on crochet, she was an amateur sculptor and studied with Chaim Gross and Bruno Lucchesi.

By the early 1980s, Studio Del had closed and Ms. Feldman had developed bursitis, which put an end to her professional crocheting. She was a spokeswoman for DuPont’s line of yarn for a few years and also took up pottery, which she occasionally sold. She suffered from worsening symptoms of Alzheimer’s disease over the last decade.

Her husband died in 2013; a daughter, Lori Feldman, died in 2006. In addition to her daughter Melissa, she is survived by a son, Geoffrey; a sister, Florence Harris; and three grandchildren.

Even after she officially gave up crocheting, Ms. Feldman sometimes made pieces for her family, typically with her usual disregard for convention. A sweater for her first grandson, for example, was made with Velcro patches affixed to small crocheted stuffed animals to keep him entertained.

“She wasn’t afraid to go monumental or outrageous with anything that she was doing,” her daughter said.