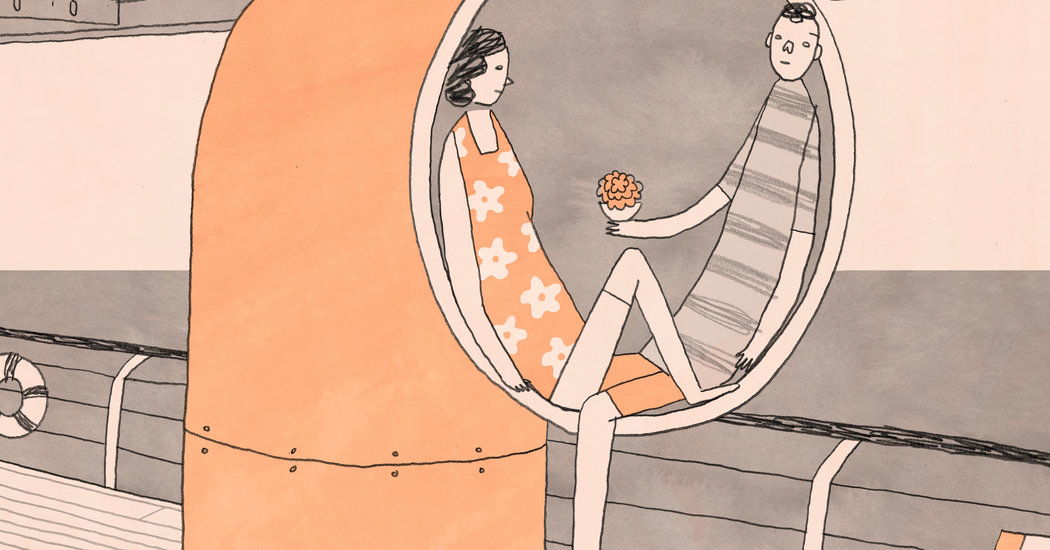 Among the many nicknames Erik had for me, my least favorite was Tinder. He had picked it not only because it rhymed with my last name, but also because, as he knew, I had done a lot of online dating before fleeing to take this job on a cruise ship.

The position sounded fashioned from my fantasies: I would teach writing for Semester at Sea while our seven-story cruiser sailed west from California to England, crossing three oceans and porting in a dozen countries. At sea, I would get distance from Brooklyn and the abiding sense that something was missing in my life there, because I was past 30 and unpartnered.

Erik was a music professor on the ship, but it took us half of the Pacific to intersect. Shorter than me and a little younger, Erik was the kind of guy who knew Kurt Cobain’s birthday, death day and shoe size. I often sported a blue jumpsuit; Erik rocked out skinny jean shorts. On Tinder, we would not have swiped right.

It takes nearly three weeks to cross the Pacific, plenty of time for claustrophobia to grow. I handled mine by hiding out in a corner of deck five, where it was just me and the sea’s roar. But it turned out deck five was an escape for Erik, too — a nine-yard stretch he jogged over and over, desperate for exercise. Sooner or later, in our aloneness, we were going to find each other.

[Sign up for Love Letter, our weekly email about Modern Love, weddings and relationships.]

The thing about a ship is that it lends you so many passes at the people around you. On land, first impressions are everything. At sea, it’s about the 15th impression, the 29th. It’s about tight quarters creating the space to actually get to know a person. To realize you had maybe read the signs too fast.

Online dating had made me so quick to dismiss any man who didn’t match the blueprint of my dream partner: a sweet man with world-class listening skills and a wicked wit. On every app I used, the task was to sift, to narrow down, to eliminate. There were always more options, so why not keep looking? Only at sea, once I had shoved my useless smartphone in a drawer, did I realize how oppressive all that choice was.

When my chunky, plastic cabin phone rang at night, I could answer with “Yo,” knowing it was Erik. When we talked, his gravelly voice sounded strangely proximate, right there in my earlobe. Forty minutes would pass easily before we hung up.

Back in Brooklyn, whenever my roommate and I had come home to each other after a bland date, we would declare our verdict with four words: “No sense of infinitude.” With Erik, I felt infinitude, though not because of compatibility. Erik puzzled me; I puzzled him. He was curt and uncensored, lacking the gentle, nodding manner I was certain I needed in a mate. He never intended to hurt my feelings; he just wasn’t intuitively literate in them.

Challenging me was like sport to Erik. Whenever I mentioned urging my students to capture the details of the world, he would say, “I hate that verb,” and pull me into another debate about the colonialist roots of travel writing. It drove me nuts, and also made me think harder than ever about the material I taught.

As we neared China, and I told him that I was dreading Shanghai because of memories of eating at a noodle restaurant there with my ex.

Nothing sounded more painful, and that’s precisely why it begged doing. A life of swiping left and right had kept me in flight from my ache. The imperative of this time at sea was to sit with my discomfort, both in the stubborn shadow of my last love and the startling light of this new one.

Erik had a long-distance transmitter radio with him that he toyed with whenever we neared land, holding the antennae over the open sea like a determined fisherman. When we finally picked up the tinny burst of a Bollywood tune near the Andaman Islands, Erik’s head whipped toward me, jaw dropped.

I felt both whiny and drunk on the majesty of our sea existence that night. Whiny because I didn’t want it to end, because I couldn’t bear returning to New York, to a life in which I ordered dates on my phone as casually as Thai takeout. I cried out to Erik that I just wished real life could be like this. His blunt reply: “If your life isn’t something you want to go back to, well maybe you should think about that.”

One day on the Indian Ocean, my cabin phone rang at an hour when Erik never called: lunchtime. As soon as I heard his voice, I knew something was up. He and I were nearing a point of no return, and I was petrified. It’s a maritime custom that when you cross the Equator, you leap into a pool of green water and kiss a dead fish on the lips. Before, you’re a polliwog. After, a shellback.

“I have something to tell you,” he said.

“Yeah. I have feelings for you and I’m coming over to kiss you.”

When Erik appeared at my cabin door, I was pacing, red-faced. I sat on one bed. He sat on the opposite bed. One of us said, “This is so awkward.” The other said, “This is so fifth grade.” Erik switched to my bed and planted — from the side — a sloppy kiss on the edge of my lips.

Everything changed, and also didn’t. Whenever we made out on my skinny cabin beds, he would smear my hair into a mess, preferring the more disheveled version of me. We left notes on each other’s cabin doors, and then small treats. After India, I came home to a single marigold in a glass cup. After Mauritius: a heap of roasted almonds.

In every port, I had balked about merging our plans, but in Namibia, our third-to-last port, Erik and I rented a car and stopped at every beach where a wrecked ship summoned the junk-lovers in us. In the desert, we chased ostriches, who ran off like clumsy ballerinas. It had been so long since I had felt this cracked open to a person, and the word love felt like a force rising within me.

On our final Namibian morning, I blurted something that felt both true and preposterously qualified: “There’s a way in which I love you.”

In fact, there were many ways. I loved his capacity for wonder, the unabashed way he said, “Wow!” I loved how he had a new, nonsensical nickname for me every other day: Duder, Larry, Bud. And though I bristled when Erik criticized my word choice or claims, and I knew I couldn’t sustain that level of friction long-term, I swelled with appreciation for this man as our time together dwindled.

The night before our cruise ended, I could feel our ship’s culture begin to dissolve like a dream upon waking. All the traditions and secrets, the door notes and nicknames — none of it would matter once we ported. Our faculty lounge felt like a tailgate party, a nightclub and the airport departures lounge rolled into one.

All this made my lips loose. Erik and I had taken pains to keep our romance private, but on the last night, I wanted to confess, and I did. One colleague said, “If you guys get married, I better be invited to the wedding!” Another responded with a wry smile: “So is this like a ship thing?”

“Crushes thrive in small spaces,” writes the novelist Heidi Julavits in her book “The Folded Clock.” “Without the element of choice, and in conjunction with captivity, you find love, or at least you find lust.”

In my case, however, captivity is precisely what freed me from that narrow love-lust binary. Captivity broke down my dating defaults and allowed me to just be with this man, who made me think harder, laugh louder and finally lower the shield from my heart.

A forever, or a fling: People will say it has to be one or the other. But what grew between Erik and me was a magnificent something-else, and it delivered me back to New York with the conviction to leave and close that chapter of my life for good.

I write this from inside of my first year of marriage, not to Erik, but to a man whose rightness felt as obvious on the surface as it did in the core. Daily, I feel the grounding calm that comes with finding a person who feels right in all the crucial ways. But none of that diminishes my gratitude for my stormy lap of the world with Erik. I now think we’re lucky if life sends us circuitously in the direction of our ultimate partner.

Blessed are the tangents, I say. Glad to be home, but I wouldn’t reroute a thing.