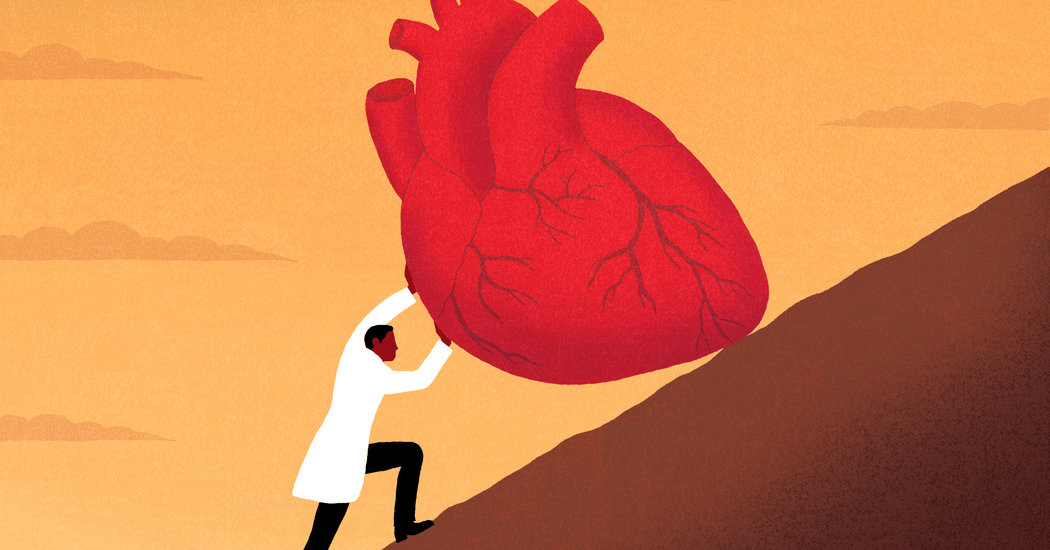 A few months ago, an ambulance brought a woman in her 90s to the emergency department at Brigham and Women’s Hospital in Boston.

Her metastatic breast cancer had entered its final stages, and she had begun home hospice care. Yet a family member who had discovered her unresponsive that morning had called 911.

The paramedics determined that she was in cardiac arrest, began cardiopulmonary resuscitation and put a breathing tube down her throat.

“It’s a common scenario,” said Dr. Kei Ouchi, an emergency physician and researcher at Brigham and Women’s who reviews such cases. “And it’s not going to have a good outcome.”

At the hospital, the patient’s blood pressure continued to fall despite intravenous medications. “She was trying to die, and it was only a matter of time before she arrested again,” Dr. Ouchi said.

An oncologist and emergency physicians met with the patient’s family, and explained that her odds of survival were extremely low and that she might well suffer permanent cognitive damage even if she lived. The family agreed to stop resuscitation and return to comfort measures, and the woman died within 24 hours.

Dr. Ouchi’s question: “Should CPR even have been started for this patient?”

It’s a question arising with greater frequency as more people live to advanced ages, when the odds of surviving an out-of-hospital cardiac arrest after CPR are grim, and the chances of avoiding significant neurological disability are worse.

“Many of us in daily practice have the perception that we regularly do resuscitations that are futile from the inception,” said Dr. Patrick Druwé, an intensive care physician at Ghent University Hospital in Belgium. “We wanted to examine that.”

Dr. Druwé’s team organized an international network to survey health care professionals in Europe, Japan, Israel and the United States. The group’s latest study, published in the Journal of the American Geriatrics Society, looked at CPR for adults over 80 who suffered out-of-hospital cardiac arrest.

The results spotlight not only their dismal survival rates — already reported in the medical literature, though probably not widely understood by the public — but how often health care professionals support resuscitation anyway.

In this sample, about 600 clinicians — half paramedics and emergency technicians, the rest emergency physicians and nurses — were asked to recall their most recent patient over 80 who had undergone CPR.

Did the clinicians fully agree with starting resuscitation? Did they feel sure resuscitation should not have been started? Or were they uncertain?

Only 2 percent of these patients survived long enough to leave the hospital. Yet more than half the health care professionals thought CPR was appropriate in those cases. Only 18.5 percent thought it inappropriate.

In cardiac arrest, a minority of patients have what’s called a “shockable” rhythm: The heart is moving, but abnormally, and it is not pumping blood effectively. Using CPR and then a defibrillator to shock the heart can restore circulation and save the patient’s life.

But for patients with so-called non-shockable rhythms — whose hearts show electrical activity yet are not pumping at all — survival rates fall sharply.

The researchers also found that more than 40 percent of these cases were “unwitnessed,” meaning that because no one saw the victims collapse, rescuers had no information about how long they had been in arrest — a crucial factor when the odds of successful resuscitation diminish by 10 percent with each minute.

None of the elderly patients with non-shockable rhythms and unwitnessed arrests survived hospitalization. Yet about 44 percent of the surveyed clinicians thought those attempts, too, were appropriate. Nursing home residents had particularly dire outcomes.

The study had limitations, including its reliance on clinicians’ memories. But other research has documented bleak outcomes after CPR for out-of-hospital cardiac arrest at advanced ages, even though resuscitation results have improved over all. (For hospitalized patients, it succeeds more frequently.)

In San Mateo County, Calif., researchers found that of patients over 80 with unwitnessed arrests and non-shockable rhythms, none survived to hospital discharge.

Among medical organizations, “the big ethics discussion has been around, ‘When do we stop?’” said Dr. Monique Starks, a cardiologist at the Duke University School of Medicine and an author of an editorial accompanying the study. “Only recently have there been discussions about, ‘When do we start it?’”

Emergency responders in the United States typically default to what one research team called a “maximalist” strategy. But as with any intervention, CPR has its own risks: broken bones, lacerated organs, trauma for the patient and family, expense, diversion of emergency services from patients more likely to benefit, even traffic deaths.

Such policies also may not acknowledge older adults’ specific risks or values.

“As a resuscitation researcher, I want to save everybody,” Dr. Starks said. “But I think we’ve entered this zone where we’re trying to escape ordinary death.”

Of course, a few seniors do well after resuscitation. “An older person in good physical condition who has a shockable rhythm — it can work,” Dr. Druwé said. “But you have to be lucky.”

Ray Dubrowin had that sort of luck. At 89, despite aortic stenosis, he had joined a gym in suburban San Diego and was working with two trainers there when he collapsed. The trainers, Army veterans, began immediate CPR.

At the hospital, his daughter recalled, his family and doctors were planning for hospice care when Mr. Dubrowin began to regain consciousness. In two weeks, he returned to his normal routines and had two more good years before dying suddenly at home.

But such recoveries, the stuff of everyone’s hopes, occur rarely among older adults. Aside from that, prolonged life may not be their primary goal. Informed about the realities of CPR, “if they have a high probability of mental or physical disability, they’re less likely to want it,” Dr. Druwé said.

While professional organizations grapple with guidelines for starting and stopping resuscitation, older adults can make their wishes known by discussing them with their doctors and families, then documenting them in advance directives.

Because do-not-resuscitate orders apply only in hospitals, states began adopting non-hospital D.N.R. policies in the 1990s. But there is a newer and more comprehensive document, covering a variety of health care choices beyond resuscitation and carrying legal weight in any setting, called a Polst (short for “physician orders for life-sustaining treatment”).

Meant for people with serious illnesses at any age, Polst programs are available in nearly every state, though forms and names differ. The Polst website provides state-by-state information.

For now, CPR remains the default for almost everyone, including very sick and frail older patients with poor prognoses.