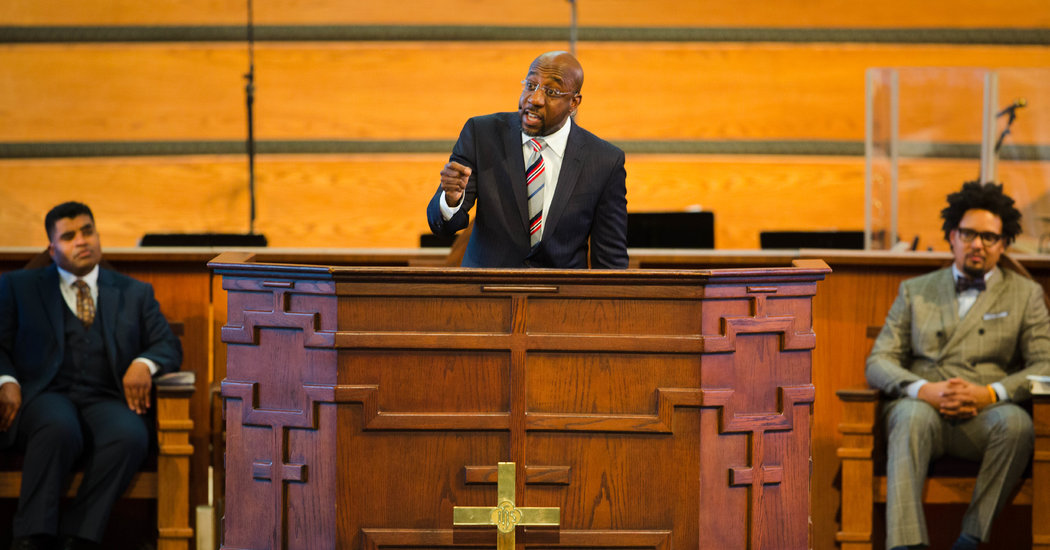 ATLANTA — Ebenezer Baptist Church bills itself as “America’s Freedom Church,” a reflection of its lofty stature as the house of worship where the Rev. Dr. Martin Luther King Jr. once preached. Over the decades, the 6,000-member congregation just east of downtown Atlanta has become a favored stop for national politicians seeking to make their case to the African-American community and pay homage to the slain civil rights icon.

But this week, Ebenezer transformed from political venue to political launching pad when its senior pastor, the Rev. Dr. Raphael G. Warnock, a Democrat, entered the race for the United States Senate seat recently vacated by Johnny Isakson, a Republican who cited ailing health as his reason for resigning with three years left in his term. The move is likely to alter the way the powerful King legacy resonates in the state, particularly because Dr. King declined to run for public office, preferring to effect change through direct social action.

In a phone interview on Thursday afternoon, Dr. Warnock, 50, said he respected that position, but noted that he had also spent a number of years before coming to Ebenezer as a pastor at New York City’s Abyssinian Baptist Church. It was there that another of Dr. Warnock’s civil rights heroes, the Rev. Adam Clayton Powell Jr., once preached, and Mr. Powell had no reservations about entering the political fray, serving in Congress from 1945 to 1971.

“Yes, it is, for some people, an extraordinary step for a clergyperson to operate beyond the pulpit and enter the rough-and-tumble of politics,” Dr. Warnock said. “I am aware of the risk. But I am embracing it because I think the times demand it.”

The times, he added, were extraordinary: “The soul of our democracy is imperiled.”

Dr. Warnock’s widely anticipated video announcement on Thursday upended the conversation about the November elections in Georgia, a once reliably red state where Democrats are making serious advances, powered by growing ethnic and racial diversity, a dissatisfaction with President Trump and their argument that Republicans engaged in minority voter suppression in the 2018 governor’s race.

Stepping into this mix is a preacher who, though politically untested, has carried on with Dr. King’s work. Dr. Warnock’s cachet is both powerful and rare, as he is only the fifth senior pastor of Ebenezer in its 134-year history. Democrats hope his candidacy will resonate with base voters and moderates as he seeks to unseat Senator Kelly Loeffler, a Republican businesswoman who was appointed to the seat last month by Gov. Brian Kemp, also a Republican.

Democrats are also hoping that Dr. Warnock will reignite the coalition that turned out in 2018 for Stacey Abrams, the Democratic candidate for governor who lost to Mr. Kemp by roughly 55,000 votes. Ms. Abrams declined to run for the Senate in 2020, but she has pledged to spend the year stumping energetically on behalf of the state’s Democratic slate. Dr. Warnock could be crucial in motivating black voters who turned out for Ms. Abrams.

Late Thursday, she endorsed Dr. Warnock, who until this week served as chair of the New Georgia Project, the nonpartisan voter registration group that Ms. Abrams founded.

“We stood shoulder-to-shoulder on the toughest fights, against opponents who used their power to belittle and erase their fellow Georgians,” she wrote in a fund-raising email.

“He’s someone that the Democratic Party believes that they can build a strong candidacy around and rally the Democratic base,” said Kerwin Swint, chair of the political science department at Kennesaw State University.

Dr. Warnock, the senior pastor at Ebenezer since 2005, has a long record of speaking out in favor of liberal causes, favoring abortion rights and expanding Medicaid under Obamacare. He had toyed with the idea of running against Mr. Isakson in 2015 but eventually declined. This year’s race will be closely watched nationally, as Republicans seek to hold on to their three-seat Senate majority.

The other Georgia seat, held by Republican David Perdue, will also be on the November ballot. But it is the seat formerly held by Mr. Isakson that has generated the most drama.

This week, Representative Doug Collins, a Republican, announced he was also jumping into the race, angering Republicans who prefer to maintain a unified front. Mr. Collins has been a staunch defender of Mr. Trump during his impeachment, and the president had hoped that the governor would instead name him to the open seat.

While the State Legislature is considering a bill that would establish a party primary in the Senate race before the November election, as it stands, all candidates will appear together on the November ballot.

In addition to Dr. Warnock, Mr. Collins and Ms. Loeffler, the slate currently includes two other Democrats: Matt Lieberman, the son of former United States Senator Joe Lieberman, and Ed Tarver, a former federal prosecutor. If no candidate gets more than 50 percent of the vote, a runoff election will be held in January.

Dr. Warnock could benefit from Republicans’ divided loyalties. And while his religiosity may help him in a deeply religious state, he will also most likely be attacked for liberal positions. In 2017, he and other members of the clergy were arrested in Washington for peacefully protesting proposed budget cuts and proposed changes by Republicans to the health care system.

“The thing about Rev. Warnock is that he hasn’t stuck to stories about Jesus,” said Brian Robinson, a political commentator and former spokesman for the former Gov. Nathan Deal, a Republican. “He hasn’t stuck to the Bible. He has waded into political debates. There will be plenty of tape with past statements that will probably raise eyebrows with that middle-of-the-road electorate that’s the margin of victory in Georgia.”

In 2018, however, Ms. Abrams showed that Georgia Democrats may no longer need to run to the political center to mount viable statewide campaigns.

“Being pastor of Ebenezer puts him in a position to appeal to older, more conservative African-Americans,” said Andra Gillespie, associate professor of political science at Emory University. “But because he is so progressive in his political leanings he has the ability to excite the left flank of the Democratic base in the state.”

Despite Dr. King’s refusal to run for office — liberal Democrats sought to recruit him to run for president in 1968 on an antiwar presidential ticket with Dr. Benjamin Spock, the baby-care expert — African-American preachers have a long history of involvement in electoral politics. The first African-American in Congress, the Rev. Hiram Rhodes of Mississippi, was a minister in the African Methodist Episcopal Church.

Dr. Warnock will have to tread carefully as he seeks office while also maintaining his position at Ebenezer Baptist, given the political restrictions on churches that wish to maintain their tax-exempt status. In the video announcing his candidacy, for example, Dr. Warnock talks about his rise from Savannah public housing to the pastor at Ebenezer while a legal disclaimer flashes underneath: “Title and affiliation are provided for identification purposes only.”

Ebenezer Baptist is generally considered as hallowed ground to Georgians of both parties, and Dr. King is almost universally recognized as a state hero: Mr. Robinson called him “one of the greatest Georgians to walk the earth.”

Mr. Robinson accused Dr. Warnock of politicizing the celebrations of Martin Luther King’s Birthday, pointing to previous visits by Mr. Deal and the most recent celebration this month at Ebenezer, which was covered by The Atlanta Journal-Constitution. With Ms. Loeffler and Brad Raffensperger, the Republican secretary of state, in attendance, Dr. Warnock ripped politicians who “offer platitudes” to the King name while “supporting voter suppression and voter purging and unnecessary programs like ‘exact match,’ racial gerrymandering” — a litany of Democratic Party criticisms of Republican voting policy.

“It’s increasingly difficult for people who aren’t partisan Democrats to participate in what’s supposed to be a national celebration because they’re made to not feel welcome,” Mr. Robinson said.

Dr. Warnock on Thursday spoke of politics as an inevitable reality for a person with his job. “Listen, politics is inescapable whether I choose to run or not,” he said. “We may all choose to live in our faith, but we live under the law.”