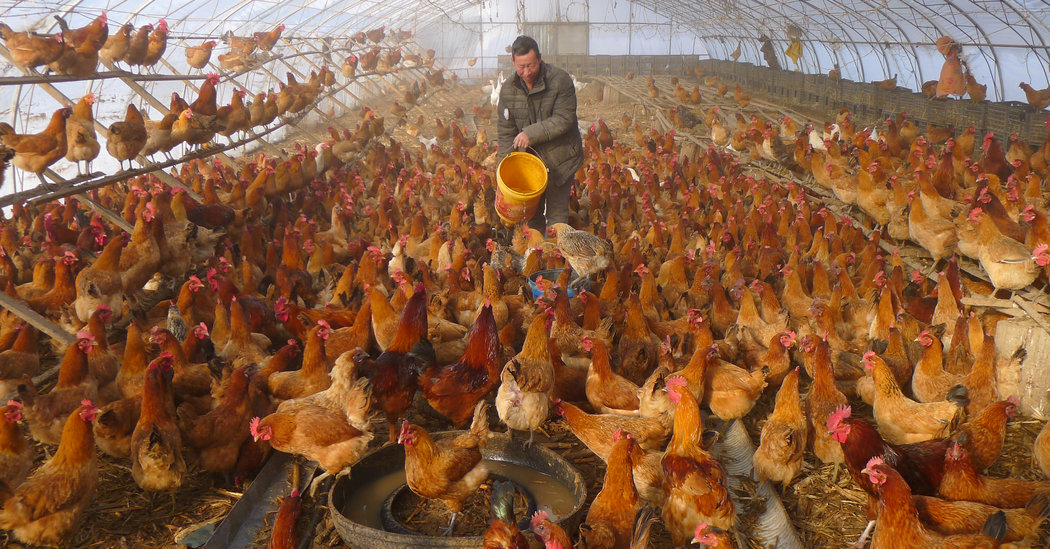 The fifth day of the Lunar New Year holiday, which fell on Wednesday, is when people in China welcome the god of fortune into their homes. This year, business owners like Qiu Xiangjian would be grateful if the god merely helped them get by.

Mr. Qiu, a 50-year-old farmer in Jiangsu Province, woke up that day to some troubling news. To battle the coronavirus outbreak spreading across China, the provincial government had ordered businesses except those necessary for daily life such as utilities, pharmacies and supermarkets to close until Feb. 10.

He can’t sell his chickens to slaughterhouses or meat markets. He had only two days of feed left for his 40,000 chickens, but all the feed factories had been shut down. If he can’t stock up on feed, he will watch his chickens starve.

China’s giant and tireless business machine came to a sudden halt last week. Many parts of the country implemented official and voluntary lockdowns to combat the pneumonialike outbreak, which has killed over 200 people and infected thousands. Big companies like Apple, General Motors, Ikea and Starbucks are closing operations, changing the way they do business or preparing for financial hits.

They won’t be the businesses hit the hardest. Those would be China’s entrepreneurs — the farmers, shopkeepers, noodle stand owners and millions of others who delivered China out of the chaos of the Cultural Revolution and turned it into an economic powerhouse.

Many were already struggling with China’s slowing economic growth and increased government meddling. The virus outbreak exacerbated the situation — or, as people in China say, added frost on top of snow.

“My goal for 2020 isn’t growth but survival,” said Zhang Huan, an investor and entrepreneur in Guangzhou, a port city just northwest of Hong Kong. “We’re all one or two months away from bankruptcy.”

Their problems could be felt around the world. China’s small- and medium-size businesses are an important part of its growth engine. Vice Premier Liu He, the country’s economic czar, has repeatedly said that they contribute more than half of China’s tax revenues, 60 percent of its economic output and nearly three quarters of its technological innovation.

The Chinese government has tried to ease their anxiety. Officials on Sunday ordered banks to go easy on people hit by the crisis who are struggling to repay their mortgage and credit card debt. It also encouraged more loans and lower interest rates for businesses that have been severely affected.

The guidance, was vague, however, and it doesn’t begin to address the breadth of problems.

Those problems go beyond officials forcing businesses to close. Routes from one part of the country to another have been frozen. Some cities require companies to pay employees for their idle time. Those efforts could help keep people content, but they still represent a cost for business.

Wang Chenyun, an internet entrepreneur, complained in his personal blog that the Shanghai municipal government not only extended mandated holidays to Feb. 9 but also required businesses to pay double wages to employees working from home.

“The Shanghai government pays too much attention to big enterprises,” he wrote. “It doesn’t care whether small businesses can survive.”

Their plight speaks to China’s lack of checks and balances. The Chinese government’s firm control of the levers of power lets it mobilize resources to build huge infrastructure projects and combat an epidemic. It can also empower officials to go too far. Without an independent court system or a free news media, businesses have few ways to protest a policy or ask for help.

Speaking out would be difficult even in better circumstances. Broadly, businesses from hotels, restaurants, department stores to farmers like Mr. Qiu believe Chinese officials are justified in moving forcefully and dramatically to stop the spread. (The government has also been criticized for its slow response and for punishing those who tried to sound early warnings, so it feels tremendous pressure from the public to act.)

But the government’s top-down, command-and-control approach to the economy doesn’t take into account the transformations within the country’s vibrant and dynamic economy, and may make it slow to respond to signs of distress from entrepreneurs.

New highways and rail lines have made even the most rural parts of China dependent on other places. Mr. Qiu, for example, has problems beyond closed slaughterhouses and supply sources. Even if he could find supplies in other provinces, roads are closed for all nonlocal vehicles. The roads to his village have been blocked with piles of dirt.

“If this continues, it will affect the chicken, eggs and the other meat supplies nationally in a few months,” Sun Dawu, a prominent businessman in Hebei Province who owns a company that supplies chicken farmers, wrote on Weibo, a social media site. “It can lead to market panic and affect social stability. I urged the government to take measures immediately.”

China depends more on consumption and personal services than factories than it did during the 2003 outbreak of SARS, another dangerous disease, which had a dramatic but short-lived impact on China’s growth.

Many of the country’s restaurants have closed for the time being. Haidilao, one of China’s biggest restaurant chains, shut down all of its 550 branches in the mainland. Beijing Dadong Roast Duck, a high-end chain, shut all of its 20 plus restaurants but two in Beijing.

“If things can’t resume to normal in two months, we’ll probably have to shut down our business,” Dadong’s owner, Dong Zhenxiang, said in an interview. He hopes the government can lower taxes, lower rent and provide some subsidies.

Travel is another hard-hit industry, since the Lunar New Year holiday, which began last Saturday, is usually the busiest travel season of the year. Mr. Sun, the businessman in Hebei, said that he had to close a hot spring resort and send all 1,500 workers on holiday. He estimated that he could lose over $7 million from that business alone.

Xu Zhihua, chief executive of sportswear brand Peak, wrote on his Weibo account: “The whole society has come to a standstill with almost zero consumption.” He worries that a lot of small- and medium-size companies won’t be able to pay back their loans. “Then the whole economy will be finished!” he added.

More broadly, the coronavirus crisis emerged at a time when many small and medium size business were already struggling. China’s growth has eased to its slowest pace in nearly three decades. The trade war with the United States has rippled through parts of the country. Many people complain that the state-run banking system won’t lend them money at a reasonable rate.

The Chinese government is also crowding them out. Big state-run companies are taking an increasingly important role in the economy, in a reversal of the trend of opening up to private enterprise that helped drive China’s success. The Chinese government interferes more online and increasingly demands that businesses pay greater heed to directives from the Communist Party.

As the coronavirus has spread, Beijing officials have taken a heavier hand to control prices. For example, the government in Baoding, in the central province of Hebei, fined a shopping mall company nearly $300,000 for selling cabbages and cauliflowers at higher prices. Of course, China is hardly alone in punishing price gouging, and it won public praise for fining some pharmacies for raising prices of face masks, which are in short supply all over China.

“If cabbages were easily available, the store wouldn’t be able to charge higher prices — nobody would buy it,” said Liu Xuanhua, an economist. “If the outbreak continues, our ignorance about the market economy could end with us having nowhere to buy vegetables.”

Some industries, like chicken farmers, are trying to get the government’s attention. Farmers have created a sort of social media campaign to petition the government to open special transportation channels for their supplies.

Even the agricultural bureau in Huangmei County in Hubei Province, the epicenter of the coronavirus outbreak, filed an official plea to the local virus prevention headquarters to ease traffic controls so local farmers could buy feed and medicine, according to a document circulated online.

Mr. Qiu, who hoists a Chinese national flag next to his enormous chicken coops and wears a national flag badge on his black winter coat, said he wholeheartedly supported everything the Jiangsu government had done to combat the virus.

“But I also have real difficulties that require the government’s help,” he said.