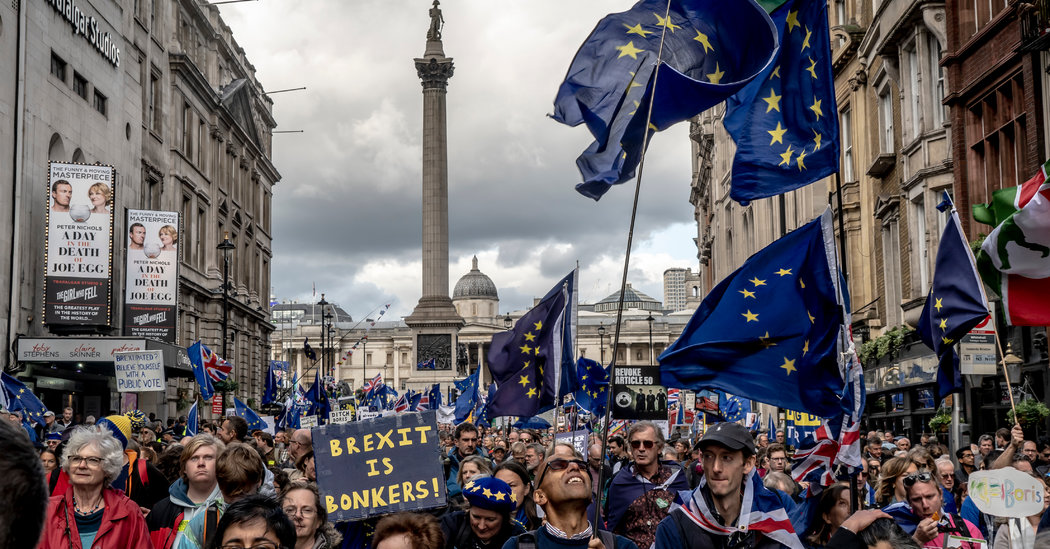 LONDON — They marched by the hundreds of thousands to stop Brexit. They mourned when Prime Minister Boris Johnson walloped their side in the latest election.

And now, on the precipice of Brexit, ardent pro-European Britons, who by some measures outnumber those favoring Britain’s withdrawal from the European Union, are looking for new outlets for their rage — something, anything, to keep from staring into the abyss of a generation-long exile from the bloc.

On Friday, Brexit will pass from the realm of left-wing nightmare to reality. And Britain’s Remainers, who fought for years to stay in the European Union, are reckoning with how to keep afloat a movement that may not get another chance to reverse Brexit for 30 or 40 years.

After going for broke last year with a strategy of trying to undo the withdrawal, they are rallying their weary, despairing supporters for hugely consequential battles ahead over the shape of Brexit, leaning on lawmakers to preserve smooth trading ties with Europe so British workers can keep their jobs.

They are agitating on behalf of Europeans living in Britain who have been refused long-term permission to stay.

And they are trying to deny Mr. Johnson his wish of stashing Brexit on the business pages of the newspapers, arguing instead that now is the very moment when the threat of brutal factory closures and migrant crackdowns needs to be forced on to the front pages.

“For three years, we’ve been in a phony war,” said Naomi Smith, the chief executive of Best for Britain, one of the biggest remaining anti-Brexit campaign groups. “Nobody really felt any of the actual effects of it, because we hadn’t yet had to look at border checks, we hadn’t had to consider what happens to our right to live, work, study and love in another country.”

In many Britons’ eyes, it was remarkable that pro-European Britons mounted a serious fight to overturn Brexit at all. In converting scores of British lawmakers, campaigners turned stopping Brexit from a fringe cause into the largest pro-Europe movement on the Continent.

Enough people changed sides that in many opinion polls before the general election in December, Remainers narrowly beat out the Leavers favoring withdrawal from the bloc. And in the general election, parties that favored rerunning the Brexit referendum won more than half the votes.

But the Remain vote splintered into competing parties, consigning the anti-Brexit side to a historically awful defeat to Mr. Johnson’s Conservative Party.

What followed was a long Christmastime stupor.

“It’s the end of everything you fought for for years, and the end of your vision of Britain for many people as a country they thought of as open and international and rational,” said Ian Dunt, a pro-Remain writer whose book, “How to be a Liberal,” will be released this year. “You obviously get a sense of detachment from your country.”

But the approaching date of Britain’s departure, on Friday, seems to have shaken many people from their daze. In their rage at the government’s migration plans, and their desperation not to sink into years of despair, they said they were looking to the way left-wing voters in the United States reacted to President Trump’s win in 2016.

“In the U.S., we’ve seen mass mobilization in defense of migrants, Abolish ICE protests,” said Ana Oppenheim, an organizer for Another Europe is Possible, a leftist anti-Brexit group. “This is something we have to do here. We can’t let the energy dissipate in a situation where our rights and our freedoms are under threat.”

On university campuses, organizers are advising Europeans about how to apply for permission to stay in Britain, said Eve Alcock, president of the University of Bath students’ union. Pro-Remain groups are now asking Conservative members of Parliament to keep their party from pursuing a sharp split from the European Union, arguing that it would only hurt the blue-collar workers who helped put them in Parliament.

And political operatives are making plans to pounce when Mr. Johnson finally turns his party’s aspirations for Brexit into the hard reality of a plan.

If he tries to preserve close ties with Europe, Mr. Johnson could infuriate hard-line, pro-Brexit voters. But cutting the European Union adrift carries its own risks, especially in ex-Labour heartland seats that are home to automobile or aerospace industry workers who stand to suffer if the bloc responds with trade barriers, as its leaders have promised.

“More than three years on, they still have not defined Brexit,” said Tom Baldwin, who helped run the People’s Vote, the umbrella group that organized marches for a second Brexit referendum. “I’m not sure he knows which ones yet, but Boris Johnson will inevitably betray more people, more promises, and his opponents have a duty to expose that.”

Not that anyone thinks rejoining the European Union is in the cards, at least in the next decade.

Nor do pro-Europeans have access to the same well-funded, data-rich organizations that helped set up the largest rallies last year. People’s Vote split into warring camps in October, with one side trying to turn it into an avowedly pro-Remain organization and the other trying to keep recruiting a broader range of lawmakers.

Another challenge for pro-Europeans in Britain is that, unlike with anti-Trump voters in the United States, there is more than one party competing for their votes, said Denise Baron, a political researcher who has worked for campaigns on both sides of the Atlantic.

While Democrats alone benefited from the swell of anti-Trump sentiment in the 2018 midterm elections, many pro-European voters are waiting for the results of the Labour leadership race this year to decide whether to make that the vessel for their opposition to Mr. Johnson or turn to another party.

And in Britain’s political system, which gives a government with Mr. Johnson’s majority almost total control over what does or does not pass, opposition is a lonely place.

Of all the opposition’s battles ahead, perhaps none has attracted as much concern as the roughly 3.4 million European Union citizens in Britain, some of whom are struggling to secure long-term residency rights and are anxious about being denied housing or jobs.

Tanja Bueltmann, a professor of migration at Northumbria University, said that while the attention was welcome, pro-European campaigners were coming belatedly to the cause, given that the window for easing the process of applying for so-called “settled status” had closed.

Still, some groups that have long been agitating for European citizens, like the3million, have already launched legal action to fight for their voting and privacy rights.

At the Coach & Horses pub, where the3million was hosting a pub crawl, Ms. Luker and her husband, Trevor Luker, who met while working in Frankfurt, said they would wake up Saturday in a different country than the one they had chosen to make their home.

“Most of my life, I’ve been able to move freely throughout Europe,” Mr. Luker said. “All of a sudden, that’s no longer an option. That freedom to pick up sticks is gone.”

The European trading office of Mr. Luker’s financial services firm had already moved to Brussels. With changes like that starting to affect more people, Ms. Luker, a Finnish-American, said she hoped protests to limit the damage of Brexit might catch on.

As people filled the pub, among them a group of pro-Remain Britons who were nevertheless making fun of the Europeans there, Mr. Luker bemoaned the decades of upheaval ahead.

“We might have a hangover tomorrow,” he said, “but the country will have one for the next 20 years.”