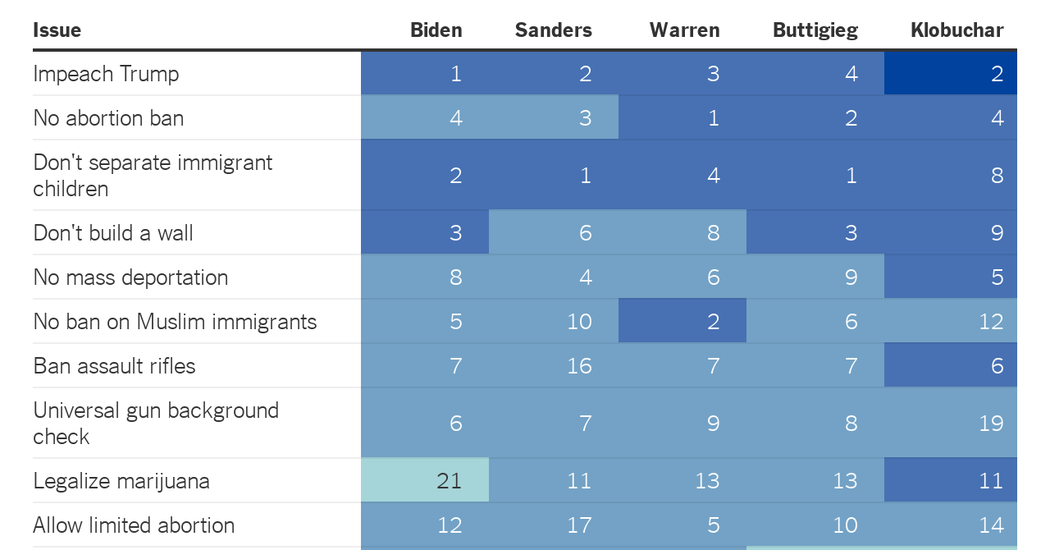 The four Democratic candidates at the top of the polls heading into the Iowa caucuses have been paired by pundits into what they like to call lanes. It’s a highway analogy, as in “stay in your lane.” One, seen as more progressive and liberal, contains Bernie Sanders and Elizabeth Warren. The other, consisting of Joe Biden and Pete Buttigieg, is more centrist and moderate.

But do most voters actually think this way? Our research suggests otherwise. Ideological labels — whether people think of themselves as a liberal or moderate — do distinguish candidates’ supporters. But when it comes to specifics, most Democratic voters have remarkably similar views on policies and prioritize these issues in roughly the same ways.

We interviewed more than 150,000 people around the nation, tens of thousands of whom intend to vote in the Democratic primaries and caucuses. Our data come from the Democracy Fund + U.C.L.A. Nationscape Project and include questions on 41 policies currently being debated. The data span the last six months and cover issues like whether to increase taxes on households earning more than $250,000 a year, or whether transgender people should be prohibited from serving in the military.

As we looked at similarities and differences of views among Democratic supporters of six candidates seeking the presidential nomination for president, we found an impressive amount of consensus, regardless of whom they support.

In addition to asking people whether they agree with policy outcomes, all of them also answered a series of questions that allowed us to measure the importance they attach to each issue. Here’s how that worked: Each person saw two randomly selected collections of up to four policy positions, and we asked them to choose which collection of outcomes they preferred. All of them did this 10 times and, in the course of doing so, revealed which positions they prioritized and which ones were relatively less important.

We compared the outcomes across supporters of the four Iowa front-runners, as well as Amy Klobuchar (although we had less data on her supporters). Despite differences in the demographics of people who support them and their ideological labels, there were few differences in the beliefs and priorities of the candidates’ supporters.

All of the candidates’ supporters wanted to impeach Mr. Trump and placed that issue in the top five priorities among the 41 things we asked about. (We wrote about the prominence of this previously.) But it is not the only thing Democratic voters agree on.

All of the candidates’ supporters believe that preventing a complete ban on abortion is a top priority, with support ranging from 82 percent among Ms. Klobuchar’s backers to 91 percent for Mr. Buttigieg’s, and with priorities ranging from first to fourth in importance.

Not separating children from their families at the border is a popular issue, too. In terms of priorities, it’s the most important issue for supporters of Mr. Buttigieg and Mr. Sanders and comes in second for Mr. Biden’s voters, fourth for Ms. Warren’s group and eighth for Ms. Klobuchar’s.

Other top issues with tremendous support among these candidates’ backers and with high-priority status include not building a border wall, not banning Muslims from entering the country, offering a path to citizenship for undocumented immigrants known as Dreamers and doing background checks before gun purchases.

Enacting Medicare for all is the one health-related policy that voters put in the top half of the 41 issues we asked about, but there weren’t significant differences across the candidate groups: No one’s supporters put it in the top 10.

Mr. Sanders’s supporters may place slightly more importance on subsidizing low-income health care relative to the others, and Ms. Warren’s supporters join them with respect to the importance of providing government-run insurance to everyone, but these differences are not big, and the issues still rank lower than many other policies.

A few interesting differences emerged. The fifth-most important issue for Mr. Buttigieg’s supporters is investing in a big, technology-based solution to climate change — something that all Democratic voters want (almost 90 percent across all the candidates’ supporters) but that no other bloc thinks is a priority. Similarly, supporters of Ms. Klobuchar stood out by ranking 12 weeks of paid maternity leave as the most important issue.

But examples like these were rare. When most people agree on policies, vote choice may largely turn on other factors, like a perception that a candidate is more dedicated to fighting for those policies; the probability of beating an incumbent president in the general election; a wish to give a new generation the chance to run things; the hope of putting a woman in the White House.

Of course, similarities across voters on policy preferences don’t imply similarities across candidates, and some voters will care about the distinctions even if, on average, everyone’s supporters want the same things. What’s clear is that policies aren’t driving division among most of the supporters of these candidates. If there is a fight for the future of the Democratic Party, it doesn’t appear to be playing out in terms of what voters want from their government. On that, no matter whom they may vote for in the primary, Democratic voters appear to be driving on a one-lane road.

Lynn Vavreck, the Marvin Hoffenberg Professor of American Politics and Public Policy at U.C.L.A., is a co-author of “Identity Crisis: The 2016 Presidential Campaign and the Battle for the Meaning of America.” Follow her on Twitter at @vavreck.

Chris Tausanovitch is an associate professor at U.C.L.A.’s political science department. Follow him on Twitter at @ctausanovitch.