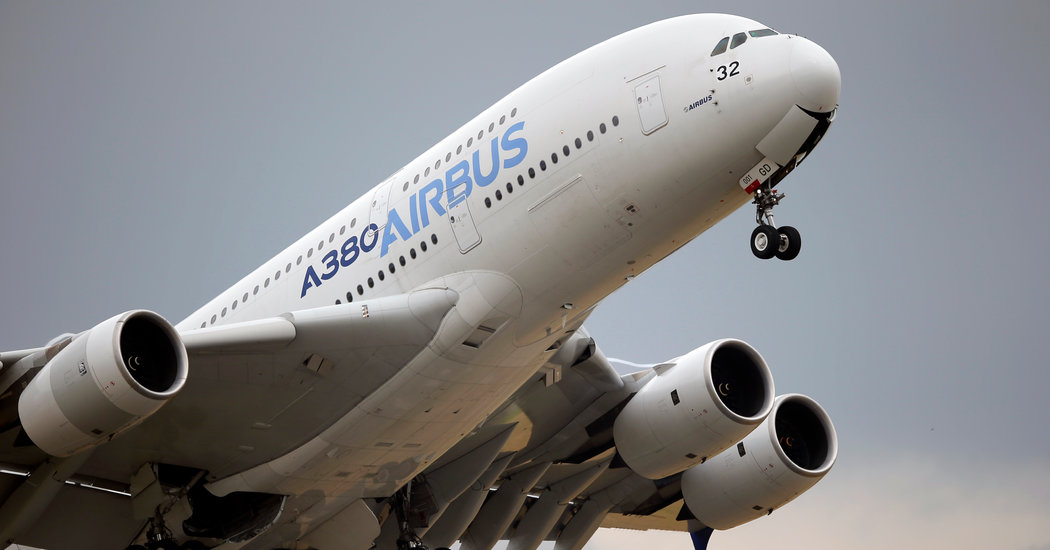 PARIS — Airbus will pay $4 billion in fines to settle a lengthy global corruption investigation, a French court announced Friday, removing a legal cloud over the world’s largest plane maker as it seeks to keep ahead of its rival Boeing after the grounding of Boeing’s 737 Max plane.

The settlement with the authorities in France, Britain and the United States closes four years of investigations into accusations that Airbus, between 2004 and 2016, used intermediaries to bribe public officials in numerous countries to buy its planes and satellites. The episode had tarnished the company’s reputation and forced it to make sweeping changes to top management.

It also allows Airbus to avoid criminal charges that, if proved, could have crippled its business by prohibiting the company from seeking public contracts in Europe and the United States. Airbus will be subject to three years of “light compliance monitoring” in France, the nation’s anticorruption agency said Friday.

“In reaching this agreement today, we are helping Airbus turn the page,” said the French prosecutor, Jean-Francois Bohnert. The company “can now serenely look to its economic future.”

That future is immediately focused on delivering a record number of commercial airplanes on Airbus’s order books, which are filled until 2023. The European aerospace giant broke records last year with over 1,200 new aircraft orders and deliveries.

Boeing is at a serious disadvantage after the crashes of two 737 Max planes, in 2018 and 2019, killed 346 people. Its 737 Max jets have been grounded around the world since then, at a cost of over $18 billion, the company said this week. Boeing has temporarily stopped making the plane, its most popular passenger jet, and lost orders for 87 commercial planes last year.

It would seem like a golden opportunity for Airbus to capitalize. But its huge order backlog is a challenge for Guillaume Faury, Airbus’s chief executive, who will have to determine how much capacity Airbus has to take customers away from Boeing, according to industry analysts.

Airbus and its suppliers have been struggling with production challenges to meet delivery commitments to airlines. That has resulted in a buildup of inventory and a reduced cash flow.

Airbus has also insisted that it is not seeking to capitalize on the grounding of Boeing’s Max fleet.

“After accidents, you never rejoice,” Mr. Faury told the French newspaper Le Monde last summer — a sentiment repeated since then by Airbus executives.

Medium-haul Airbus planes that could be alternatives to the Max were already backed up in production because of strong demand from airlines, he said in the interview. “I don’t know what’s going to happen in the long term,” he added.

Still, the Friday settlement clears the way for Airbus to focus more on improving its already formidable market position against Boeing.

Airbus will pay 2.1 billion euros to France, €984 million to Britain and €526 million to the United States, Mr. Bohnert, the French prosecutor said Friday.

The plane maker was investigated by French and British authorities over bribery accusations on jet sales that date back more than a decade. It also faced an American inquiry over possible violations of export controls.

The case focused on the existence of an opaque system of hundreds of third-party Airbus agents who are accused of bribing officials in 16 countries — including Japan, Russia, China and Nepal — to buy the company’s civilian aircraft and satellites.

The investigation into possible wrongdoing was initiated by Airbus itself in 2016 when the chief executive at the time, Tom Enders, opened an internal inquiry after the company discovered irregularities during an audit of business practices. After confirming evidence of wrongdoing, Airbus reported it to the authorities, a strategy aimed at reducing any potential penalties.

The French authorities said Friday that because of Airbus’s cooperation, the fine was half what it otherwise would have been.

The investigation, conducted by British, French and American judicial authorities, turned into a black eye for Airbus and led to the departure of several top executives, including Mr. Enders at the end of his tenure, as well as an overhaul of management and sales teams.

Mr. Faury took the helm in April with a pledge to ramp up deliveries and cement Airbus’s place as a European industrial champion.