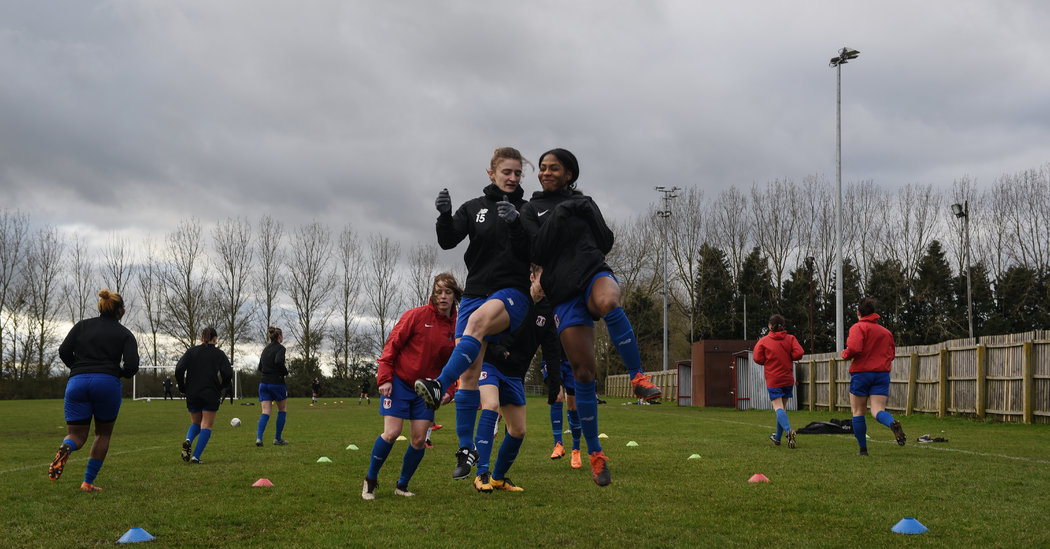 PORTSMOUTH, England — The team bus for the Leyton Orient women’s soccer team can sometimes be stifling. More than a dozen players sit, shoulder-to-shoulder, for hours in tedium under fluorescent blue lights (and in fear of having to use the one bathroom). There is, at least, free tea.

The team’s striker, Otesha Charles, a dual citizen of Guyana and Britain, owns a hair salon in south London and eats Sainsbury’s salmon sandwiches before games. Cheryl Anderson, an accountant and defender from Scotland, is so soft-spoken and nice that it can be stunning to see her dive into a hard slide tackle. The others are teachers, postal workers, lawyers and a London subway driver.

And then there is me, a former collegiate athlete from America who landed in London last January at a moment when every day brought another screaming headline about how Brexit had torn the country apart.

“We had to move forward before the damage caused became irreparable,” one Briton lamented.

On the surface, our team is a snapshot of Britain, containing many of its divisions. There are Leavers and Remainers. There are immigrants from different corners of the world, transplanted Europeans and players from across Britain.

On hourslong bus rides to bleak stadiums, I started to understand this country a little better through the personal stories of my teammates more than I had from any shouting lawmaker or television talking head.

Two players talked about insufficient government funding at state schools where they taught. Another who had endured several knee surgeries emphasized the importance of the National Health Service. And everyone complained about the train delays.

Some of the European players who want to continue living and working in Britain were working to secure their settled status before Brexit takes full effect at the end of this year.

Leyton Orient was just one team, in one city, in a country with deep economic, social and political division. But seeing everything through the prism of Brexit wasn’t how these women lived.

On a particularly wet Sunday in December, we drove a few hours to Portsmouth, a city on England’s south coast that voted overwhelmingly to leave the European Union. It was so cold that the stadium served Bovril — a kind of salty, meaty broth engineered to warm fans during the bleakest weather. The field was a waterlogged pit of mud, beaten into submission by never-ending rain.

One teammate saw my horrified gaze and smiled: “Welcome to English football.”

The fear that Brexit has polarized Britain beyond repair is often discussed by commentators. But activities like sports, music clubs and communal gardens — the “micro-publics” of everyday life — can change how people from different backgrounds or political leanings think and interact with one another.

“Physical proximity in its own right doesn’t yield a huge amount,” said Ash Amin, a geography professor at the University of Cambridge. “But if the shared activity lasts, then the political discussion may follow. And disagreement may not close down the dialogue because of the civility that arises from a shared activity and shared space.”

Our two starting central midfielders are an example. They play together seamlessly, bouncing one-and-two-touch passes off each other, but off the field they’re two very different people.

Fran Ali, a 26-year-old midfielder from east London, works as a planning specialist for Britain’s rail system. She said she voted for Brexit because she wanted Britain to have more control over its future.

“I’m not too into politics, don’t get me wrong,” she said later at a packed pub back in London. “But my main reason voting for leave was so that we could control our laws, our borders and our money.”

Her midfield partner is Egle Trezzi, a 31-year-old photographer from outside Milan who moved to Britain more than a decade ago and teaches at Goldsmiths University in London.

“Personally, I think it’s a stupid idea,” she said of Brexit as we drove home from a game in January, under the kind of sky that suggests the sun will never come out again. “I don’t support it, and whatever happens, it’s going to be bad.”

Fran said she recalled once teasing Egle for “being lefty,” but said they had never gotten into an argument over politics. “I respect her views, and she respects mine.”

In November, when we played in Cheltenham — an area that voted to remain — the general election was just weeks away. Prime Minister Boris Johnson was campaigning on a promise to “get Brexit done,” while the Labour Party and the Liberal Democrats offered another vote on Brexit.

But we didn’t talk about any of that.

The muddy field defined our world that day as we picked one another up out of wet holes, cleared clods of earth from our cleats and laughed at who was the dirtiest. We won the game 1-0 and, for the first time in the team’s history, made it to the second round of the FA Cup, one of the world’s oldest soccer tournaments.

We were promised a celebratory dinner on the ride home, but this was a Sunday in England and almost everything was closed. At a gas station, we bought cheap beers and canned gin and tonics instead.

At a January game against Cambridge City, a university town that overwhelmingly supported staying in the bloc, the locker room was covered in a thin layer of filth. A sign taped to the wall said, “Please do not clean your boots in the showers.” The showers were cold.

There was no trainer with us that day, so the players started getting one another ready for the game: taping ankles, stretching hamstrings, passing around any pain reliever we had.

But she wondered whether soccer on its own was enough to bridge any real divides. “How far do the people that you meet playing football translate into your everyday politics, your everyday actions, your feelings toward other people?”

Some British voters said they favored leaving the bloc so that Britain could have more control over immigration and over who is allowed to live and work in the country.

But that debate revived questions around British identity — including who is British and who is not.

Otesha came to Britain when she was seven years old, and said she remembered feeling like an outsider. The other students at her school “wanted to hear my little Caribbean accent,” she said. “I didn’t feel British. I knew I was Guyanese in England.”

She credits soccer with helping shape her sense of British identity. “Having a big team of 22 girls, I started to feel like this was my community,” she said. “I am a part of England and everything that comes with it.”

Britain’s official departure from the European Union on Friday is mostly symbolic. The transition period is due to last through the end of the year, allowing time for negotiations over trade and other relations.

But maybe once the tie is formally cut, people on both sides of Brexit can reconcile.

“There are people on this team who voted leave and who voted remain, and it had no impact on our team ethos or hanging out outside of football,” said Sophie Le Marchand, a 31-year-old player from Worcester who is a teacher. “It had no impact whatsoever.”