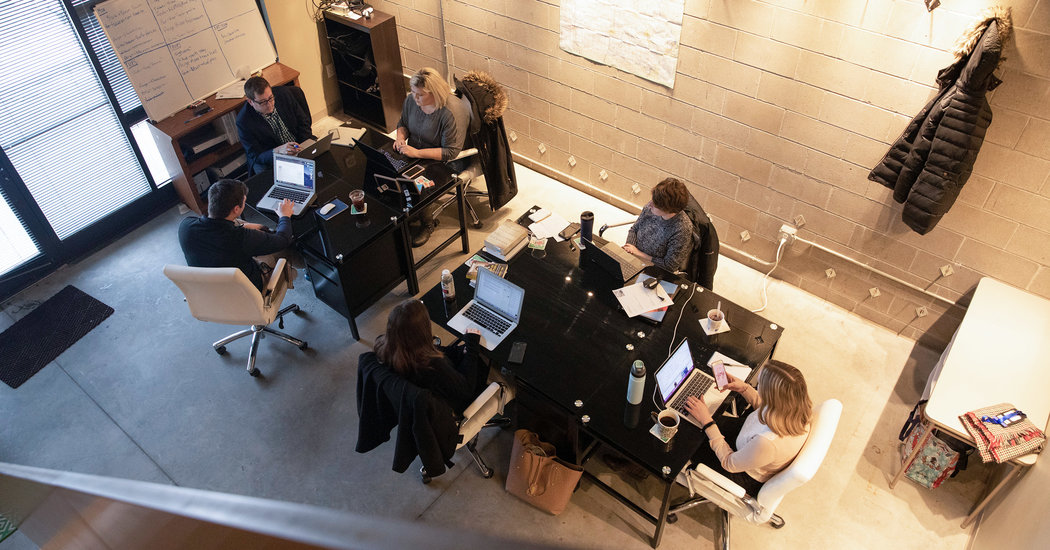 DES MOINES — The best political journalism you’ve never heard of is coming from a scrappy start-up in the East Village.

The East Village of Des Moines, that is.

Iowa Starting Line, a no-frills news outlet that started out as a rookie reporter and his Twitter account, is the new must-read of the 2020 campaign. Elite reporters follow it. Candidates care about it. And at a painful time in the local news business, its six-person staff has started to rival The Des Moines Register for scoops and influence in the first-in-the-nation presidential caucus.

“If I want to know what’s happening on the ground in Iowa, I’m clicking on The Register or Iowa Starting Line, and not necessarily in that order,” said Tim Alberta, Politico’s chief political correspondent.

At a recent debate night in Des Moines, Starting Line’s founder and editor, Pat Rynard, an unassuming Missourian in a blazer and checked shirt, was surrounded by network news reporters seeking the latest political gossip. Dave Weigel, a national writer for The Washington Post, told Mr. Rynard he reads the site to stay current. “It’s so the locals don’t think, ‘This East Coast schmuck doesn’t know anything,’” Mr. Weigel quipped.

Mr. Rynard, 34, is a genial former Democratic operative who left his job in 2015 to try his hand at journalism. Now his team of five reporters — some barely out of college — is bigger than the political staffs at many of the state’s newspapers, which have been badly hurt by layoffs.

Starting Line, which is donor- and ad-supported, opened its first newsroom in June in Des Moines’s hip East Village district. (Before that, Mr. Rynard was a solo act, editing from home with his dachshund, Franklin, at his feet.) The stark décor is, almost accidentally, start-up chic: concrete floors, industrial lighting, a bare-bones podcast room where Jane Sanders, wife of Bernie, was a recent guest.

The rent — $1,250 a month — would barely cover a room share in Manhattan. And in a cost-saving strategy unique to Iowa, some of Starting Line’s furniture is salvaged from candidates who dropped out of the race: a dry-erase board donated by Representative Eric Swalwell (remember him?); a folding table from Senator Kirsten Gillibrand.

On a recent morning, Mr. Rynard spun a pen on his fingers as he gathered his staff. “Traffic has picked up quite nicely,” he said. “All the attention is on Iowa now.” Hundreds of reporters from Washington and New York had descended for the next day’s CNN debate, and Mr. Rynard wanted the site’s reporting to stand out. “What could we be saying that other people aren’t?” he said.

At Starting Line, hyperlocal coverage matters. Mr. Rynard approved a pitch from Libby Meyer — a reporter who joined after leaving her job at The Hawk Eye, a midsize paper in Burlington, Iowa — about precinct captains, who lead the charge for their candidates on caucus night.

When another reporter suggested an event with Senator Michael Bennet, Mr. Rynard shook his head. “Bennet?” he said. “No.” (With so many candidates in the mix, Mr. Rynard has to draw the line somewhere.)

In an interview afterward, Mr. Rynard said he first imagined Starting Line as a left-leaning alternative to Iowa’s conservative political blogs. But in a twist on the usual model for online news, he found that straightforward reporting was more satisfying than partisan clickbait.

“I never wanted this to just be a ‘Democrat rah-rah’ site, because then the only people who read it are Democrats and what are you really accomplishing?” he said over Earl Grey tea at Scenic Route, a cafe popular with political types down the street from his newsroom.

Starting Line’s audience remains small compared with that of The Register, a Gannett paper that covers general news and sports. But Mr. Rynard’s readers are uniquely influential.

“Pat was the first Iowa journalist to tell me that he thought Pete could really gain traction here,” said Lis Smith, a top adviser to Mayor Pete Buttigieg. “He’s been ahead of the curve in predicting who would rise and fall in Iowa.”

Starting Line is no charity: Mr. Rynard said the site was on track to bring in $13,000 in advertising revenue in January, about half of his monthly expenses, which is predominantly payroll. (He also charges for an online newsletter.) To cover costs, he raises money the old-fashioned way: hat in hand.

“‘Help Make Sure Local Journalism Stays Alive’ — that’s my biggest pitch,” he said. “The Iowa press corps has shrunk and shrunk. This trend is not reversing itself for journalism. So either you start to factor in independent news outlets into your charitable giving, or it goes away.”

Mr. Rynard declined to specify his donors, describing them as wealthy individuals and left-leaning advocacy groups. He does not accept donations from political parties, though he has a donation page on the grass-roots Democratic fund-raising site ActBlue. Mr. Rynard said that his donors’ money carries no sway. “No one group has given more than 10 percent” of the budget, he said, “so if I ever need to drop somebody, I can.”

Art Cullen, the publisher of The Storm Lake Times and a dean of the Iowa press corps, said he would prefer more transparency. “It’s something readers need to be aware of, who’s funding these outfits,” he said in an interview.

Mr. Cullen praised Starting Line for filling “the vacuum” left by Iowa publications that he called “shadows of their former selves.” But he worried that political blogs could not replace the public service of a general-interest newspaper. “We’re not paying attention to soil erosion or snow removal,” he said. “That’s basic blocking and tackling, and we’re ignoring it because we’re chasing Andrew Yang around the state.”

Starting Line does cover Mr. Yang, along with state government. It made national headlines after reporting on racist remarks by Representative Steve King and, in 2018, revealing a romantic relationship between a lobbyist and Iowa’s Senate majority leader, who promptly resigned.

Seizing on Iowa’s moment in the national spotlight, Mr. Rynard has looked for ways to punch above his weight. The site’s endorsement tracker is a handy resource for national reporters swooping into the state. He also urges his team to post raw video footage from candidates’ Iowa appearances, a C-SPAN-style service for correspondents who can’t attend in person.

Last weekend, Mr. Rynard was at an event for Senator Elizabeth Warren when she received The Register’s endorsement. Leaving behind the journalists from national outlets, he trained his iPhone on the senator, hoping to catch the moment she learned the news.

His video of Ms. Warren reacting in celebration was shared by thousands on social media, one of the viral hits of the caucus campaign.

There have been growing pains, too. When readership fell after the 2016 caucus, Mr. Rynard resorted to a part-time job to pay bills. Work has kept him away from his second daughter, who was born in October; “paternity leave means I’m at home in the evening,” he said.

After Monday, Starting Line is set to shrink. The site will cover Iowa’s Senate and House races, but four of Mr. Rynard’s reporters were hired only for the caucus. Nikoel Hytrek, who graduated from college last year, said she wasn’t sure what’s next. Paige Godden, a veteran of regional Iowa papers, said she had lined up one gig designing pamphlets for a chamber of commerce.

Ms. Meyer, the reporter who joined Starting Line from The Hawk Eye, is staying on full time. Her previous paper, in eastern Iowa, was bought by GateHouse Media in 2016, and she said the staff of 100 was whittled to about 20. At 26, she is the veteran reporter at Starting Line — not unusual in the ailing world of local news. “That’s how a lot of places are now,” she said.

Mr. Rynard, as he prepared for another day on the trail, grew emotional as he reflected on the difficulties of running a news start-up in 2020. “There’s been a lot of uncertainty,” he said. “I built a business from scratch in the journalism industry, where it’s impossible to do that right now.”

Then his Midwestern politeness quickly kicked in: “I hope that didn’t come off in a bragging way!”