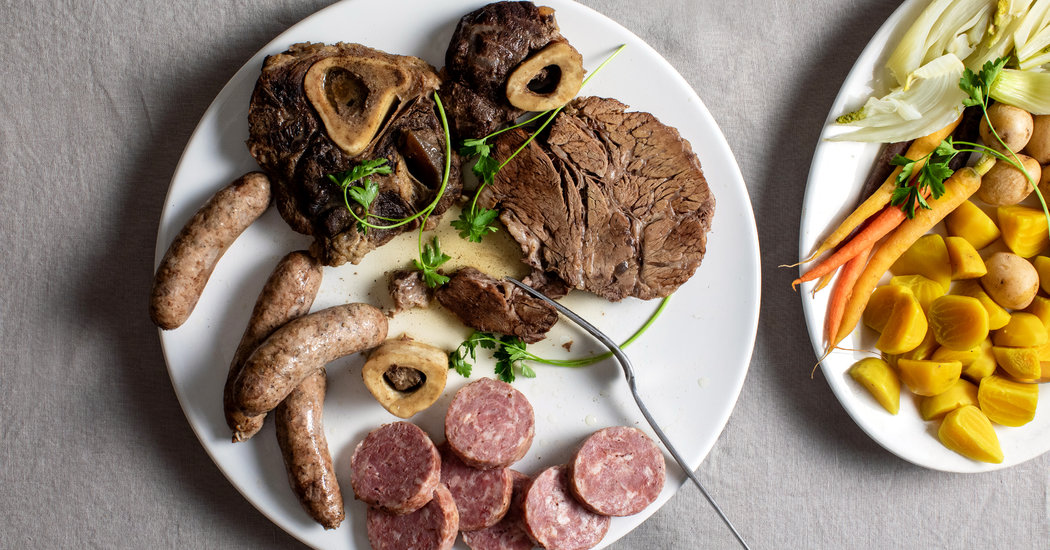 The classic Italian dish bollito misto is no stranger to strong opinions.

Essentially a large pot of boiled meats and vegetables and beloved especially in northern Italy, the dish seems to be fairly straightforward. But every cook makes bollito slightly differently, insisting that his or her method produces the best brodo (the savory broth that is part and parcel of the bollito experience).

I was chatting over coffee with the chef Danielle Glantz, who runs Pastaio via Corta, a pasta shop in Gloucester, Mass. She trained with me when I ran the kitchen at Chez Panisse, and we kept in touch over the years.

She introduced me to her friend Gaia Bonadeo, a food and beverage consultant from Turin, Italy, and an accomplished home cook raised in the tradition of Il Gran Bollito Misto, an enormous feast prepared for holidays and special occasions.

In a charming email, Ms. Bonadeo detailed the process, which really is a head-to-tail rendition. You start with seven kinds of beef cuts, plus veal cheek, tongue, oxtail and a sausage-stuffed pig’s foot or cotechino sausage. Each part is added separately, according to its own cooking time, and, at some point, a stewing hen or capon is usually added to the caldron, too.

It’s served with an all-important sauce called il bagnet vert, which Ms. Bonadeo said was something her family always argues about. “A huge amount of parsley” is a given, she said, but no one agrees about how many capers or anchovies are necessary. Her version includes bread soaked in vinegar, a couple of chopped eggs and only a tiny amount of garlic. “I tend to use Aglio di Vessalico, which has an amazing perfume and soft taste,” she said. “At the end mix it all together with a ton of oil — Ligurian oil!”

To attend such a feast would be mind-bogglingly sensational. No work involved, just gluttony. If you don’t have the desire or wherewithal to cook it yourself, an annual Piemontese bollito festival in Carrù begins at 6 a.m. and goes all day. There are also plenty of bollito restaurants in Northern Italy, where all the meats are served from carts with seven traditional sauces.

There is no getting around the fact that making your own bollito requires a firm commitment. My version is simpler, but it is a project, and easier to deal with if the work is spread over two or three days. Still, it is a worthy adventure. I used chuck and beef shank, along with cotechino and Italian fennel sausages, and served a large platter of boiled vegetables, a green sauce and a spicy red sauce alongside.

For this menu, I also served the brodo in little cups for sipping, though some serve the broth as first-course soup garnished with small stuffed pasta shapes. Either way, it’s so important to get the brodo right, which requires very gentle simmering, straining, refrigerating, de-fatting and reducing to concentrate the lovely flavor.

To begin the meal, we had a refreshing Belgian endive salad with medium-cooked eggs and lemony anchovy vinaigrette. (For this reason, my salsa verde contained neither eggs nor anchovies.) Then came the resplendent, if downsized, bollito, plenty for six to eight hungry people. For dessert, I made a favorite frangipane crostata with pears, cut in smallish portions.

Honestly? It was a grand meal, but I also would have been happy with only bollito misto, a crusty loaf of bread and a bottle of wine.