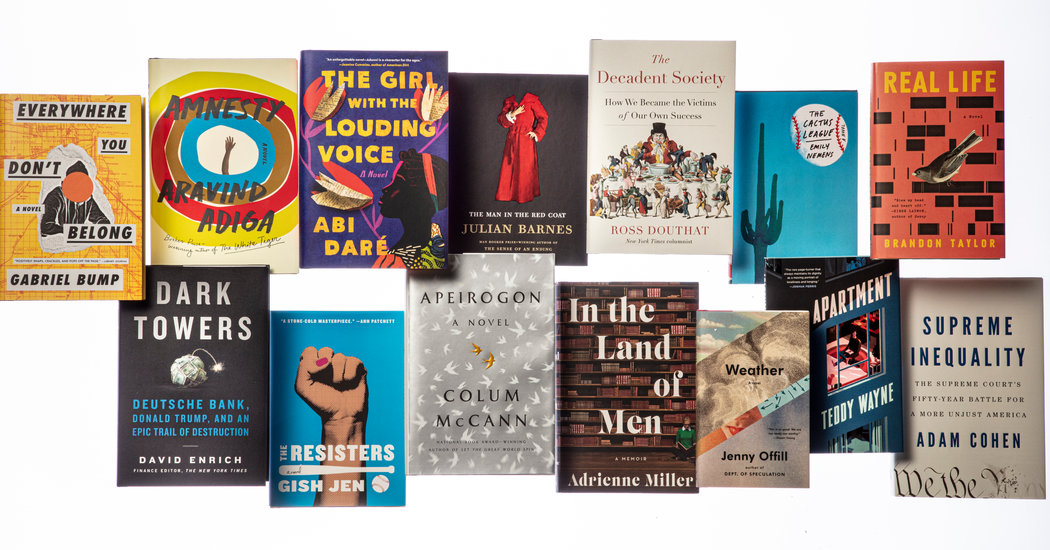 Ever since his refugee application was denied, Danny, who came to Australia from Sri Lanka, has tried to stay under the radar. But when he hears about a murder — and realizes he may hold a key to the case — he must weigh the risks of exposing his undocumented status to the authorities. Adiga, the author of the Booker Prize-winning novel “The White Tiger,” brings to life the precarious circumstances and impossible choices that immigrants face in his new book.

It’s 1996, and Wayne’s achingly lonely narrator is enrolled in Columbia’s M.F.A. program, where he finds solace in an unexpectedly intense friendship with a fellow student, Billy. When he offers Billy the chance to live rent-free in his apartment, the relationship becomes a crucible, driven by questions about power, class and masculinity.

Two fathers, one from Israel and one from Palestine, are linked by their shared grief: Rami’s teenage daughter was killed by a suicide bomber, and Bassam’s 10-year-old daughter was fatally shot by the police after leaving a candy store. McCann, who won the National Book Award for his 2009 novel, “Let the Great World Spin,” draws on the men’s real-life stories for this novel, which follows their friendship and shared efforts to bring about peace.

This debut novel by the editor of The Paris Review follows a baseball team, the Los Angeles Lions, and the grand unraveling of its star outfielder, Jason Goodyear. Set during spring training in the Arizona desert, it features a quirky cast — Goodyear’s ex-wife, a sportswriter hoping for a juicy story, the team’s groupies and even the stadium’s organist.

Enrich, the finance editor for The New York Times, traces Deutsche Bank’s 150-year history, from its origins as an advocate for German commerce to its less savory headlines: deals with rogue states, money-laundering scandals and its relationships with the Kushner family and President Trump, among other developments.

The Decadent Society: How We Became the Victims of Our Own Success, by Ross Douthat (Avid Reader, Feb. 25)

The Times’s Op-Ed columnist explores what he sees as a stagnating culture in the United States, and examines the technological, economic and even biological forces that he believes are to blame.

This debut novel tells the story of Claude, a young black man born on the South Side of Chicago and raised by his grandmother. As tensions between the police and his neighborhood intensify, he avoids getting involved, hoping that once he leaves the city for college he can carve out a new identity.

The Girl With the Louding Voice, by Abi Daré (Dutton, Feb. 4)

Growing up in Nigeria, Adunni — the teenage heroine of Daré’s debut novel — strives for an education, but her plans are overturned after her father sells her to an older man. She eventually escapes the marriage and heads to Lagos, where she works for a wealthy family and encounters yet more punishing setbacks. Despite what she endures, this is a courageous story of a woman asserting her own voice.

Miller sets out to detail the misogynistic, old-boy culture of print magazines in the 1990s as she charts her path from a young editorial assistant at GQ to the first female literary editor at Esquire. Her dealings with the writer David Foster Wallace — both professional and personal — occupy a large part of the book.

Belle epoque Paris comes alive in this biography of a pioneering French doctor, Samuel Jean Pozzi, who was the subject of one of John Singer Sargent’s most famous paintings. Barnes, the author of “The Sense of an Ending” and other beloved books, sketches his subject’s life in fascinating detail, including entanglements with Henry James, Oscar Wilde and Sarah Bernhardt.

In Taylor’s debut novel, Wallace — a shy African-American student at a Midwestern college — feels out of place and keeps to himself. But several confrontations dismantle his defenses and unnerve him, forcing him to reckon with his desires.

In her latest novel, Jen imagines a future surveillance state called AutoAmerica, where you’re either a Netter, with a nice home, an income and other luxuries, or a Surplus. Gwen, who comes from a Surplus family, is an incredible baseball talent. When word of her skill gets out, she must decide whether to leave her caste and way of life behind.

After the election of President Richard Nixon and the retirement of Chief Justice Earl Warren, who oversaw a number of significant civil rights cases, the Supreme Court was destined for radical change, the ramifications of which would be felt for decades. Cohen, a former member of The Times’s editorial board, argues that, starting under Nixon’s tenure, the court has consistently arrived at decisions that have made the country less fair.

It’s been six years since Offill’s award-winning novel, “Dept. of Speculation,” and she returns with a story written in a similarly fragmented style. Lizzie is trying to balance her own dread about impending disaster — environmental, political, cultural — while answering mail for the host of a hot-button podcast.