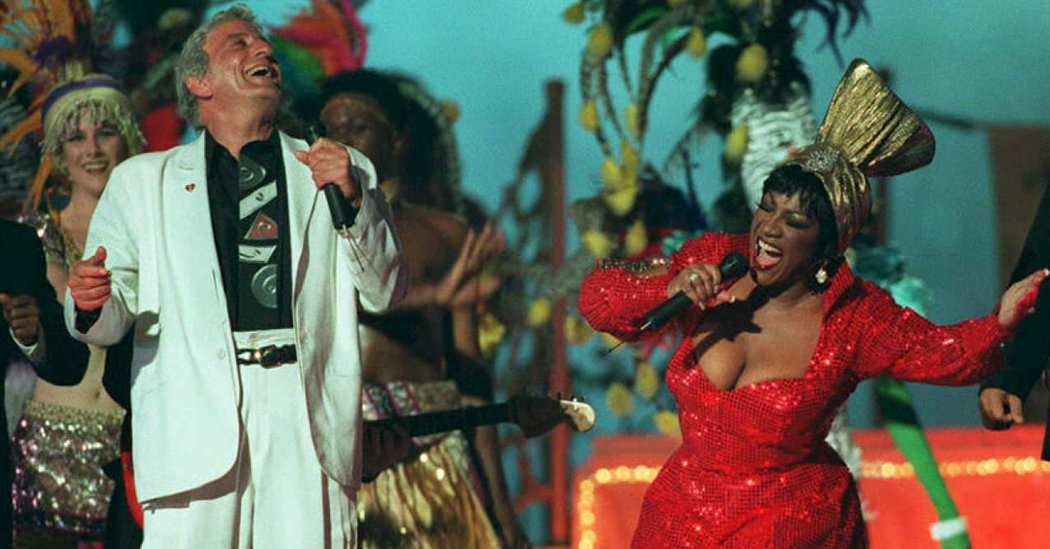 MIAMI — Dale Girard was wearing long underwear covered in what he said looked like “ectoplasmic slime from ‘Ghostbusters’” but was actually freezing cold fire gel. Costumed as “The Executioner,” he was in a holding area underneath a massive metal stage as it was being rolled onto the field at what was then known as Joe Robbie Stadium.

There was one thing on his mind, he recalled this week: “I’m about to be set on fire, and I’m three feet from Patti LaBelle.”

This Sunday, about 100 million people in the United States will watch as the pop stars Jennifer Lopez and Shakira perform during halftime of the Super Bowl. They were recruited in part by Jay-Z and his company, Roc Nation, which signed a deal with the N.F.L. last year to become the league’s “live music entertainment strategist.”

For the N.F.L., far more important than the quality of the show is the absence of controversy. Last year several artists, including Rihanna, reportedly declined to perform during the Super Bowl halftime out of concern for Colin Kaepernick, the quarterback who has not played in the N.F.L. since the 2016 season, when he knelt during the national anthem to protest racism and police brutality. Once the league landed its performers, Maroon 5 and Travis Scott, it opted to cancel the traditional news conference ahead of the show, pre-empting questions about the decision.

That changed along with the N.F.L. itself, as the league’s airtime ballooned in value and made the Super Bowl show one of the most coveted gigs in entertainment. The marching bands of early shows gave way to Up With People — an educational organization — and eventually to theatrical spectacles and concerts from megastars.

Perhaps the most bizarre halftime show in Super Bowl history happened 25 years ago, here in South Florida, the fifth and last time the San Francisco 49ers won the Lombardi Trophy.

“Bring to me, the trophy,” boomed a musclebound king, wearing a crown of snakes and clutching a skull-topped scepter. Just minutes before, Steve Young and the 49ers had jogged off the field, up by 28-10 and on their way to a 49-26 blowout against the Chargers. But in seconds the stadium was transformed into a giant temple, replete with torches, snakehead drummers and men on stilts.

Over a frenetic 11 minutes, the odd show played out. A costumed temple worker brought the N.F.L.’s Lombardi Trophy to the king, and LaBelle, dressed as a temple goddess, belted out the opening lines to “Release Yourself.” But alas, this gang’s ambitions of stealing the trophy would be foiled by Indiana Jones and his sidekick, Marion Ravenwood, who both sky-dived onto the field.

They battled the temple guards — including Girard’s “Executioner,” who was set on fire with a torch — were threatened with snakes, and ultimately made their way into Club Disney, where Tony Bennett, the jazz trumpeter Arturo Sandoval and the Miami Sound Machine performed.

After Marion and Indiana recaptured the trophy, they held it aloft as LaBelle, Bennett and the supporting cast of dozens for some reason broke into a rendition of “Can You Feel the Love Tonight?” — an Elton John song from the movie “The Lion King.”

A quarter-century later, it makes even less sense.

The show was the brainchild of a Disney marketing executive. One month after the Super Bowl, Disneyland would open a ride called The Indiana Jones Adventure: Temple of the Forbidden Eye. And as part of an estimated $20 million marketing budget for a ride that required years of construction and reorienting Disneyland, why not put it front and center on television’s biggest stage?

A few months before the Super Bowl, a stuntman named Bryan Friday was performing at the Six Flags amusement park in Dallas. He heard there were auditions for a new Indiana Jones stunt show at Disney World in Orlando so he piled into a car with four friends for the long drive to Florida.

The audition went well, he said in an interview last week, but he was told that he was too tall for the permanent role of Indiana Jones at the park. But did he want to come back the next day, when Disney was holding auditions for a Super Bowl show?

And that is how Friday came to perform as an iconic movie character in front of tens of millions of people. Not that he was paid handsomely. “I want to say it was $3,000, and that was for three weeks,” he said. “But you figure, 1995? It was definitely worth doing.”

He also didn’t get to watch the Super Bowl. The cast members thought they might get to see the second half, but they were shepherded onto buses and driven out of the stadium. “They took us to Don Shula’s restaurant,” Friday said, referring to the longtime Miami Dolphins coach, “and we ate and drank there and had a really nice party at their expense.”

There was an unexpected perk, however. “I met Patti, and she was actually kind of flirty with me,” Friday said.

“I probably was, if he was cute,” LaBelle said in a telephone interview.

Though the television viewers probably didn’t notice, there were a handful of minor problems with the show. In a full dress rehearsal the day before, the flares worn by sky divers singed the field. The N.F.L. forbade the performers to wear them during the actual halftime, so that part of the broadcast came from video shot during the rehearsal.

The metal stage also had numerous holes, to make it lighter and improve traction, which LaBelle says wreaked havoc on her high-heeled strutting.

And, of course, the snakes. Indiana Jones is famously afraid of snakes, so what would an Indiana Jones show be without them? Two purple-turbaned snake charmers performed in the show with 12-foot reptiles — Storm and Slither. There was only one problem.

“They scared the absolute bejeebers out of Patti,” said Ron Magill, the longtime communications director of the Miami-Dade Zoological Park and Gardens who is a South Florida celebrity. Magill was one of the snake charmers. “It was Patti LaBelle and Tony Bennett, and Patti just screeched, ‘Oh no, child. Oh no, child.’”

“I am petrified of snakes,” LaBelle said, remembering her response: “You all gotta do something different right now. You gotta move those snakes.”

In many ways, the halftime show has become simpler. “It was like a Broadway play back in the day,” LaBelle said. “Today you go out there, you have your three- or four-song set, you do it and you go home.”

But the current versions are far more lavish than the shows at the first 20 or so Super Bowls. Michael Eisner, Disney’s chief executive from 1984 to 2005, pegged the evolution to the spectacular opening ceremony of the 1984 Summer Olympics in Los Angeles.

“John Williams created what is now the music that introduces everything in the Olympics,” he said. “That was really a monumental moment.”

As the 1995 show and several subsequent Super Bowl halftimes have proven, those moments are not easily manufactured, no matter how many snakes are involved.