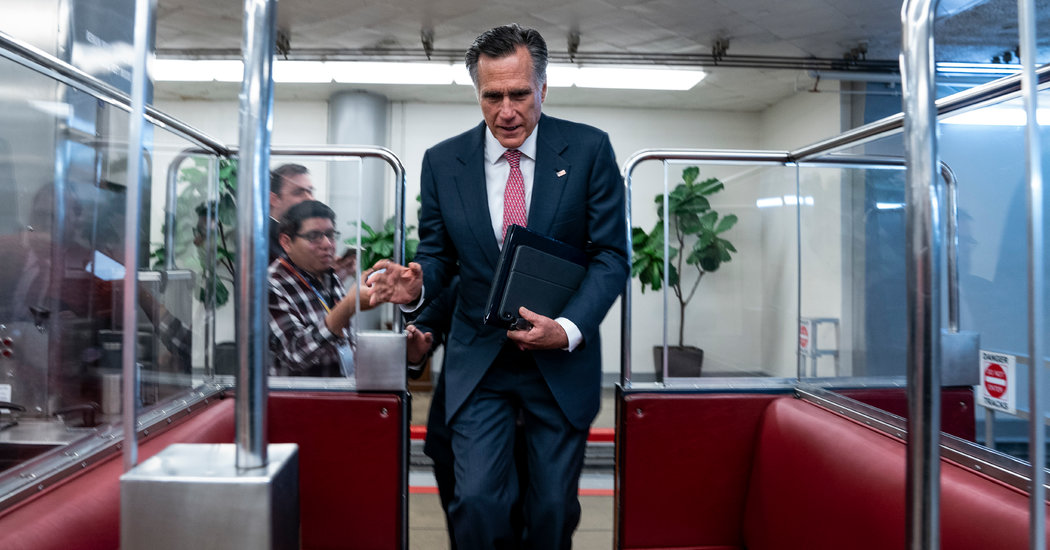 WASHINGTON — It’s been one of those spectacle weeks on Capitol Hill, the likes of which history might just stop to recognize, even if Trump-era Washington pauses for nothing.

There were big crowds, special rules in place, Alan M. Dershowitz mugging for photographs and Triumph, the canine puppet known for his ambush mockery of celebrities, trying to score an interview with Senator Mitt Romney, to no avail.

You could always recognize Mr. Romney, Republican of Utah, racing around the Capitol. He drew big press scrums and wore a bemused grin — a face to indicate that he had seen some things in a career that has taken some unforeseen turns, particularly now.

All of which places upon Mr. Romney a level of curiosity that goes beyond the quasi-celebrity treatment he already receives as the last pre-Trump standard-bearer of a Republican Party that feels about 80 years removed from the party that nominated him eight years ago.

As Mr. Romney was beating a brisk retreat from the Senate floor during a break in the trial on Wednesday afternoon, a small pack of reporters yelled after him like kids chasing an ice cream truck. He ended up in his hideaway office tucked into the entrails of the Capitol.

“Yes, it is a little unusual,” Mr. Romney said in an interview, referring to the trial — specifically, to something “unusual” that had happened at the trial just before a break.

He was sitting at his desk in the back left corner of the Senate chamber. He looked attentive, jotted down notes and managed to refrain from sipping the contraband chocolate milk he was busted for drinking out of a bottle during the Tuesday proceeding.

Then, suddenly, the House impeachment managers started dropping Mr. Romney’s name into their testimony. The House’s lead prosecutor, Representative Adam B. Schiff, Democrat of California, posed a theoretical circumstance in which President Barack Obama was discovered to be hitting up his Russian counterpart for dirt on his 2012 opponent, Mr. Romney, in exchange for military aid. Then two Republican senators, Lindsey Graham of South Carolina and Ted Cruz of Texas, shot back with a question for Mr. Schiff about whether Mr. Obama would have the authority to ask for an investigation of Mr. Romney’s son if he was being paid a million dollar by some shady Russian company.

At which point Mr. Romney raised his hands and flashed something between a smile and a grimace in the direction of Chief Justice John G. Roberts Jr., the presiding judge who had just read out the questions containing these imagined Romney scenarios. It was an expression to indicate this was not exactly a normal circumstance for any juror to find himself in, let alone a juror who ran twice for the job that the current impeached occupant of the White House (who had recently called said juror “a pompous ass”) now holds.

Mr. Romney has also become a magnet for nostalgia lately — at least among Democrats. “He is a decent, honorable man,” former Vice President Joseph R. Biden Jr. said in a recent interview of Mr. Romney. Mr. Biden conceded that it was unlikely that he would be running for president right now if it were Mr. Romney seeking re-election, not Mr. Trump.

“I think this is Senator Romney’s moment to shine,” said Senator Amy Klobuchar, another Democratic presidential candidate who was in Washington for the impeachment trial. She was referring specifically to Mr. Romney’s support for calling witnesses.

“Hopefully he can bring some people with him,” Ms. Klobuchar said. She meant Republicans, a prospect that was looking more and more unlikely. By most indications, Mr. Romney’s ability to recruit Republican colleagues to his position has been minimal at best.

“I know there are some who feel if we open the door, we’d have tons of witnesses and court battles,” Mr. Romney said. He said he would propose an arrangement in which each side would get to call one or two witnesses, and then have 30 days to produce them — regardless of what procedural or legal roadblocks were placed before them.

Mr. Romney is also an oddity among Senate Republicans in that he has not withheld his low opinion of Mr. Trump. “He has made a career of trashing people by tweet,” Mr. Romney said in response to a question about what he thought of an outburst from the president on Wednesday morning about John R. Bolton, Mr. Trump’s former national security adviser, whose unpublished manuscript contains an account that contradicts Mr. Trump’s impeachment defense. “It is part of his shtick and it’s working for him,” he said of the Twitter attack. “I think it’s unfortunate.”

By the same token, Mr. Trump has not been shy about heaping scorn upon Mr. Romney. It has created a situation in which some of Mr. Romney’s colleagues have taken their own shots at him, no doubt as a way to prove allegiance to their audience of one in the White House.

Senator David Perdue, Republican of Georgia, likened Mr. Romney to “Jeff Flake on steroids,” referring to the former Arizona Republican and frequent critic of Mr. Trump who retired last year from the Senate. Senator Kelly Loeffler, Republican of Georgia, who was recently appointed to the Senate by that state’s governor — over the objections of the White House — tried to score easy points with Mr. Trump by ambushing Mr. Romney (roughly the Senate equivalent of the new inmate picking a fight with the biggest dude on the cellblock).

“My colleague @SenatorRomney wants to appease the left by calling witnesses who will slander the @realDonaldTrump during their 15 minutes of fame” tweeted Ms. Loeffler, who along with her husband had been a major donor to Mr. Romney.

It is not just Senate Republicans who have gone against Mr. Romney, who has become a heat rod inside Mr. Trump’s party.

He gets yelled at in grocery stores, among other places. “I was on an airplane a few months ago and someone seated across the aisle began heckling me,” Mr. Romney recalled. It involved a “social issue” he said, and a flight attendant had to come over. “And they were moved to a different seat, so that I wouldn’t be bothered.”

Stuart Stevens, the chief strategist on Mr. Romney’s 2012 presidential campaign, shrugs off the vitriol. “I hope it makes them feel better because I can tell you that Mitt Romney does not care,” Mr. Stevens said. “He is an incredibly secure individual. He does not have this residual anger towards the world like Trump does.”

It helps, Mr. Stevens added, that Mr. Romney has suffered much worse politically. “As Mitt once said in some context, ‘The worst thing that could happen to anyone in politics has already happened to me. I lost the presidency.’ It’s like the guys in Vietnam said, ‘What are you going to do, send me to Vietnam?’”

There was a time, after Mr. Obama defeated him in 2012, that Mr. Romney expected to live out his public days in quasi exile. That had been the precedent for party nominees who lose general elections. “Mike Dukakis can’t get a job mowing lawns,” Mr. Romney said in “Mitt,” the 2014 Netflix documentary about his two presidential campaigns.

Photographs of a solemn Mitt Romney pumping his own gas started popping up online. #SelfiesWithMitt became a thing. (“Airports are the worst,” he said.) He fought Evander Holyfield in a charity boxing match. People stopped him and said he looked familiar. “You’re John Kerry, you’re John Kerry,” said one woman who accosted him in Arkansas. Mr. Romney told people he was Tom Brady.

As the end of the week neared and potentially gettable votes in favor of calling witnesses kept falling away, the impeachment trial’s denouement began to resemble more of a fait accompli. It seemed likely by Thursday that there would be no witnesses called — only a fast vote that would result in an almost certain acquittal of Mr. Trump.

Before leaving the sanctuary of his hideaway and heading back to the trial, Mr. Romney grew solemn. “I think of this as an inflection point, politically in our country,” Mr. Romney said. “It’s a constitutional issue. I feel a sense of deep responsibility to abide by the Constitution, to determine — absent the pulls from the right and the pulls from the left — what is the right thing to do?”

It would be after midnight when Mr. Romney got home, where he likes to unwind after a long day with television before bed. (He much prefers “Comedians in Cars Getting Coffee,” the Netflix interview show starring Jerry Seinfeld, to anything on cable news.) The Super Bowl would be played on Sunday, without Mr. Brady. The Iowa caucuses would be held on Monday without Mr. Romney.

Whatever, Mr. Romney said he was not one for dwelling or looking back. “You go back to my campaigns,” he said. “I sort of watch how the president reacts to his opponents, and it’s not the way I did it. But you know what? He won and I didn’t. On the other hand, he won and I didn’t but I would not have done what he’s done in order to win.”

It is not clear what exactly Mr. Romney is referring to here, nor does he elaborate except to repeat the last part: “I would not have done some of the things he did.”