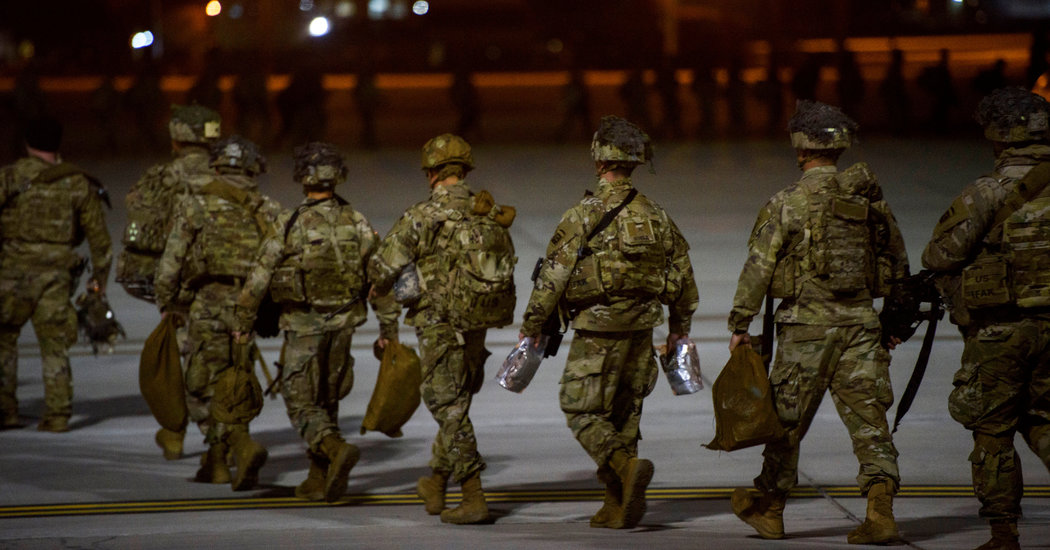 WASHINGTON — The House on Thursday moved to block President Trump from taking military action against Iran without the approval of Congress, voting to repeal a 2002 war authorization and to bar him from using federal funds to mount an unauthorized strike against Tehran.

The bipartisan votes reflected a Congress that has grown weary of military conflict and skeptical of the president’s expansive war-making power after years of intractable hostilities in which thousands of American troops have died. It amounted to another attempt by the Democratic-led House to place a constitutional check on Mr. Trump, as the Senate was on the brink of deciding whether to convict him of impeachable offenses and remove him from office.

The measures, opposed by the vast majority of Republicans, were all but certain to die in the Republican-controlled Senate.

But in voting to repeal the 2002 law, the House was moving to reclaim congressional war powers by revoking a mesaure that three successive presidents have used to justify all manner of strikes without securing prior approval from the legislative branch.

The law “allows war without end — this country can’t tolerate that,” said Representative Barbara Lee, Democrat of California, a leading antiwar voice in her party who sponsored Thursday’s measure repealing it. “Congress has a responsibility to do their job and follow the Constitution and debate and vote on the use of the force in matters of war and peace.”

Congress passed the resolution in 2002 to authorize the use of military force in Iraq against Saddam Hussein’s regime, which President George W. Bush said at the time possessed weapons of mass destruction. But it has been invoked by his successors for a variety of reasons — President Barack Obama used it in 2014 as the legal justification for airstrikes in Syria against the Islamic State — leading Democrats and some Republicans to argue that it now serves only to provide presidents cover to circumvent Congress and order unauthorized strikes.

Robert C. O’Brien, Mr. Trump’s national security adviser, initially said an American strike this month that killed Maj. Gen. Qassim Suleimani, the most important general in Iran, was justified by the 2002 law, though the administration has since said the strike was a matter of self-defense under international law and pursuant to the president’s constitutional powers as commander in chief.

As escalating tensions with Iran brought the two countries to the brink of war, House Democrats pledged to impose another check on Mr. Trump’s war powers in an effort to prevent a future dash toward military action.

“The need to hold this president in check has never been higher,” said Representative Ro Khanna, Democrat of California, and the sponsor of the measure to block funding for a military strike on Iran unless authorized by Congress. “The worst thing we could do is let this president off the hook.”

Mr. Trump campaigned promising to disentangle the United States from endless wars. He has moved on a variety of fronts to scale back the country’s military presence in hot spots around the globe, pulling troops out of Afghanistan, northern Syria and South Korea.

But like other presidents before him, Mr. Trump is unwilling to have his war powers constrained by Congress. The administration has threatened to veto both of the measures the House passed on Thursday, arguing they would hinder the president’s ability to defend the country and its interests.

In the White House’s statement warning that Mr. Trump would veto the repeal of the 2002 authorization, administration officials contended that the resolution “has long been understood to authorize the use of force for” addressing threats emanating from Iraq, “as well as threats directed by Iran,” language that Democrats cited as a dangerous reading of the law that underscored the urgency of getting rid of it.

The House passed both measures as part of its version of the annual defense policy bill in July, but they were cut out of the final package after lawmakers had to negotiate with Republicans to reconcile the package with a far less confrontational version passed in the Senate.

During the negotiation process, the White House, intent on creating the Space Force as the sixth branch of military and maintaining the ability to divert military construction funds to pay for the border wall, had initially been open to considering a repeal of the 2002 authorization of military force, according to three people familiar with the negotiations who requested anonymity to discuss private discussions. But the Pentagon intervened, and the repeal was taken off the table, the people said.

Mr. Trump at first appeared to give Republicans permission to support the measure on Wednesday morning, writing on Twitter with the message that, “I want everyone, Republican and Democrat, to vote their HEART!”

But by the evening, he reversed his stance, tweeting that the repeal was an attempt by Speaker Nancy Pelosi to “take away authority Presidents use to stand up to other countries and defend AMERICANS.”

“Stand with your Commander in Chiefs!” the president added.

Republican lawmakers on Friday adopted a similar argument, contending that both amendments would shackle Mr. Trump’s presidential prerogatives as commander in chief and endanger the nation’s security.

Representative Michael McCaul of Texas, the top Republican on the Foreign Affairs Committee, said he would “prefer a new and updated” authorization, but described repealing the current one without a replacement as irresponsible.

To do so, Mr. McCaul said, “endangers not only the United States’ national security but our coalition partners, most notably Iraq.”

But more libertarian-minded groups and lawmakers backed the measures. Both FreedomWorks, a conservative advocacy group, and Americans for Prosperity, the right-wing advocacy group founded by the Koch brothers, announced that votes against the amendment repealing the 2002 authorization would negatively impact the ratings they assign lawmakers.

“As commander in chief, the president can and should always project U.S. force to protect American lives and sovereignty,” Representative Andy Biggs, Republican of Arizona and the chairman of the House Freedom Caucus, wrote in an op-ed ahead of the vote.

“But Congress also must play its own war-powers role,” he added, by passing a new authorization “that reflects clear, limited priorities in the Middle East, not more endless war.”