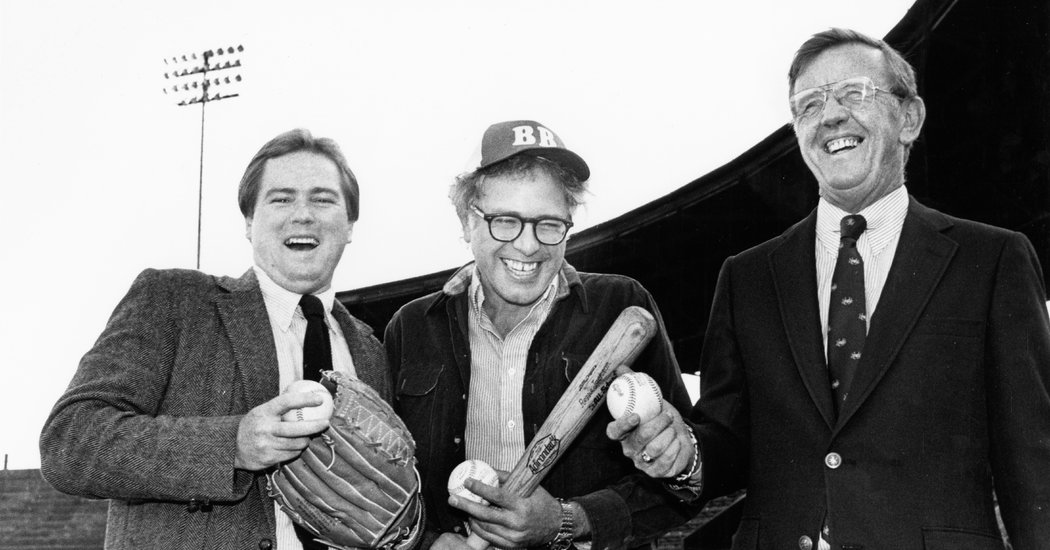 BURLINGTON, Iowa — The role was not an artistic stretch.

“My name is Rabbi Manny Shevitz,” Bernie Sanders began, acting in a little-seen 1999 comedy called “My X-Girlfriend’s Wedding Reception.” “And I am very pleased that you invited me.”

The scene, filmed in Mr. Sanders’s adoptive home state of Vermont by a family friend, called on the character to offer Talmudic wisdom to newlyweds. But Rabbi Shevitz was preoccupied.

“I remember when I used to walk down my old neighborhood in Brooklyn,” he said. “That was before the Dodgers went to Los Angeles, which was the worst thing — the worst thing that ever happened.”

He went on, griping about owners and “that free agency crap,” until his aggrieved Brooklyn baritone exhausted itself.

“I remember doing the part,” Mr. Sanders said dryly in a recent interview.

It is unlikely that he required much rehearsal.

For well over a half-century, Mr. Sanders has remained fixated on one of the most profound heartbreaks of his childhood: his beloved Dodgers decamping for parts west after the 1957 baseball season, when the presidential candidate was 16.

His is an old wound but one with fresh resonance in a presidential campaign fixated on the ravages of unfettered capitalism. News reports in October said that Major League Baseball — the corporate behemoth of his youth — was seeking to change the minor league system and might sever ties with 42 teams. Mr. Sanders became one of the most vocal opponents of this plan, drawing attention to the plight of teams like the Missoula PaddleHeads and the Batavia Muckdogs while also making his broader pitch.

On Wednesday, Major League Baseball seemed to have had enough of the opposition to the proposal, releasing a letter warning the minor league organization that the “misinformation tactics you have employed” would backfire.

In a statement on Thursday, Mr. Sanders tersely reminded the league of the “gigantic tax breaks” that teams have received.

Much has contributed to Mr. Sanders’s progressive worldview and disdain for corporatism in the decades since the Dodgers moved from Brooklyn. There was his mother’s illness and his family’s struggle to pay her medical bills, his travel abroad, his status as a lonely voice for democratic socialism in Washington.

But perhaps no single event has proved more enduring in Mr. Sanders’s consciousness — more viscerally felt in his signature fury toward the one percent — than the day he was told his neighborhood heroes belonged to someone else.

So in recent months, when minor league baseball needed a powerful ally, Mr. Sanders saw himself as a natural fit. He has met with the league’s commissioner, Rob Manfred. He has sent him a strongly worded letter. In December, he held a made-for-TV event with former minor league players and team leaders in Burlington, Iowa, a town on the Mississippi River whose team, the Burlington Bees, is among those on the chopping block.

Such anger, of course, is not without strategy. His campaign views the crusade as a political winner — at once wholly in keeping with his us-against-them defenses of the little guy and aimed squarely at the kinds of lunch-pail cities and towns that Mr. Sanders sees as the core of his voting coalition. Aides consider the issue a rare opportunity to appeal to Republicans: Neither party has a monopoly on America’s pastime.

Be prepared for Iowa caucus night. Subscribe to “On Politics,” and we’ll send you a link to our live coverage.

“This has nothing to do with what’s good for baseball,” read a recent Sanders campaign Facebook ad targeted at Iowans, who stand to lose three teams under the plan, “and everything to do with greed.”

Like most of Mr. Sanders’s stances, this one has been long in the coming. Among his concerns, he said, is the potential distress awaiting young residents if their local teams are taken away. “I worry about it very much,” he said in the interview.

Mr. Sanders generally does not speak much about his past, frustrating some aides and supporters who wish he more consistently connected his wide-ranging critique of the American economic order to his own biography.

The Dodgers have been an exception.

“I don’t want to tell you that was the sole reason that I’ve developed the politics that I’ve developed,” he said in the interview. “But as a kid, I did see in that case about the greed of one particular company. And that impacted me.”

Even in a city with a long history of firm attachments to its star athletes, the bond between Brooklyn and its Dodgers was something different. The team was not New York’s but the borough’s — a font of pride and identity as central to neighborhood operations as the subways Mr. Sanders and his friends would ride to Ebbets Field, settling into 60-cent bleacher seats some 30 minutes from home.

They came to understand that the local ice cream man, surrounded by curious crowds on summer evenings around 7 p.m., was also a bookie taking bets on the Dodgers and New York Giants.

“The kids were really the cover,” said Steve Slavin, a friend who has known Mr. Sanders since their teens. “We didn’t know. We were just very happy that he came around.”

Mr. Sanders’s memories were more wholesome. There was the Dodgers shirt that arrived in the mail one day when he was home sick from school — “a very meaningful present for me,” he said quietly — and the time, at age 6, when Mr. Sanders grew so animated after a Dodgers victory that he banged into a closet door, making a dent.

In the interview, he spoke of the villainous Yankees (“with all their money and all their, you know”) and ticked off a full starting lineup when prompted: “Gil Hodges played first. Junior Gilliam played second. Pee Wee Reese played shortstop. Billy Cox played third base. Carl Furillo played right field. Duke Snider played center field. They had a number of left fielders — Gene Hermanski was one. Roy Campanella caught.”

Mr. Sanders held for a beat, pleased with himself: “How’s that?”

The joy would fade. Two years after the team’s signal triumph, defeating the Yankees in the 1955 World Series, the Dodgers were gone, airlifted to Los Angeles by an owner, Walter O’Malley, whose very mention can still prove triggering for a veteran Brooklynite.

Mr. Sanders invoked an old joke about the three men most loathed in the borough at the time: Stalin, Hitler and Mr. O’Malley — “not necessarily in that order.”

The senator does not remember how he found out about the team’s departure. But he remembers what he learned. “You don’t understand as a kid that this is a privately owned company whose goal is to make money, and if things don’t go well, you move to another community,” he said. “I didn’t know that as a kid. And that was — it was inconceivable. It was really inconceivable.”

Mr. Sanders left Brooklyn shortly after the Dodgers did, studying at the University of Chicago before eventually settling in Vermont.

When he was Burlington’s mayor in the 1980s, he and the local business establishment hoped to foster a sense of community by attracting a minor league team to the city.

It worked, he said. Parents brought their children to games. Everybody had a good seat, in a setting more intimate than a big-league park. Mr. Sanders threw out the first pitch on opening night. “That’s what it is — it’s a community thing,” he said, almost wistfully. “And it’s especially good for the children, for the kids.”

As a presidential candidate, Mr. Sanders has turned saving minor league baseball into a pillar of his populist agenda, alongside his familiar calls for “Medicare for all” and tuition-free public college. It is an issue that especially, but also conveniently, resonates in Iowa, where the state’s caucuses on Monday will kick off the 2020 presidential nominating contests.

“I’m not surprised that presidential candidates are talking about it, especially in Iowa,” said Kim Parker, general manager of the state’s Burlington Bees. “If his interest in the topic has made M.L.B. reconsider the plan in any way, shape or form, then it is a blessing to have him.”

The Vermont team, known as the Lake Monsters, would also be eliminated as part of the proposed cuts. It is not clear that Mr. Sanders’s activism has much altered Major League Baseball’s plans. The recent letter seems to indicate that the league has been less than responsive thus far to any political pressure.

But if nothing else, Mr. Sanders’s push has reminded friends of the potential for one related bit of psychic redemption.