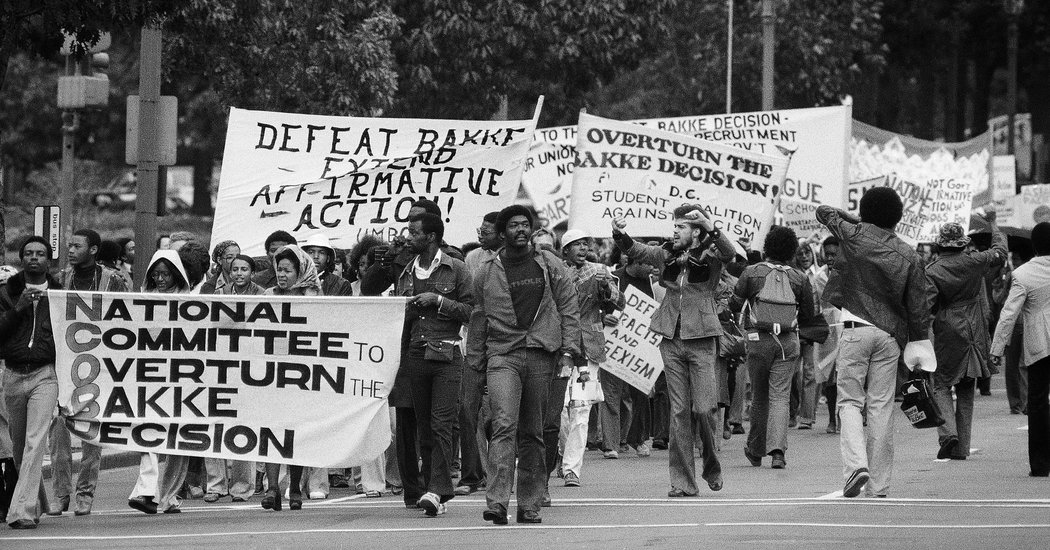 THE AFFIRMATIVE ACTION PUZZLE
A Living History From Reconstruction to Today
By Melvin I. Urofsky

For two and a half centuries America enslaved its black population, whose labor was a critical source of the country’s capitalist modernization and prosperity. Upon the abolition of legal, interpersonal slavery, the exploitation and degradation of blacks continued in the neoslavery system of Jim Crow, a domestic terrorist regime fully sanctioned by the state and courts of the nation, and including Nazi-like instruments of ritualized human slaughter. Black harms and losses accrued to all whites, both to those directly exploiting them, and indirectly to all enjoying the enhanced prosperity their social exclusion and depressed earnings made possible. When white affirmative action was first developed on a large scale in the New Deal welfare and social programs, and later in the huge state subsidization of suburban housing — a major source of present white wealth — blacks, as the Columbia political scientist Ira Katznelson has shown, were systematically excluded, to the benefit of the millions of whites whose entitlements would have been less, or whose housing slots would have been given to blacks in any fairly administered system. In this unrelenting history of deprivation, not even the comforting cultural productions of black artists were spared: From Thomas “Daddy” Rice in the early 19th century right down to Elvis Presley, everything of value and beauty that blacks created was promptly appropriated, repackaged and sold to white audiences for the exclusive economic benefit and prestige of white performers, who often added to the injury of cultural confiscation the insult of blackface mockery.

It is this inherited pattern of racial injustice, and its persisting inequities, that the American state and corporate system began to tackle, in a sustained manner, in the middle of the last century. The ambitious aim of Melvin I. Urofsky’s “The Affirmative Action Puzzle: A Living History From Reconstruction to Today” is a comprehensive account of the nonwhite version of affirmative action. This is a complex and challenging historical task, given that “no other issue divides Americans more.” But Urofsky, by and large, has executed it well. Following the United States Commission on Civil Rights, he defines affirmative action as a program that provides remedy for the historical and continuing discrimination suffered by certain groups; that seeks to bring about equal opportunity; and that specifies which groups are to be protected. Urofsky explores nearly all aspects of the program — its legal, educational, economic, electoral and gender dimensions, from its untitled beginnings during Reconstruction to the present. The one major missing part of the puzzle in his otherwise thorough account is the military, which is unfortunate since, as the military sociologist Charles Moskos pointed out, “nowhere else in American society has racial integration gone as far or has black achievement been so pronounced.” This deserved a long chapter.

Urofsky claims not to make the case for or against affirmative action but admits to being “conflicted” on the matter. He distinguishes between what he calls soft and hard affirmative action, the first aimed at removing barriers only, the second attempting positive action that results in the observable betterment of the excluded group. He repeatedly says that he favors soft affirmative action. But, to his credit, the “facts on the ground” that he assiduously marshals indicate that merely providing equal opportunity does not work, for reasons eloquently spelled out by President Lyndon Johnson in his celebrated 1965 commencement address at Howard University: “It is not enough just to open the gates of opportunity. All our citizens must have the ability to walk through those gates.”

Urofsky reveals that many presidents, administrators and activists, while proclaiming soft affirmative action, have struggled to make it work. Some, like John F. Kennedy, and especially Johnson, as well as Jimmy Carter and Bill Clinton, have publicly voiced their support for colorblind, anti-quota, equal opportunity only, and individualistic rather than group-based approaches, while quietly allowing their administrators to craft pragmatic programs that did just the opposite, to the benefit of the disadvantaged. Some, like Ronald Reagan and the elder George Bush, have openly attempted to abolish the program but failed. Richard Nixon (who else?) made it the centerpiece of arguably the most Machiavellian strategy in modern American political history: His Philadelphia Plan, with its blatant minority business set-asides and insistence on craft unions’ acceptance of blacks, was the most extreme hard version of the program ever undertaken, resulting in major improvements for blacks at all levels of the economy, to the applause of nearly every black leader. But it was also, deliberately, a key element in his notorious Southern strategy, successfully shattering the traditional bond between white working-class union members and the Democratic Party, and paving the way for the Reagan Democrats and the modern Republican ascendancy.

The nation’s jurists have been just as divided in their approaches, and Urofsky deploys his legal expertise to great effect in analyzing the numerous cases that have been argued over the policy. The irony of this struggle is that the courts have reached a compromise, saving the program by completely redefining its rationale from the original aim of remedying centuries of black disadvantage to that of promoting diversity, which, one might argue, could be achieved in the complete absence of blacks. Urofsky’s analysis of the DeFunis, Bakke and Weber cases of the 1970s is a gem. It not only clarifies for the layman the cases’ legal niceties but also concludes, instructively, that the less celebrated Weber case of 1979, in which it was decided that Title VII of the 1964 Civil Rights Act “did not foreclose private race-conscious affirmative action plans,” may have been the most consequential. It gave the private sector far more flexibility than government and academia in designing affirmative action programs.

It is in academia that affirmative action battles have been most ferociously fought, and Urofsky devotes two chapters to this. The first focuses on the turmoil of the ’70s, especially the City University of New York’s botched open enrollment program and the problem of minority faculty recruitment; the second deals with the current situation, and the shift from compensation to diversity as affirmative action’s main justification. The curious feature of this entire debate is that it is largely a praetorian squabble about who has the right to attend the nation’s most elite colleges and to join the nation’s elite. Urofsky agrees with Derek Bok and William Bowen (“The Shape of the River,” 1998) that it is a question of “principle versus principle, not principle versus expediency.” In fact, the issue is of relatively small consequence to the 75 percent of the nation’s colleges, many of them first-rate, that teach the vast majority of American students and accept nearly all applicants.

“The Affirmative Action Puzzle” deserves a better closing chapter. Urofsky claims that no coherent picture emerges from his painstaking study. To the question of whether disadvantaged minorities have benefited from the program, he answers, “Yes … and No.” It is questionable, however, whether affirmative action could have solved all or even most of the problems of blacks, women and other disadvantaged groups. That surely must await more fundamental structural and political changes that might address America’s chronic postindustrial inequality and labor precariousness. The remarkable thing is that affirmative action is now an integral part of the moral, cultural, military, political and economic fabric of the nation. Its businesses, educational system and political directorate have largely embraced it and the court undoes it at the cost of its own legitimacy. Even Donald Trump claims that “I’m fine with affirmative action. We’ve lived with it for a long time.” It has profoundly transformed the lives and opportunities of a substantial number of black people and the public honor of all of them.

The great merit of this meticulously researched, honestly crafted work is that it allows readers to draw their own conclusions about the value of this uniquely American experiment, quite independent of the author’s own conflicted views about it.