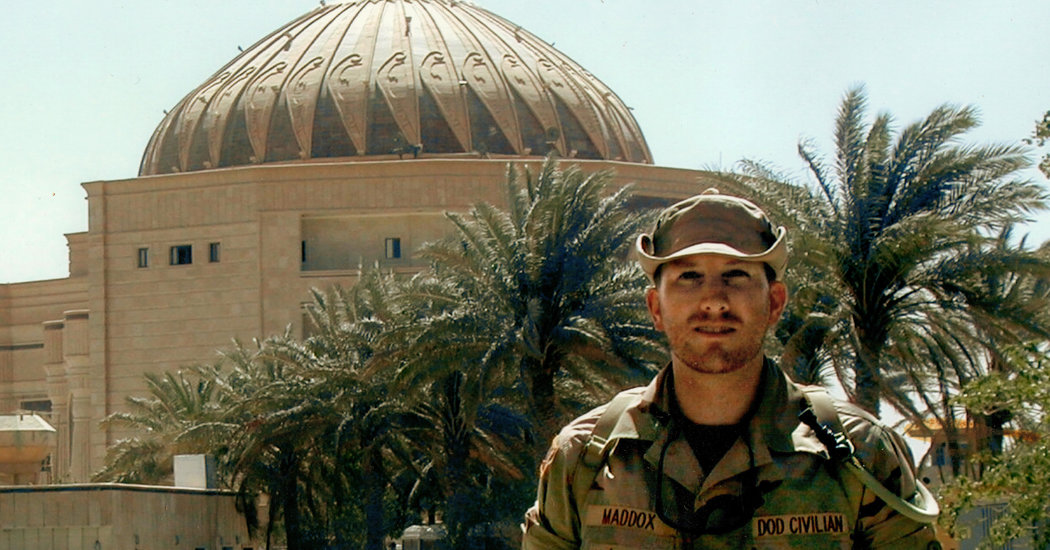 I rolled west from Baghdad in a convoy of soft-side Humvees. It was a morning in late June 2003, and I had traded a bottle of whiskey for the use of an American military police detachment as protection for a daylong mission to Abu Ghraib prison. As an intelligence officer for the Department of Energy assigned to the Iraq Survey Group — the American-led team searching for weapons of mass destruction in Iraq — I was scheduled to interview an Iraqi prisoner who had been captured weeks before, on suspicion of transporting stolen nuclear material. I couldn’t know it that morning, but the interview would entirely change my perspective on America’s involvement in Iraq, and set me on a decades-long course of struggling with the false narratives used to persuade us to march into that conflict and other ones.

I gripped my pistol tightly as we moved along in the doorless vehicles, occasionally pointing it in the direction of anything that came near the convoy. I had borrowed the weapon — no more than a party favor in that bacchanal of R.P.G.s and gold-plated Kalashnikovs — from a fellow intelligence officer, who asked me to return it with all of its bullets.

As we approached the outskirts of the prison, the road narrowed, and we drove through a frenetic marketplace. During Saddam Hussein’s long rule, families of Abu Ghraib prisoners had made the area their home, and many stayed there after Hussein had released his prisoners in the lead-up to the war. As our oversize vehicles stalled traffic and disrupted local business, men cursed us and spat on the ground. A butcher stared me in the eyes and hacked deeply into a hanging goat carcass. Children came within an arm’s length, demanding handouts and laughing mockingly.

[Sign up for the weekly At War newsletter to receive stories about duty, conflict and consequence.]

Finding the entryway to the prison was a relief — until an American service member explained that a convoy had been struck just outside the facility by a roadside bomb the day before, severing one soldier’s spine. A young guard manning an M60 machine gun waved us in while keeping his weapon aimed in our direction. I hardly felt safer than I did outside — the place was under a constant threat of attack.

There was a sense of anxiety in every facility I visited in Iraq, but the American soldiers at Abu Ghraib had an unusual look of dread and contempt in their eyes. The place felt completely detached from the headquarters I’d been dealing with in Baghdad, and I could tell their isolation was affecting them. At the time I knew nothing about the horrific human-rights abuses that took place behind those prison walls and would be revealed to the world 10 months later, but I could sense that everyone I encountered was on edge.

This was my first deployment to a “shooting war.” I had previously served in the Army, but by the time of the Sept. 11, 2001, attacks, I had left the military to go into nuclear-counterterrorism operations for the Department of Energy. I had privately questioned the motive for going into Iraq, suspicious of the way the administration had shifted its justification over time, but I still chose to go. Secretary of State Colin Powell’s now-notorious United Nations speech on Feb. 5, 2003 — when he argued that Saddam Hussein’s regime had developed weapons of mass destruction and posed an imminent threat — assuaged any reservations I might have had. “Every statement I make today is backed up by sources, solid sources,” he said. “These are not assertions. What we’re giving you are facts and conclusions based on solid intelligence.” There was no more trustworthy spokesman, I thought at the time.

A few months later, I deployed to Qatar and then to Iraq. The Iraq Survey Group would scour the countryside, excavating purported W.M.D. sites and interrogating dumbfounded Iraqi military officers. There was a core group of true believers who led the effort and controlled every meeting. The rest of us followed their lead, unsure what to expect. After just a short time with the group, I had little belief that we would find any nuclear weapons. During late-night rants, my fellow intelligence officers debunked the stories that the Iraqi government had access to African uranium, had developed special centrifuges or was driving biological-warfare trailers around the country. But nobody said anything during work hours. That argument had already been made and lost in Washington.

Instead, I eventually focused my work on counterterrorism questions. I felt that I could best carry out my duty and contribute something useful by following up on more realistic threats. A terrorist named Abu Musab Al-Zarqawi, then presumed to be affiliated with Al Qaeda, was reportedly active in the region and had supposedly shown interest in nuclear weapons. I wanted to know everything I could about his operations, and I thought the man arrested for transporting illicit nuclear material could potentially provide a link to al-Zarqawi’s network.

At Abu Ghraib, I interviewed my subject in an outdoor holding pen under a tent in a large courtyard. A double line of concertina wire separated me from what seemed like hundreds of prisoners. A few of them threw rocks that landed at my feet as I made my way to the tent. The intense heat of the sun soaked right through the canvas roof, my desert camouflage uniform and my body armor, and it felt like it was boiling my blood. A guard brought my subject. I offered him a cold bottle of water. He cried.

My line of questioning was simple: Tell me about the nuclear material you were transporting. His answers also were simple: I wasn’t transporting nuclear material; I didn’t do it. For a while I assumed his tears were a ploy. I applied greater pressure: Stop lying to me; tell me where you got it; we know everything. His crying intensified.

In the famous deck of cards that depicted Hussein’s henchmen, my subject wouldn’t even rank as a two of clubs. The truth is that this old man — caught with car parts patched together to look like a small radioactive-material container — was no more than a con artist. He probably just wanted to make some cash by selling the fake material to a sucker. Almost certainly he was crying in front of me out of genuine despair.

But my questions were unrelenting. I was determined to eke out any details that could offer clues about Al-Zarqawi. A colleague in the tent gave me a confused look, and later commented that my face was indecipherable during the interrogation. My subject protested his innocence and even tried to take my hands in his, pleading for his family’s security. In the end, I turned to the interpreter and whispered, “He doesn’t belong here.” He promised to tell the commanding officer. My comment was as much about the absurdity of the whole situation as it was about the prisoner’s innocence. I had risked the lives of a dozen soldiers to be there — only to find a small-scale confirmation of the ludicrous false premises under which we had invaded and occupied Iraq. The Iraqi weapons of mass destruction were no more than a bit of improvised sham, a con man’s counterfeit goods. In the process I had stumbled into one of the darkest places in wartime Iraq and into the most revealing truth of the conflict: Nobody belonged there.

When I returned to Washington, some weeks later, it was clear to me that people who hadn’t served in Iraq knew little of what was really going on. A friend asked me how the search for weapons of mass destruction was going. I responded wryly, “Well, I’m back, aren’t I?” I avoided explaining the enormity of it. I relied on funny stories of swimming in Uday’s pool or peeing in Hussein’s golden toilets to escape the conversation.

When the Iraq Survey Group’s interim progress report was released, in October 2003, the truth became unavoidable. It offered a thinly veiled admission of failure to find any convincing evidence of recent W.M.D. activity. I had often justified my participation as my duty, but that claim began to sound more and more like an excuse for blind adventurism. It became impossible to square my American sense of free will — our image of ourselves as empowered citizens participating in informed choices — with the reality of the way that we were hoodwinked into going along with the invasion of Iraq. I had been taught throughout my childhood and my military training that America conducts wars based on just cause, but the reality emerging from Iraq was that we had been compelled by deception.

A few months later, in April 2004, CBS News broke the story of torture at Abu Ghraib prison, revealing that American guards, maybe even some of the people whom I had seen at the prison, had beaten and abused prisoners. I was horrified. There had been little to stop me from harming my interviewee there, but doing so would have required moral bankruptcy. The actions of the guards at Abu Ghraib invalidated the American idea of liberation that I believed in. To me, the cruelty and abuse of power represented a perversion of American values.

In that moment, it became clear to me that the administration’s public narrative of the war was exactly what drove us to that dark place. The time-tested tropes of war for freedom and war of liberation had been used masterfully, and had been enabled by false claims of the Hussein regime’s involvement with Al Qaeda. We were fighting in a fantasy and our leaders knew it, even while we were there, yet we persisted.

I was repulsed by the idea that we could have been so easily manipulated. For a time I considered ending my government career. But I also felt that walking away would make me powerless to do anything to push back against the administration’s dishonesty. Instead, I refocused my intelligence career on understanding the underlying causes of war. Later, as an adjunct professor, I spent time developing an assessment of historical false justifications, and taught on the subject. To this day, I’m chastened by the memory of my experience at Abu Ghraib, and I’m haunted by the unknown fate of my interviewee. Like many veterans, I carry a deep desire to prevent another conflict like the invasion of Iraq, fueled by my understanding of the war’s absurdities. But I’m struck by the power of our national momentum toward going to war — especially unnecessary ones — and alarmed that this momentum seems nearly impossible to halt.