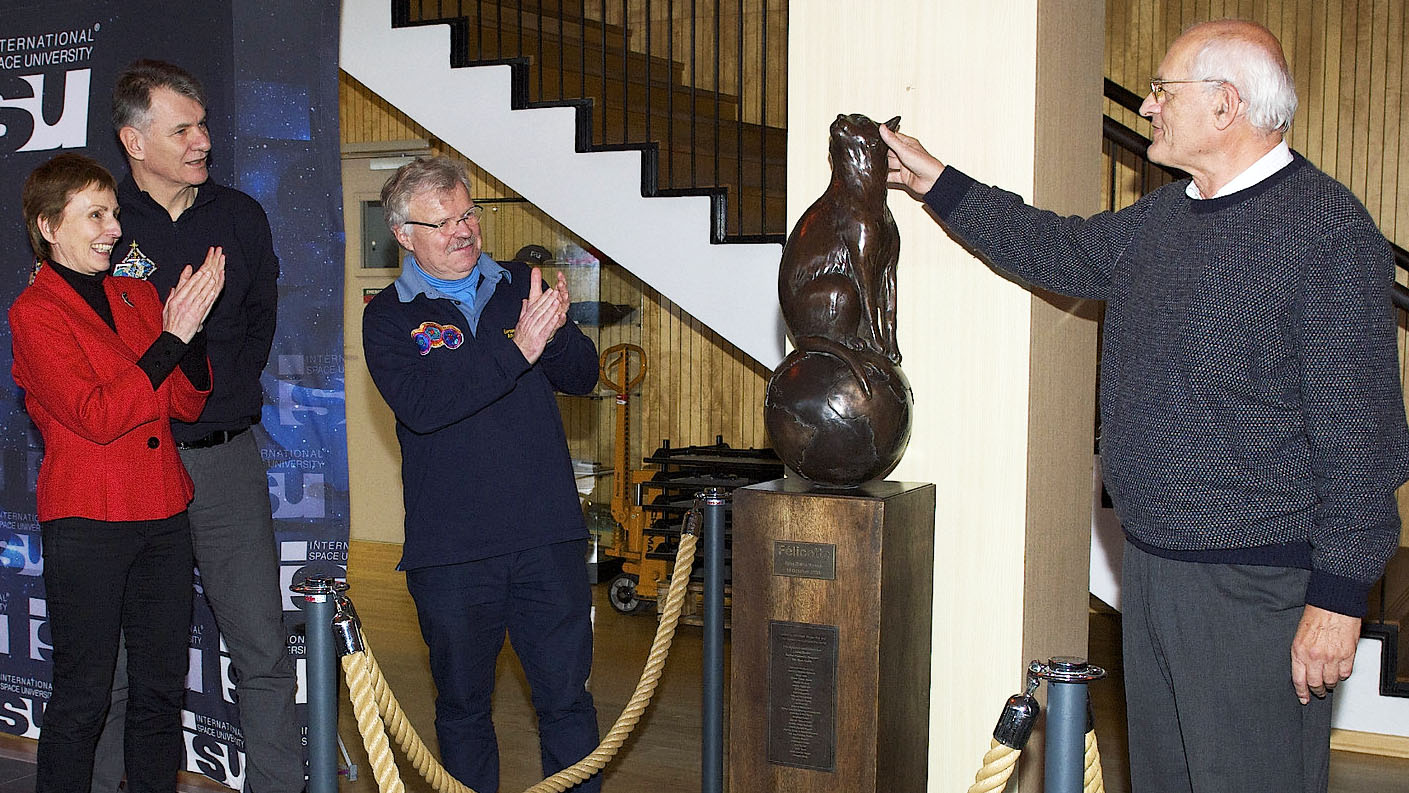 A new memorial for the first and only cat to go to space has arrived at its permanent home.

A bronze statue of the space cat now stands at the International Space University (ISU) in Strasbourg, France, two years after Matthew Serge Guy, a creative director and space cat fan in London, launched a Kickstarter campaign and raised about $57,000 to fund the project.

The memorial honors a French feline named Félicette who launched on a brief suborbital spaceflight in 1963. Although the space cat survived the 15-minute mission, she died about two months later when scientists removed electrodes from her brain to investigate how spaceflight affects the brain.

“Over the last 54 years, the story of the first and only cat to go to space has been largely forgotten. She deserves a proper memorial,” Guy wrote on Kickstarter.

“Although other animals in space, such as Laika the dog and Ham the chimpanzee, are well-known within popular culture and have lasting memorials, very few people are aware that a cat went to space at all,” he added. Guy launched the project in hopes that Félicette’s new memorial will help to spread the word about the cat’s little-known role in space history.

Located inside the Pioneer’s Hall at ISU, the 5-foot-tall (1.5 meters) bronze statue features Félicette perched on top of planet Earth and gazing up at the stars. The statue shares a room with a bust of Yuri Gagarin, the first man in space.

The grand unveiling of Félicette’s statue took place during a celebration of the 25th anniversary of ISU’s Master of Space Studies program, on Dec. 18. Three European Space Agency astronauts and ISU graduates — Helen Sharman, Paolo Nespoli and Reinhold Ewald — participated in the unveiling ceremony, along with Lilla Merabet, vice president of the Grand Est region in France, and Philippe Jung, chairman of the History Council of the Aeronautical and Astronautical Association of France and co-author of the academic paper “Felicette, the only space cat,” which was presented at the 2018 International Astronautical Congress.

Félicette was a last-minute addition to the program for the ISU event, and Guy said that he didn’t publicize the statue’s unveiling beforehand over concerns that the statue would not arrive in Strasbourg in time. Because the audience was limited to about 100 ISU alumni and staff, Guy said that he is considering holding another unveiling event around the 57th anniversary of Félicette’s mission in October. That event would be open to backers of the Kickstarter campaign and their guests. (To help gauge potential interest in the event, Guy is asking backers who would like to attend to let him know by filling out this short Google form.)

If you’d like to visit the memorial on your own time, be sure to reach out to ISU and let the university know before you show up at the Pioneer’s Hall, as the space is an active conference hall that is sometimes occupied and off-limits during meetings or exams.