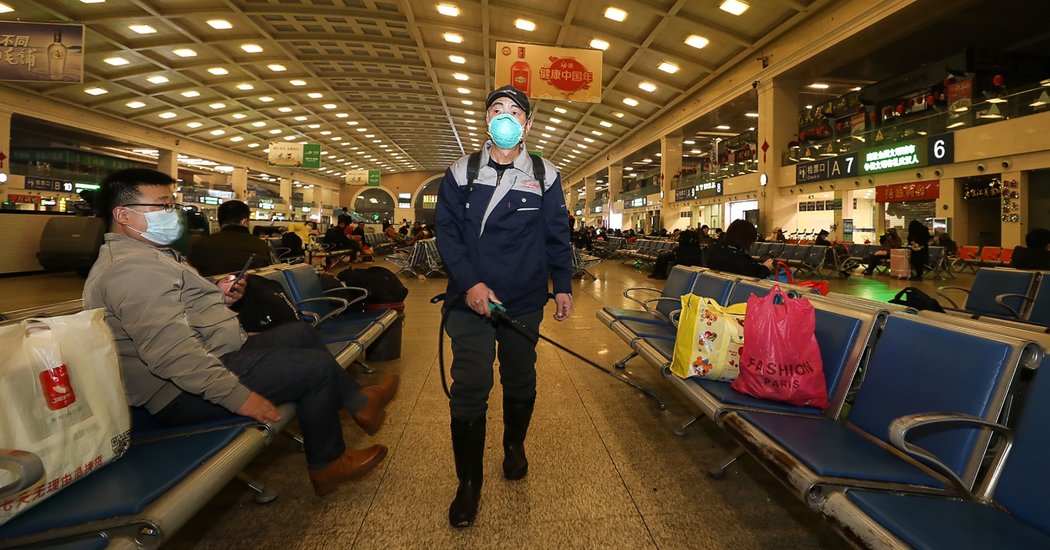 BEIJING — The Lunar New Year holiday in China is the world’s largest annual migration of people, with hundreds of millions of travelers fanning out across the country and the world, and hundreds of billions of dollars spent on hotels, restaurants and shopping.

Now, with a mysterious new pneumonia-like coronavirus that spreads between people, it’s also an epidemiologist’s nightmare.

The authorities are scrambling to control a virus that has sickened more than 470 people, killed at least 17, and spread around the region and to the United States. Officials are imposing restrictions on travel out of Wuhan, the central Chinese city of more than 11 million at the epicenter of the outbreak, and stepping up screening at transportation hubs. The World Health Organization was expected to hold a meeting on Wednesday to discuss whether to declare the outbreak an international health emergency, which would escalate the global response.

Before the virus emerged, the government had estimated that Chinese travelers would make three billion trips over the holiday period, also known as the Spring Festival. But on Wednesday, a senior health official delivered a stark warning: the huge tide of travel during the holiday would make it more difficult to contain the outbreak. Li Bin, a deputy head of China’s health commission, also said that the virus could mutate and spread more easily.

Many Chinese have already canceled their travel plans, forgoing vacations and what for some is their only chance to return home for family reunions during the year. The Lunar New Year, a weeklong holiday, begins on Friday, when the country says farewell to the Year of the Pig and welcomes the Year of the Rat.

“After we heard how bad the situation was on Monday, we held a family meeting and decided that it just wasn’t worth the risk,” said Yan Chaowei, 32, a housewife in Shanghai who was planning on taking a seven-hour bullet train to her family home in southeastern Jiangxi Province.

“It just wouldn’t be a relaxing trip, especially with a small child,” she added. “When we finally made the decision to stay home, we sighed with relief.”

[Here’s a quick summation of what’s known about the coronavirus outbreak.]

Even some working in the travel industry were nervous. Flight attendants at Cathay Pacific, Hong Kong’s leading airline, publicly lobbied the company to allow them to wear masks during all flights, a request that was granted on Wednesday.

“It will be too late and too painful for all of us and the Company to wait until one of our own is infected,” the airline’s union for flight attendants said in a statement. “The damage caused will be catastrophic.”

In Wuhan, a major transportation hub that is popular among tourists for its colonial architecture, spicy noodles and proximity to the Yangtze River, the authorities have urged residents to stay put and others to avoid visiting. They have stopped short of imposing a full lockdown, but issued a ban on large public gatherings and performances at hotels and sightseeing destinations.

“We recommend that people not come to Wuhan if it isn’t necessary,” Zhou Xianwang, the mayor of Wuhan, said in an interview on Tuesday with the state broadcaster CCTV.

To encourage travelers to stay away from Wuhan, tour companies are promising penalty-free refunds for hotel bookings and air and train tickets to and from the city. Travel operators are suspending itineraries with stops there, raising concerns of a slump during what is usually one of the most lucrative weeks of the year.

[Read about the first confirmed case of the Wuhan coronavirus in the United States.]

For Chinese companies, the outbreak could deal yet another blow at a time of slowing economic growth.

According to official estimates, Chinese spent $74 billion on travel and $145 billion on shopping and food during the Spring Festival holiday last year. The holiday is also one of the most profitable periods for the Chinese box office, but there are concerns that potential moviegoers might stay home to avoid sitting in enclosed spaces with strangers.

Many also take advantage of the weeklong holiday to travel abroad, particularly in the region, but may be forced to change their plans this year.

Tsai Ing-wen, Taiwan’s president, said on Wednesday that all travel by tour groups between Wuhan and Taiwan would be suspended, a day after her government confirmed the island’s first case of the new coronavirus.

In Hong Kong, one of the biggest travel agencies said it was cutting all tour groups to, or passing through, Wuhan until the end of March, according to news reports.

Experts have warned that with the travel rush already underway this week, the virus’s continued spread may be inevitable.

Zhong Nanshan, a prominent scientist who is leading a government-appointed panel of experts working to control the outbreak, singled out the cramped train rides that many Chinese have to endure during the holiday as potential hotbeds of transmission.

Some international health experts, including the World Health Organization, have praised the Chinese government’s response as timely.

But the government, particularly in Wuhan, has drawn public criticism at home for what some see as a delay in the reporting of cases that evoked the memory of a 2002-2003 outbreak of SARS in which the Chinese government withheld critical information. A top committee of the ruling Communist Party warned officials on Tuesday in a social media post that anyone who sought to hide infections would be “forever nailed to history’s pillar of shame.”

Outside of China, countries including the United States and Australia have stepped up screenings and security measures at airports for travelers coming from China. Experts say there is still a risk that the symptoms of the virus don’t become apparent until after the sick have crossed the border, as was the case in the United States, where the first confirmed case was a resident of Snohomish County, Wash., who had recently traveled around Wuhan.

But some experts are urging the public to remain calm.

“This is a SARS-like event but not as severe as SARS,” said Wang Linfa, director of the emerging infectious disease program at Duke-NUS Medical School in Singapore. “During an outbreak like this from an unknown pathogen, overreacting might be better than underreacting, but we still have to be realistic.”

Zhu Niancheng, 19, a chemistry major at a university in Wuhan, appeared to be heeding that advice on Wednesday as he sat on a suitcase outside a Beijing train station smoking a cigarette.

“Don’t worry, I’m not going to Wuhan,” he said, as a phalanx of People’s Liberation Army soldiers in green uniforms and black face masks marched behind him.

Asked if he was concerned about his classmates back in Wuhan, the teenager laughed and said, “I’m not really afraid. We just make fun of each other on WeChat, like “yo, you still alive?”