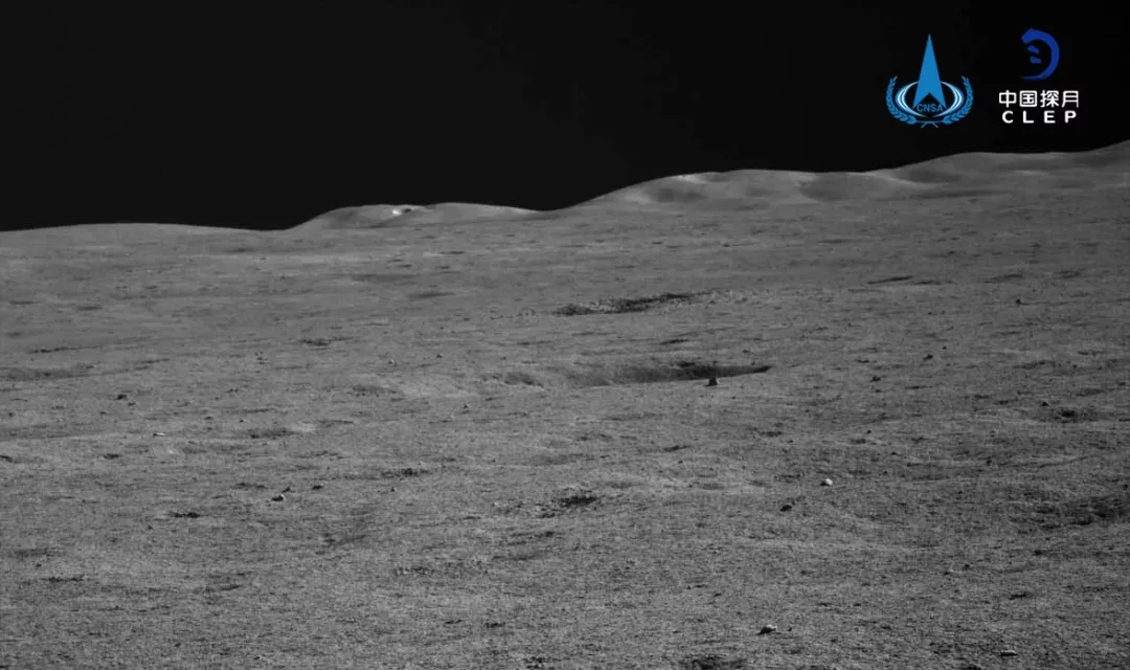 China’s long-lived lunar robots Chang’e-4 and Yutu-2 are once again at work on the far side of the moon, where they woke up for their 14th day on Jan. 18 and 19 respectively.

And those of us here on Earth can take a new look through the lander’s and rover’s lunar eyes, as China released a huge batch of data on Monday (Jan. 20). The data release includes high-resolution images of the moon from the Chang’e-4 lander’s terrain camera and the panoramic camera on the Yutu-2 rover.

Chang’e-4 just reached the first anniversary of its historic landing in Von Kármán Crater, within the gigantic South Pole-Aitken basin. The newly published photos cover nearly a year of pioneering exploration on the far side of the moon, where no previous mission has landed.

Related: Chang’e 4 in Pictures: China’s Mission to the Moon’s Far Side
More: China On the Moon! A History of Chinese Lunar Missions in Pictures

Yutu-2 approaches a crater which was said to contain a “mysterious” material, according to a Chinese science outreach post, in this image processed by Doug Ellison.

A view of Chang’e-4 lander imaged by Yutu-2. This panoramic view was processed by Doug Ellison using data from China’s Chang’e 4 image library.

Yutu-2, casting a shadow, looks back toward the Chang’e-4 lander in July 2019. Image processed by Doug Ellison.

Yutu-2 drive map to the end of lunar Day 13. This map was compiled by Phil Stooke using data from China’s Chang’e 4 mission.

The China Lunar Exploration Program made the data available online at a dedicated website for the country’s moon missions.

Oh – this is so pretty. pic.twitter.com/lxkfBnKbAOJanuary 4, 2020

Ellison also stitched together single shots to produce larger images, along with cylindrical and azimuth panoramas. His gallery of Chang’e-4 images is viewable here.

Images include close-up views of craters and regolith, or lunar soil, in Von Kármán Crater, as well as various shots of the lander and rover, the distant skyline and Yutu-2’s roving tracks.

Four pics of Von Kármán crater from a couple thousand images released from the Chang’e-4 rover Yutu-2’s PCAM. Thanks to @doug_ellison for the instructions & check out the amazing stuff in his thread (processing, 3D models, panoramas…) https://t.co/Vxoese7Q70 pic.twitter.com/8CouxKgCBQJanuary 5, 2020

Techniques Spatiales, a French space-related Twitter account, converted data from the lander’s camera into image files that can be accessed here.

Philip Stooke, a cartographer at the Centre for Planetary Science and Exploration at Western University in Ontario, has used the new data to refine maps charting the roving route of Yutu-2. Over its first 13 lunar days, Yutu-2 drove 1,171 feet (357 meters).

The Chang’e-4 lander and Yutu-2 rover have completed 13 lunar days on the moon. The solar-powered duo awaken between 24 and 48 hours after sunrise over the mission landing site and power down about 24 hours before sunset. Searing-hot lunar days and the brutally cold nights each last around 14 Earth days.

Yutu-2 began its 14th lunar day on Jan. 18, and the lander did so on Jan. 19, according to the Chinese Lunar Exploration Program. Both the rover and lander have now exceeded their design lifetimes of three months and one year and continue to operate with all science payloads in a healthy condition, according to the China National Space Administration.

Because the lunar far side never faces the Earth, data from the spacecraft are relayed via the Queqiao communications satellite, which is positioned around a gravitationally stable point beyond the moon. With the spacecraft on the lunar surface performing well, Queqiao has recently kicked off a pioneering low-frequency radio-astronomy experiment.

Next up in its lunar campaign, China is preparing to launch its Chang’e-5 sample-return mission late this year. Chang’e-5 will launch on the huge Long March 5 rocket and will be the first mission to retrieve samples from the moon since the Soviet Union’s Luna 24 mission in 1976.