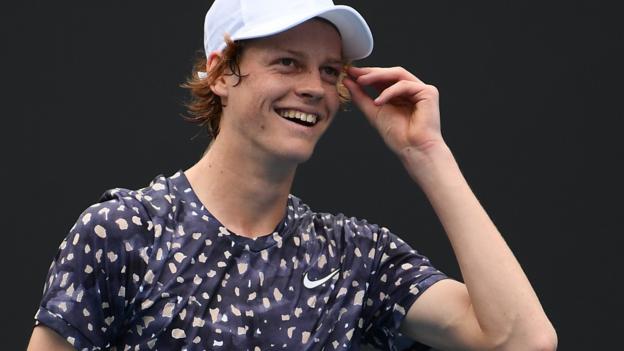 He swapped skis for a tennis racquet and now teenager Jannik Sinner is attracting the attention of one of the sport’s greats at the Australian Open.

The 18-year-old Italian beat Australian Max Purcell to reach the second round of a Grand Slam for the first time, following praise from Roger Federer.

The Swiss has backed Sinner and says “we’ll see so much more from him”.

The world number 82, who made his major debut at last year’s US Open and won the NextGen ATP Finals in Milan in November, will face Hungary’s Marton Fucsovics in the next round.

“He has great footwork for a big guy, because we forget how tall he is,” said Federer, who along with Spanish world number one Rafael Nadal has hit with 6ft 2in (1.88m) Sinner in Melbourne.

“He can play like most of the best movers in the game right now, he can also play open stance and closed stance, which I think is a huge advantage for movement for the future.”

Sinner was a competitive junior skier but switched his focus to tennis five years ago and says he is still learning.

“Because I’m young, forehand and backhand are quite solid. The shot is getting better and better, which is our goal,” he said.

“You cannot play the whole match with the same speed. You have to change a little bit the ball heights, which I have to learn. I have to learn everything.”