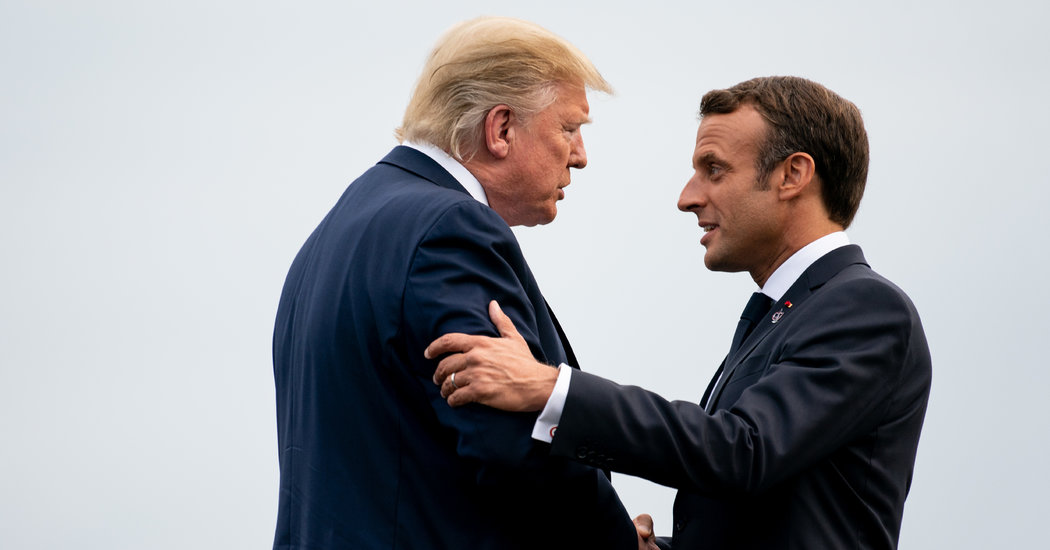 PARIS — France and the United States appeared to strike a temporary truce in a trans-Atlantic trade war, French officials said Tuesday, after President Emmanuel Macron agreed to suspend a tax on American technology giants in exchange for a postponement of threatened retaliatory tariffs on French goods by the Trump administration.

The apparent détente emerged after Mr. Macron and President Trump agreed in a phone call late Sunday to grant more time for negotiations over a global solution to taxing Amazon, Facebook and other digital companies.

“We will work together on a good agreement to avoid tariff escalation,” Mr. Macron said on Twitter Monday. “Excellent!” Mr. Trump replied on the social media platform.

A deal between the two countries would buy time for the development of an international framework to prevent large multinational companies and digital giants from avoiding taxes by shifting profits between countries.

Negotiations are continuing at the Organization for Economic Cooperation and Development, but the slow pace of the talks has frustrated European officials — and especially the French government, which has insisted that digital businesses must pay “fair taxes.”

France’s finance minister, Bruno Le Maire, said Tuesday at a meeting in Brussels with European Union officials that Presidents Macron and Trump had “agreed to avoid all escalation between the U.S. and France on this digital tax issue.” But he cautioned that discussions on finding a compromise “remain difficult.”

White House officials declined on Tuesday to confirm the scope of the apparent deal. Late Monday, they released a statement that said the heads of state had “agreed it is important to complete successful negotiations on the digital services tax.”

Mr. Le Maire is scheduled to meet with Treasury Secretary Steven Mnuchin at the World Economic Forum in Davos, Switzerland, on Wednesday to discuss next steps.

Silicon Valley’s tech giants are a target for Europe. Last summer, the European Commission unveiled a proposal to significantly revamp how technology companies are taxed in the 28-nation European Union.

The attempt to prevent global companies from avoiding taxes has intensified a fight between the United States and Europe, as policymakers on both sides of the Atlantic spar over efforts to impose new taxes on foreign firms.

France drew special scorn from President Trump after officials announced plans to impose a 3 percent tax starting Jan. 1 on the revenues that companies earn from providing digital services to French users. The government estimated a €500 million (about $563 million) windfall.

Mr. Trump insisted that only the United States could tax American-based companies, and threatened to retaliate with American tariffs of up to 100 percent on French wine, cheese, handbags and more.

On Tuesday, Mr. Le Maire signaled that France would take a step back from the dispute by offering to postpone collection of the tax until the end of 2020, giving time for negotiators at the O.E.C.D., an intergovernmental economic organization with 36 member countries, to hammer out an agreement on a broader framework to tax digital firms.

The digital tax is one of the thorniest issues around. The O.E.C.D.’s original proposal, released late last year, would allow countries to tax large multinationals even if they did not operate inside their borders. It suggests companies should pay taxes largely based on where their sales occur, and on which profits are subject to taxation.

“In a digital age, the allocation of taxing rights can no longer be exclusively circumscribed by reference to physical presence,” the proposal states.

Mr. Le Maire has been especially vocal about taxing Facebook and other big digital players, saying governments must stand up to tech behemoths that have become the equivalent of sovereign states and act with virtual impunity, maneuvering to keep their tax bills low across the world.

In a recent speech, he noted that 15 countries will have their own national tax on digital giants by June, including Italy and Austria. The Czech Republic, Britain, Turkey, Israel and India are also making plans.

“Digital taxes are going to happen one way or another. We prefer an international solution. But it’s up to the U.S. to decide,” he said.