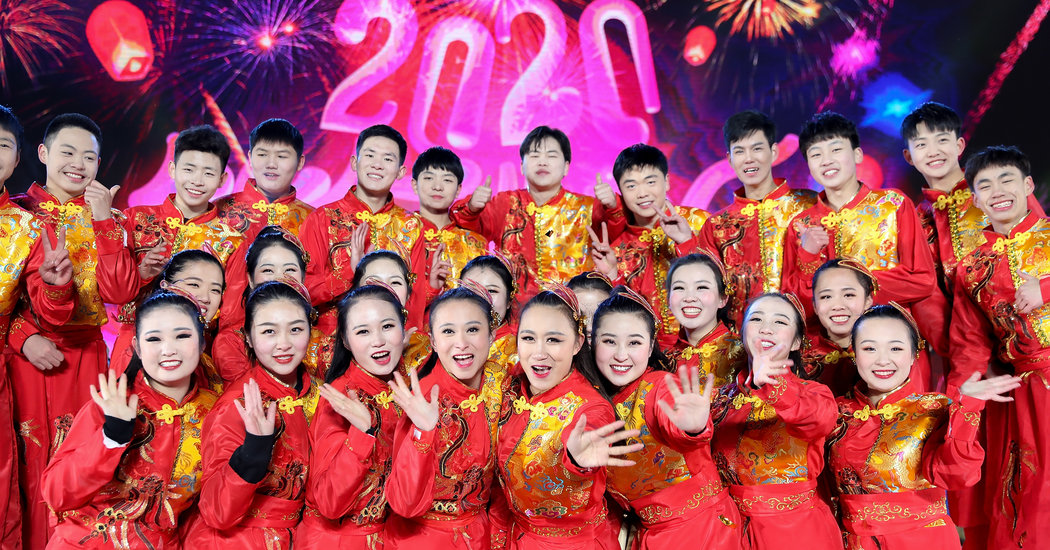 Chinese leaders stretching back to Deng Xiaoping have often thought in terms of decades. A decade encompasses two of China’s famous five-year plans, and it’s a long-enough period to notice real changes in a country’s trajectory.

As it happens, I spent time in China at both ends of the decade that just ended, first in 2010 and again recently. And I was left with one main conclusion: China has just enjoyed a very good decade.

Yes, it still has big problems, including the protests in Hong Kong. But by the standards that matter most to China’s leaders, the country made major gains during the 2010s. Its economy is more diversified. Its scientific community is more advanced, and its surveillance state more powerful. Its position in Asia is stronger. China, in short, has done substantially more to close the gap with the global power that it is chasing — the United States — than seemed likely a decade ago.

Many Americans, of course, understand that China is on the rise and are anxious about it. Yet I also returned from my trip thinking that this American anxiety tends to be misplaced in one crucial way: China is not preordained to supplant or even match the United States as the world’s leading power. China’s challenges are real, not just the protests in Hong Kong but also the dissent in Xinjiang and Tibet, the bloat in its state-run companies and the looming decline in its working-age population.

The No. 1 reason China has made such stark progress in geopolitical terms is that its rival just endured a bad decade by virtually every measure. While China takes more steps forward than backward, the United States is moving slowly in reverse.

Incomes, wealth and life expectancy in the United States have stagnated for much of the population, contributing to an angry national mood and exacerbating political divisions. The result is a semidysfunctional government that is eroding many of the country’s largest advantages over China. The United States is skimping on the investments like education, science and infrastructure that helped make it the world’s great power. It is also forfeiting the soft power that has been a core part of American pre-eminence.

President Trump plays a telling role here. More so than his predecessors, he has been willing to treat China as the strategic threat that it is. Yet he is confronting it so ham-handedly as to strengthen China.

Instead of building a coalition to manage its rise — including the Asian nations in China’s shadow — Trump is alienating allies. Instead of celebrating democracy as an alternative to Chinese authoritarianism, he is denigrating the rule of law at home and cozying up to dictators abroad. Trump, as Keyu Jin, a Chinese economist at the London School of Economics, says, is “a strategic gift” for China.

The recent trade spat is an example. The Trump administration was right to take a tougher line. But after imposing unilateral sanctions, Trump then accepted a truce that did not do much to address the core problems, like China’s corporate subsidies.

The current version of the United States doesn’t seem to know quite what it is — global democratic leader or parochial self-protector — and the confusion benefits China. After the Trump administration this year asked 61 countries to bar Huawei, the Chinese telecommunications company, the response was embarrassing: Only three have done so. President Emmanuel Macron of France now argues that Europe should position itself as a third global power between the United States and China, rather than what it has been — an American ally.

There is an unending debate among China experts about whether the country is weak or strong. The answer is that’s it’s both. But its direction is clear. China continues to become stronger.

The maturing of the economy felt particularly striking to me as I compared my two visits. Although growth has slowed, from about 10 percent a year at the decade’s start to less than 7 percent now, part of that slowdown was inevitable, as the country became less poor. The encouraging news for China is that, as Neil Shen, the founding partner of the venture capital firm Sequoia Capital China, says, “the quality of the growth has been much improved.”

When I talked with Chinese leaders and business executives in 2010, they spent a lot of time lamenting two problems — a lack of innovative companies and a low level of consumer spending. I didn’t hear those laments this time.

Today, China is home to perhaps the world’s hottest social media app, TikTok, which is more popular than Facebook among American teenagers, according to a recent survey. Other innovators are likely to follow, because China’s digital economy now has some advantages that not even the American version does.

Instead of being fragmented among dozens of apps — one for Starbucks, others for Amazon and airlines and so on — much of Chinese commerce happens within one of two digital networks — WeChat Pay and Alipay. People open one app and can pay for almost anything, in stores or online. The simplicity encourages further retail innovations, and Facebook and Google are trying to mimic this model. It feels like the future of commerce.

It’s also part of a larger advance in China’s consumer economy. Consumer spending now accounts for about 39 percent of China’s G.D.P., up from a low of 35 percent in 2010. The word “consumerism” may have negative connotations in the United States, where such spending accounts for about 68 percent of G.D.P., but it means something quite different in recently poor countries. It signifies a shift away from an economy dominated by sustenance farming and smokestacks and toward the comforts of modern life.

One of my stops was Nanjing, China’s 12th-largest city, best known to outsiders as the site of a civilian massacre by Japanese troops in the 1930s. That history makes the city a symbol of the humiliations China suffered for much of the 20th century. Those humiliations continue to shape pop culture; a remarkable share of contemporary television shows cast the Japanese military as villains.

More quietly, though, Nanjing embodies the growth of a middle-class consumer culture. The city’s subway system opened only 14 years ago and now transports one billion riders a year. It’s clean and bustling, and the trips I took each cost either 2 or 3 yuan (about 28 cents or 42 cents). Nationwide, almost 30 other cities have opened subways since Nanjing did, giving China the world’s largest subway ridership.

Nanjing is also one of the stops on the high-speed train line that opened between Shanghai and Beijing in 2011. Nanjing is roughly as far from Beijing as New York is from Cincinnati, and the express train takes less than four hours.

This infrastructure makes all kinds of economic activity easier — commuting to work, taking vacations or simply going shopping. On a recent Saturday night at Nanjing’s seven-story Deji Plaza mall, the restaurants were packed, as were the aisles at Uniqlo, even at 9 p.m.

Beyond the economy, China has also made stark progress in other areas over the past decade. It is close to becoming the world’s leading funder of scientific research and development, thanks to soaring increases in China and meager ones in the United States. The quality of American science remains higher, but the gap has narrowed.

China’s military has also become stronger. China is now the largest trading partner not only of Japan, South Korea, Thailand, Vietnam and Indonesia but also of Australia, Brazil and South Africa. And start-up companies have become dynamic enough to lure a growing number of Chinese graduates of American universities to return home, Matthew Slaughter, the dean of Dartmouth’s Tuck School of Business, told me — shortly after he had attended an alumni event in Beijing.

Increasingly, this trade brings cultural and political sway. Just look at the National Basketball Association’s awkward attempts to placate China after a Houston Rockets executive dared to post a Twitter message (quickly deleted) expressing support for Hong Kong protesters. N.B.A. officials understood, as many other corporate executives do, that Beijing effectively holds veto power over their plans for growth.

China’s leaders, in turn, have started shedding the humility that had characterized much of their foreign policy since Deng. At a recent conference I attended on the outskirts of Beijing, with Bill Gates, Henry Kissinger, Henry Paulson and many American officials and executives, the swagger of the Chinese officials was notable. Some of the Americans delivered blunt criticism of China’s economic policy. Chinese officials largely ignored the complaints.

“We Chinese people know very well what we have, what we want and what it takes,” Wang Qishan, China’s vice president, told the conference, the New Economy Forum. “We have the confidence, patience and resolve to realize our goal of great national rejuvenation.”

China has now exceeded the world’s expectations for three decades in a row — which, of course, does not guarantee that the streak will continue in this new decade.

China still has a long way to go. Its foreign policy will be made more difficult by the growing wariness of China’s power in other countries. Its economy will have to cope with debts from its building boom, and President Xi Jinping’s support for politically obedient — but often inefficient — state-managed companies isn’t helping. The sharp decline in the working-age population over the next quarter-century, thanks to the old one-child policy, will probably present China’s biggest challenge since the 1989 democracy movement.

A decade from now, I can easily imagine China as an even stronger rival to the United States — dominating its Pacific realm and leading a loose global coalition of authoritarian states — or as a weaker one, struggling to manage internal dissent and tensions with its Asian neighbors. But the United States should feel some urgency about the possibility of the first scenario.

On my last day in Beijing, I visited the Forbidden City, the complex of old imperial palaces, which Xi has ordered spruced up, in part to remind people that a powerful China is the historical norm. To make sense of the trip, I sat down in a courtyard and looked back at two lists that I had made during my 2010 visit.

One summarized the steps that China needed to take in the years ahead to become stronger — increasing consumer spending, strengthening its scientific sector, becoming more innovative and so on. The other listed the steps the United States should take to stay strong — like reducing inequality and investing more in the future. The contrast, between progress and stagnation, was clear. I think the rational conclusion is to be worried about the future of American power.