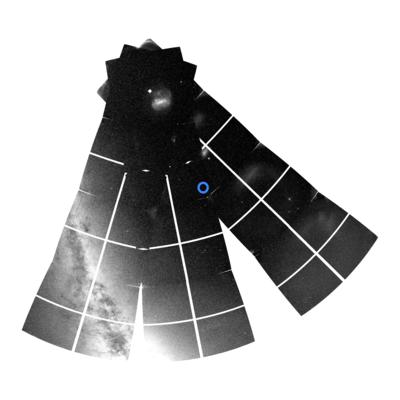 A planet-hunting telescope recently made a new discovery about the Milky Way’s past cannibalism.

Data from NASA’s Transiting Exoplanet Survey Satellite (TESS) showed the age of an ancient star in our galaxy that has a curious life story.

The star is called v Indi and is located in the southern-sky constellation Indus. Scientists discovered that the star is 11.5 billion years old. What’s more, a partnership with the European Space Agency’s Gaia telescope showed that v Indi’s motion changed forever after a galactic collision, according to new research.

“This exciting study … has provided us with a more precise date of when the smaller Gaia-Enceladus galaxy was swallowed by the young Milky Way,” Barry Smalley, a co-author on the research and a senior lecturer at Keele University in the U.K., said in a statement. “While this occurred over 10 billion years ago, the evidence is still strewn across the night sky, allowing us to piece together events that happened early in the history of our galaxy.”

The primary mission of TESS is to spot planets crossing in front of their parent star, but the spacecraft’s instruments can be repurposed for many other types of investigations. For this study, TESS used a technique called asteroseismology to track the oscillations of the star to estimate its age. Scientists then combined that work with observations from other ground and space observatories.

The resulting analysis suggested that v Indi was born in the Milky Way’s halo (or gassy fringe), and that it was “kinematically heated” by the Gaia-Enceladus collision. The age of the star also implies that the galactic merger would have begun roughly between 11.6 billion and 13.2 billion years ago.

“Since the motion of ν Indi was affected by the Gaia-Enceladus collision, the collision must have happened once the star had formed,” said lead author William Chaplin, a lecturer in astrophysics at the United Kingdom’s University of Birmingham, in a statement from his institution. “That is how we have been able to use the asteroseismically determined age to place new limits on when the Gaia-Enceladus event occurred.”

The research was published Jan. 13 in the journal Nature Astronomy.