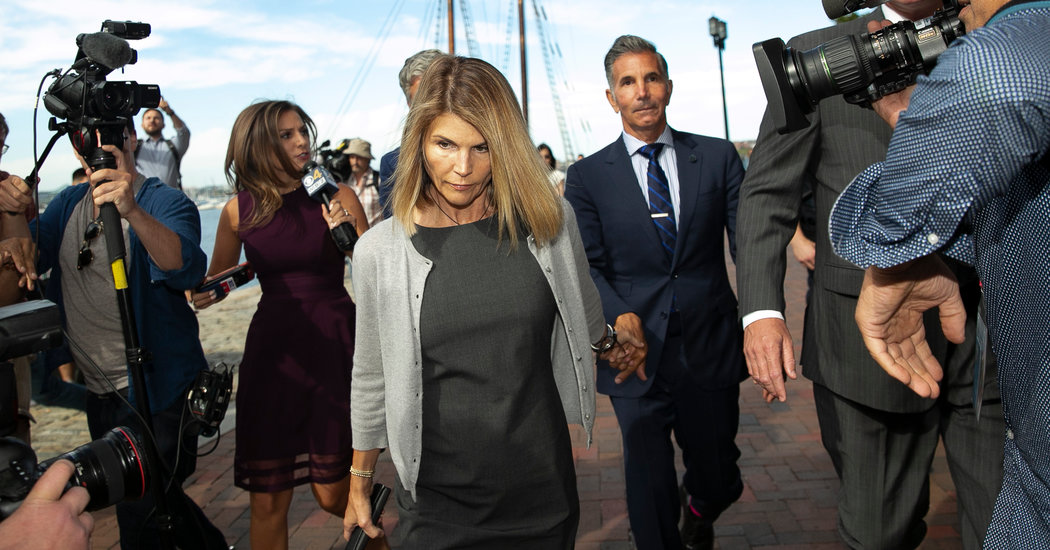 The emails were solicitous, offering to arrange a customized tour of campus or to set up a one-on-one meeting for the actress Lori Loughlin’s elder daughter with a university official.

Even as Ms. Loughlin and her husband were conspiring, prosecutors say, to bribe their daughter’s way into the University of Southern California, the school itself was courting them for donations and offering special treatment of the daughter’s application, new emails disclosed in the college admissions case show.

Ms. Loughlin and her husband, the fashion designer Mossimo Giannulli, are among more than a dozen parents who are still fighting charges in the sprawling prosecution, which in the past year has become a symbol of a college admissions system distorted by privilege. So far, 19 parents have pleaded guilty. Most of the remaining parents are charged with seeking to bribe U.S.C. athletic officials to admit their children as recruited athletes based on false credentials.

As the case moves closer to a likely trial, it is becoming increasingly apparent that these parents will seek to highlight U.S.C.’s culture of mixing admissions with fund-raising. Most of them, as part of the alleged scheme, made donations to the U.S.C. athletic department in connection with their children’s applications. Motions by several of the defendants suggest they will argue, essentially, that they could not have defrauded the university, as prosecutors say, because the university was actively seeking such donations and offering a leg-up in admissions in return.

The pattern of U.S.C. offering advantages to donors was underscored by the emails disclosed on Tuesday by prosecutors, which show an unnamed U.S.C. development official reaching out to Mr. Giannulli in late September of 2016 to “check in” on his daughter’s application.

“Please let me know if I can be at all helpful in setting up a 1:1 opportunity for her, customized tour of campus for the family, and/or classroom visit?” the official wrote to Mr. Giannulli, adding, “I’d also be happy to flag her application.”

After Mr. Giannulli sought to deflect the official’s offers, the official wrote back and proposed a meeting to discuss “your own involvement with USC.”

“I’d love to be able to update you on the amazing stuff that’s happening,” the official wrote. “How about meeting in your area on Oct. 3rd, 4th, or 5th?”

Mr. Giannulli responded, “I’ve been to the school a few times and have some folks that keep me abreast of the latest and greatest!” Then he forwarded the chain to Ms. Loughlin with a note saying, “The nicest I’ve been at blowing off somebody.”

U.S.C. said in a statement: “What was being offered to the Giannullis was neither special nor unique. Tours, classroom visits and meetings are routinely offered. The primary purpose of a flag is to be able to track the outcome of the admission review process. It is not a substitute for otherwise being qualified for admission to USC.”

In a motion in December seeking to force the government to disclose more evidence in the case, lawyers for Ms. Loughlin and Mr. Giannulli wrote that the couple planned to prove their innocence at trial by showing that they believed the payments the government had characterized as bribes — $100,000 in donations to U.S.C.’s athletic department, and $400,000 in donations to another nonprofit organization — were legitimate donations.

“It is common knowledge that universities — as part of their legitimate admissions process — regularly solicit donations from the families of prospective students, and that such donations can have a material effect on admissions decisions,” the lawyers wrote.

The government, in its filing on Tuesday, contended that the emails between Mr. Giannulli and the development official showed that Mr. Giannulli and Ms. Loughlin “specifically rejected this ‘legitimate’ approach,” instead pursuing an illicit scheme whereby an athletic official, in exchange for bribes, agreed to pass the couple’s two daughters off as coxswains for the women’s crew team.

But it is not the first time the case has exposed an unseemly side of U.S.C.’s admissions process.

Documents previously filed in the case showed that the university’s athletic department kept spreadsheets of “special interest” applicants that it was pushing for, with notes like “250,000 signed pledge” and “50,000 ask.”

In one instance, the former senior associate athletic director, Donna Heinel, who is facing racketeering and other charges as part of the case and has pleaded not guilty, emailed the dean of admission, Timothy Brunold, advocating for a potential transfer student whose family had given millions of dollars to the athletic department.

Mr. Brunold wrote back a few hours later: “I have just been directed to admit this student to the spring semester.”

On Tuesday, The Los Angeles Times reported that U.S.C. had fired three senior officials in the athletic department, including its second in command and two officials involved in fund-raising.

On Wednesday, the university confirmed that the three officials were no longer working there. In a statement, it said the federal government had given no indication that the three “were involved in or aware of Heinel’s scheme with” William Singer, a college consultant who is at the center of the conspiracy alleged by prosecutors.