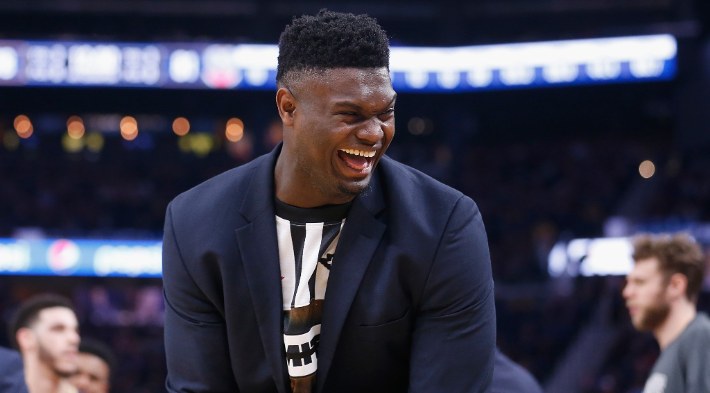 The NBA debut of Zion Williamson has finally been set. New Orleans President of Basketball Operations David Griffin announced on Wednesday that Williamson, the No. 1 overall pick in the 2019 NBA Draft, is anticipated make his debut for the Pelicans on Jan. 22 against the San Antonio Spurs.

Pelicans No. 1 pick Zion Williamson is expected to make his season debut on Jan. 22 against San Antonio, David Griffin says.

Williamson, the most highly-touted college player to enter the league since Anthony Davis and the most exciting prospect since LeBron James, has missed the first half of a season with a torn right lateral meniscus. The Pelicans training staff has reportedly updated his walking gait during his recovery period to insure that Williamson doesn’t have recurring health struggles throughout his career.

There was speculation that Williamson could be back within the week — some people had targeted New Orleans’ game against the Utah Jazz on Jan. 16 as a potential opener for the rookie phenom — but it appears he will get one additional week of rehab before playing in his first NBA game. It is worth noting that the Pelicans’ matchup against the Spurs is not currently scheduled to be on national TV, although watching Williamson’s debut will assuredly attract a ton of attention.

The former Duke Blue Devil dazzled during Summer League, and New Orleans was projected to make a run at the postseason with Williamson in tow. Instead, the Pelicans are 14th in the Western Conference, though only four games back of the eighth seed, while Williamson’s former AAU teammate, Ja Morant, is the clear-cut frontrunner to win Rookie of the Year for what he’s done at the helm of the Memphis Grizzlies. While Morant and Williamson won’t be able to go head-to-head when their teams face off on Martin Luther King Jr. Day, the Grizzlies and Pelicans are slated to play three more times this season.