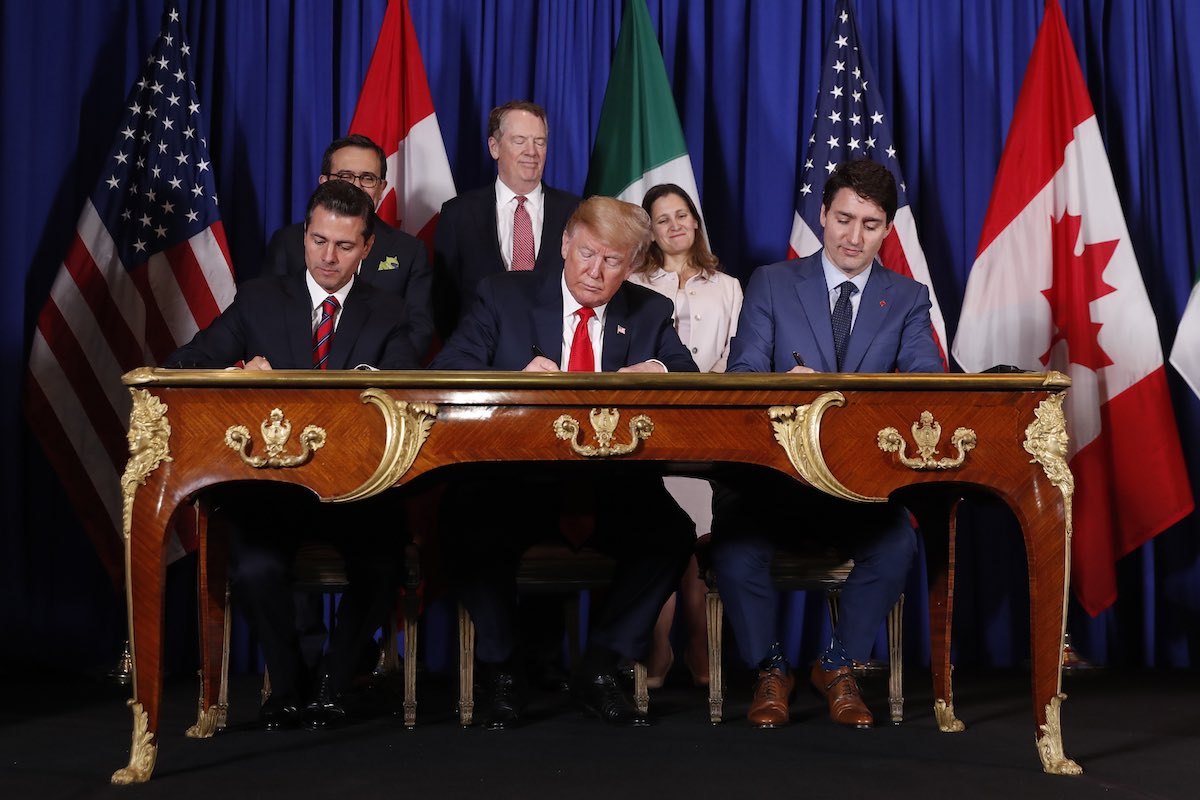 Democrats on the debate stage in Iowa said President Donald Trump’s renegotiated trade deal with Mexico and Canada is marginally better than the agreement it’s set to replace.

The U.S.-Mexico-Canada Agreement, which the House approved in December, is likely to hit the Senate floor soon. Trump originally signed the deal in 2018 to replace the 1994 North American Free Trade Agreement, and it was expected to take effect at the start of this year.

During the Jan. 14 debate, Sen. Bernie Sanders, I-Vt., was asked why he plans to vote against the trade deal despite having said it would make “modest improvements.”

“The answer is we could do much better than a Trump-led trade deal,” Sanders said.

He said the deal does not do enough to address climate change and would result in continued job losses as Americans compete against workers from other countries.

But Sen. Elizabeth Warren, D-Mass., said the new deal is a step in the right direction. “This new trade deal is a modest improvement,” she said. “Sen. Sanders himself has said so.”

“It will give some relief to our workers,” she said. “I believe we accept that relief, we try to help the people who need help, and we get up the next day and fight for a better trade deal.”

We wondered what parts of the USMCA the Democrats considered “modest” improvements, so we dug into the agreement that the House revised and ultimately sent to the Senate.

We found that House Democrats were largely satisfied with the tweaks they secured in the negotiation process with regard to labor standards, environmental protections and drug prices.

The House-passed version was celebrated by both sides

Broadly speaking, and as we’ve noted before, the USMCA would expand the United States’ reach into Canada’s milk and pharmaceutical markets, strengthen labor and environmental rights, and substantially increase the share of North American parts used in making cars.

Trump hailed the House’s movement on the USMCA as a win for his presidency. As a candidate, he promised to renegotiate NAFTA.

“America’s great USMCA Trade Bill is looking good,” he tweeted Dec. 10. “It will be the best and most important trade deal ever made by the USA.”

Top Democrats in the House were also happy with the changes they got out of their negotiations with the Trump administration.

“There is no question, of course, that this trade agreement is much better than NAFTA,” House Speaker Nancy Pelosi, D-Calif., said during a press conference. “But in terms of our work here, it is infinitely better than what was initially proposed by the administration.”

House Ways and Means Committee Chairman Richard Neal, D-Mass., called the House-backed version a “triumph for workers all across America.”

In a press release on behalf of the committee, Neal spelled out improvements the revamped trade deal achieved over NAFTA — and the original renegotiation Trump signed in 2018.

One victory he claimed was the deal’s strengthened labor protections for workers, especially in Mexico. The deal outlines benchmarks that Mexico must meet in order to stay in compliance with the agreement as it makes reforms to its labor laws.

The American Federation of Labor and Congress of Industrial Organizations, a coalition of labor unions, endorsed the version of the deal the House sent to the Senate.

“For the first time, there truly will be enforceable labor standards,” the AFL-CIO said.

Another victory came in the form of added environmental protections, although a number of environmental activist groups refused to support the deal, as Sanders noted in the debate.

Still, the revised deal includes a provision that “created a presumption that an environmental violation affects trade and investment,” Neal wrote in his statement. It also establishes an interagency committee to monitor and enforce countries’ environmental obligations.

Neal also noted that the House-backed version of the deal removed a clause that would have promised biologic drug companies 10 years of intellectual property protections.

Finally, Neal celebrated the revamped deal’s changes to the way countries handle problems under the agreement. The USMCA would remove a NAFTA loophole that had allowed countries to refuse to cooperate with an international panel process for settling disputes.