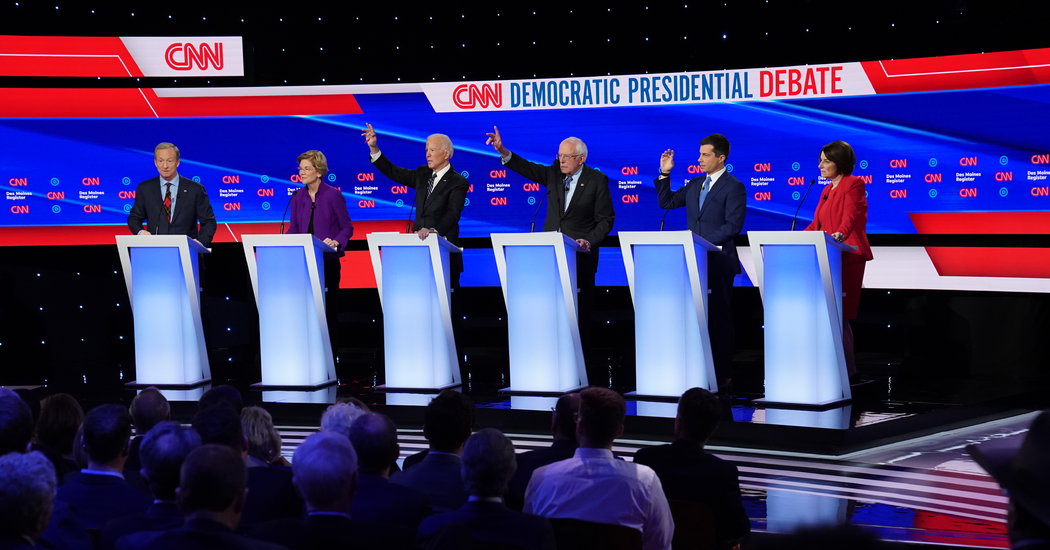 DES MOINES — The leading Democratic presidential candidates clashed on Tuesday over America’s role in the Middle East and their credentials to be commander in chief, as the progressive candidates highlighted their dovish credentials and the moderates called for pragmatism in the last debate before the high-stakes Iowa caucuses next month.

The six candidates also debated the fraught subject of whether a woman could win the presidency, an issue that had produced a breach in recent days between the two top liberal candidates, Senators Bernie Sanders of Vermont and Elizabeth Warren of Massachusetts.

Meeting onstage for the first time since President Trump ordered the killing of Maj. Gen. Qassim Suleimani of Iran this month, and in a state known for its anti-interventionist tendencies, each of the six contenders urged restraint about projecting American power.

But Mr. Sanders and Ms. Warren were especially vocal in arguing that American troops should not be committed to the Middle East.

“The American people are sick and tired of endless wars,“ Mr. Sanders declared.

Ms. Warren invoked the parade of generals who claimed progress in Afghanistan as they testified before her at the Senate Armed Services Committee and said it is time to withdraw combat troops from the region.

“We’ve turned the corner so many times we’re going in circles in these regions,” she said. “This has got to stop. It’s not enough to say, ‘Someday, we’re going to get out.’”

Joseph R. Biden Jr., however, was more cautious on troop commitments. While he boasted about his efforts as vice president to draw down American forces from Iraq, he said there was a difference between deploying waves of combat troops and retaining the American special forces he said had degraded the Islamic State. “They’ll come back if we do not deal with them,” Mr. Biden said of the group, also known as ISIS.

At the same time, both Senator Amy Klobuchar of Minnesota and former Mayor Pete Buttigieg of South Bend, Ind., both said they were opposed to a conflict with Iran but vowed to stop the country from obtaining nuclear weapons.

The debate over a woman’s chances to win the White House followed two days of acrimony between Mr. Sanders’s campaign and Ms. Warren’s. On the eve of the debate, CNN reported that in December 2018 Mr. Sanders told Ms. Warren in a private meeting that he did not think a woman could win the presidency. Before the debate, Mr. Sanders denied he had said it; Ms. Warren said he had.

Mr. Sanders stood by his denial — “As a matter of fact I didn’t say it,” he said onstage — and said it was “incomprehensible that I would think that a woman couldn’t be president of the United States.” Citing that Hillary Clinton won a plurality of votes in the 2016 general election, he went on, “How could anyone in a million years not believe a woman could become president of the United States?”

Ms. Warren said she disagreed with Mr. Sanders’s version, but then tried to de-escalate the conflict, saying “Bernie is my friend and I am not here to try to fight with Bernie.’’ She pivoted to address a question that has loomed over her candidacy: how she matches up against Mr. Trump, and said the women onstage — Ms. Warren and Ms. Klobuchar — had outperformed the men.

The clash onstage could be consequential for the treasuries of the candidates in the closing weeks, as well. The Sanders campaign said it had received 15,000 donations in just the first hour of the debate — accounting for 43 percent of all money raised on ActBlue, the party’s online donation-processing platform.

In a rare policy split, Mr. Sanders and Ms. Warren clashed on the new North American trade deal that Mr. Trump is trying to push through Congress. Mr. Sanders said it was not worth supporting — even if it made a “modest” improvement. “We can do much better than a Trump-led trade deal,” he said.

Ms. Warren, however, said that was the reason to support it. “We have farmers here in Iowa who are hurting,” she said.

The exchange was an example of how Ms. Warren has sought to position herself as a progressive more willing to get things done than Mr. Sanders.

The candidates sparred, as they have in all the debates, on health care. Mr. Sanders was pressed by the moderators about the cost of his “Medicare for all” package; unlike Ms. Warren, Mr. Sanders has not said what his proposal would cost or revealed which taxes he would increase to pay for it.

Mr. Sanders did not offer specifics onstage, saying only that it would cost “substantially less than the status quo.” Mr. Biden hit him for the size of the plan, which he said would double “the entire federal budget per year.” Mr. Sanders responded by saying that leaving the system as is would be “insane,” given how much of a worker’s earnings is devoted to health care.

Ms. Warren, who has found herself on the defensive over her embrace of Medicare for all in recent months, did not open by defending that package but instead focused on the first step of her transition plan, which would expand coverage with a public option.

“We have got to get as much help to as many people as quickly as possible,” she said, while pitching her plan as more expansive than those offered by Ms. Klobuchar or Mr. Buttigieg.

Ms. Klobuchar responded, “You would kick 149 million Americans off their health insurance.” And Mr. Buttigieg said, “It’s just not true that the plan I’m proposing is small,” suggesting that Ms. Warren’s approach would turn off too many voters.

The debate unfolded at an extraordinarily volatile moment in American politics — even by the standards of an unusually fluid primary race.

New polls in Iowa show that Democratic voters are roughly split between four top candidates, the longstanding nonaggression pact between Ms. Warren and Mr. Sanders was fraying and half the contenders onstage are about to leave the campaign trail in the crucial days before the caucuses to serve as jurors at President Trump’s impeachment trial.

A large part of the electorate remains up for grabs in a contest that many of the campaigns believe will produce record-setting turnout. A Des Moines Register-CNN poll last week indicated that 45 percent of caucusgoers said they could still be persuaded to support a different candidate. And Tuesday’s debate was sure to reach more voters than any other event in the dwindling days before the Feb. 3 caucuses.

The four leading candidates in Iowa — Mr. Sanders, Mr. Biden, Ms. Warren and Mr. Buttigieg — are knotted so tightly together that Mr. Biden was fourth in the poll last week, but first in another, from Monmouth University. Mr. Sanders topped the Des Moines Register/CNN poll for the first time, putting perhaps the biggest target on his back yet ahead of a debate.

Mr. Sanders had the opportunity right from the start to stress his pacifist credentials as the debate opened with questions about the heightened tensions with Iran and who was best positioned to serve as commander in chief. Mr. Sanders immediately seized the opportunity to trumpet his past opposition to the war in Iraq. “I not only voted against the war, I helped lead the effort against the war,” he said.

Mr. Sanders warned that both the Iraq and Vietnam wars had been based on “lies.” “Right now, what I fear very much is that we have a president that is lying again and could drag us into a war that is even worse than the war in Iraq,” he said.

Mr. Sanders drew a distinction with Mr. Biden, who had supported the Iraq war resolution in the Senate. “Joe and I listened to what Dick Cheney and George Bush and Rumsfeld had to say,” Mr. Sanders said. “I thought they were lying. Joe saw it differently.”

Mr. Biden said he regretted his vote for that war. “I was a mistake and I acknowledge that,” Mr. Biden said, while noting that as vice president he had brought thousands of troops home from the Middle East.

The rift between Ms. Warren and Mr. Sanders over whether a woman could be elected had been the dominant news of the primary the last several days, and had the ability to shake up the race if it divides the liberal camp and weakens either Mr. Sanders or Ms. Warren, or both of them, and produces a stronger moderate lane chiefly occupied by Mr. Biden.

Progressive activists who have hoped that either Mr. Sanders or Ms. Warren would emerge from a scrambled primary race were hoping that the sudden left-on-left violence would abate. And there were signs that both the Sanders and Warren campaigns would try to de-escalate the tension.

But in a sign that Mr. Sanders, whose most fervent online supporters have long faced claims of sexism, recognized the grave political risk of the accusations, his campaign began airing an ad in Iowa on Tuesday morning that highlighted his support of women’s rights.

“Bernie Sanders is on our side and he always has been,” a female narrator says in the commercial, trumpeting the senator’s support for abortion rights, support for family leave guarantees and equal pay legislation.

In another twist that had potential to impact the race in Iowa, Mr. Sanders and Ms. Warren, as well as Ms. Klobuchar and Senator Michael Bennet of Colorado (who did not make the debate), are confronting another looming challenge: how to mount a successful Iowa campaign while their duties in Congress require them to be in Washington.

With the senators likely to be in the Capitol up to six days a week for the impeachment trial of Mr. Trump, they will be unable to make their final appeals to Iowa voters in person as frequently as Mr. Biden and Mr. Buttigieg.

That could make for a most unusual ending of the caucuses in their over-four-decade history: a split-screen between candidates hustling for votes in the state’s high school gyms and union halls and others seated at their desks in the Senate chamber deliberating about whether to remove from office the president they are trying to defeat.