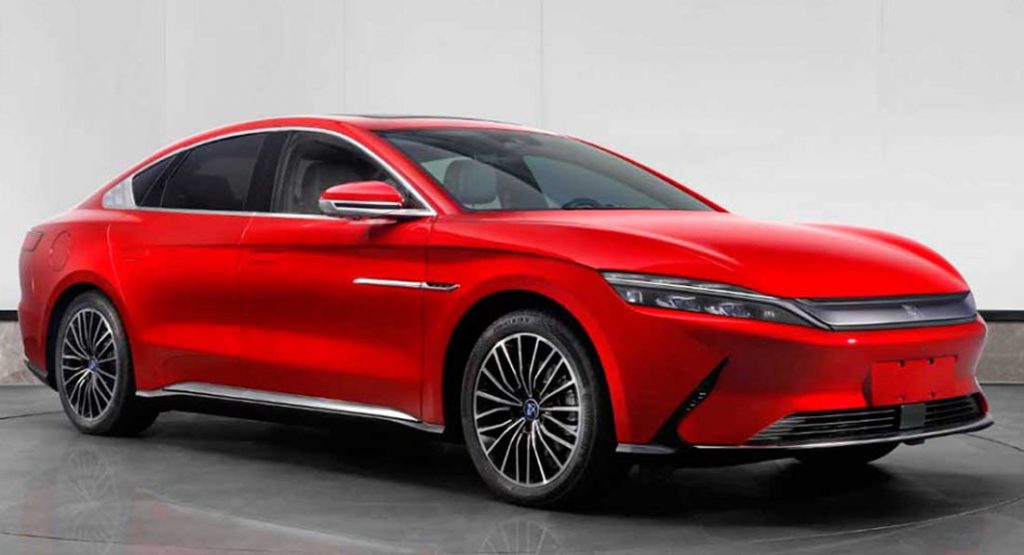 China’s BYD has released the first images of its new flagship medium-sized car dubbed the Han. The sedan will be sold in both plug-in hybrid and all-electric guises.

Visually, the two variants both adopt sleek designs but differ quite a lot. The front of the Han PHEV, for example, is much more traditional and supports a large grille with horizontal slats and a set of angular, Audi-inspired headlights. By comparison, the Han EV has a sharp and sportier front fascia that makes do without a traditional grille and also includes a set of slimmer headlights.

From the sides, the two appear identical but at the rear, the Han EV is differentiated from its more conservative sibling thanks to a blacked-out bumper and small diffuser.

Chinese media reports that BYD was eager to make the Han as aerodynamically efficient as possible and has managed to achieve a drag coefficient of 0.233 for the Han EV, slightly better than the Tesla Model S’ 0.24 drag co-efficient. Aiding in the Han’s ability to cut through the air are a set of optional aero wheels.

Powering the BYD Han EV will be a single electric motor that drives the rear wheels and delivers 218 hp. A more powerful, dual-motor variant with all-wheel drive will be available with 268 hp. Range is expected to sit at around the 450 km (279 mile) mark. As for the BYD Han PHEV, it supports a 2.0-liter turbocharged four-cylinder with 189 hp working alongside a trio of electric motors to create a combined 476 hp.

Both the BYD Han EV and Han PHEV will be unveiled at April’s Beijing Auto Show.