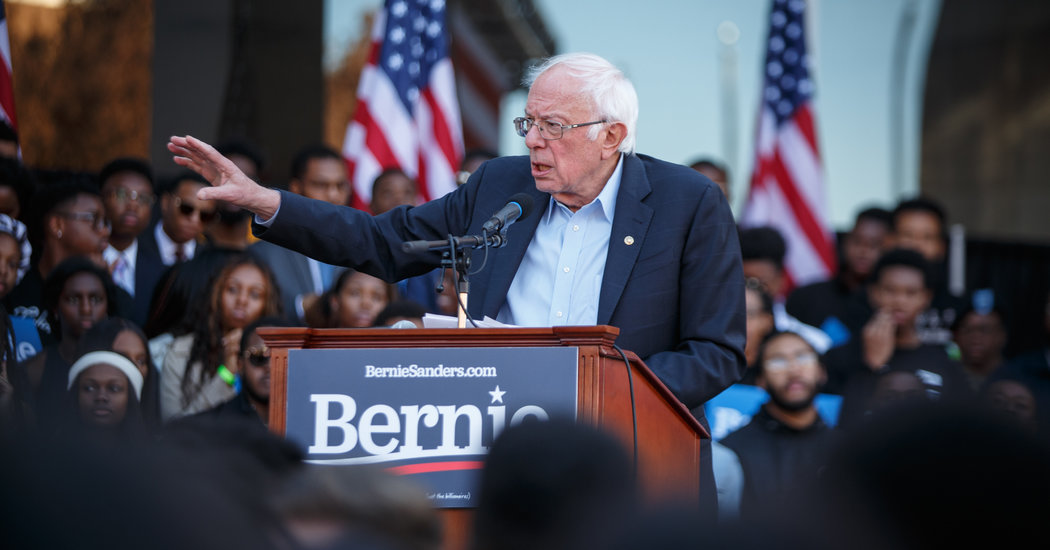 Bret Stephens: Hi, Gail. I’ve been coming around to the view that Bernie Sanders could really win the Democratic nomination and the presidency, and the numbers show it. A poll released last week by The Des Moines Register and CNN gives him the lead in Iowa, and he’s in strong contention for New Hampshire. His fund-raising is just extraordinary: more than $34 million last quarter, raised mostly in very small donations.

Do you see him winning the nomination? And how does “President Sanders” sound to you?

Gail Collins: Definitely better than “President Trump.” He’s not my favorite Democrat, but what I’m looking for now is anybody who can win and get us out of this nightmare.

If you told me Sanders is a guy you’d vote for, I would certainly be impressed. Come on — give me your appraisal.

Bret: O.K. Here goes: I could never vote for Sanders. Joe Biden? Sure. Pete Buttigieg or Amy Klobuchar? Gladly. Mike Bloomberg? Enthusiastically. They are all middle-of-the-road Democrats who would restore honor to the White House and sanity to the country, and maybe even teach Republicans a valuable lesson in the perils of embracing a demagogue.

But while I would never cast a ballot for Donald Trump, there’s no chance I’d vote for either Sanders or Elizabeth Warren.

Gail: We have a disagreement!

Gail: I understand that Sanders and Warren have economic principles that you most definitely do not share.

But they’re reasonable human beings who could represent the presidency to the nation and the world without causing us to hang our heads in shame.

Bret: I might say that about President Warren. Not President Find-the-Silver-Lining-in-Fidel-Castro Sanders.

Gail: Once upon a time, Sanders actually had a good record of getting bipartisan support for his legislation. And it’s not as if he’d be able to walk into the White House and impose democratic socialism. Remember that Obama, who ran on the idea of national health care, could barely get a much smaller, flawed version through a Congress he theoretically controlled.

Bret: Trump also has been able to get only a fraction of his agenda through Congress. The wall with Mexico is largely unbuilt. We still take in hundreds of thousands of immigrants every year, including from majority-Muslim countries (though the numbers are declining). Our sanctions on Russia are still in place, and we haven’t abandoned NATO. But I still wish Trump had never been elected in the first place.

Gail: We’ll agree on that forever.

Bret: Let’s assume President Sanders got just one-third of his agenda through Congress. What would that mean? Dramatic cuts in defense spending that would leave us and our allies even more vulnerable to Russian or Chinese aggression. One or two huge new government spending programs that would weigh on fiscal balance sheets for generations. Punitive tax increases on billionaires, who have the means and the savvy to move their assets offshore, and major tax hikes on people who aren’t anywhere near as rich, and who can’t avoid taxes. Declining incentives for investment; ever-growing incentives for political corruption as a way of gaining favors from the state.

On the plus side, however, we’d be seeing much more of Larry David on “Saturday Night Live.”

Gail: Or … it would mean a turnaround on the Trump tax cuts for the wealthy, which have made the gap between the richest one percent and the bottom 99 even more appalling.

Cutting the defense budget doesn’t mean making the country weaker. It’s stuffed with pork — expensive and unnecessary projects that please only the egos in the Pentagon and politicians pushing for new spending in their districts. Personally I’d rather go with Sanders or Warren and put the money in schools.

Bret: The one bright spot of the Trump years is an economy that has defied doomsayers and surpassed expectations with historically low unemployment and excellent stock-market returns. Those aren’t small things, most of all to people who live at the margins or outside of the labor market, including people nearing retirement and looking expectantly at their portfolios.

Gail: Some of us believe he’s just coasting off the Obama recovery. And people who worry about deficits must notice that ours is exploding from the lost revenue caused by his tax cuts. But go on.

Bret: If Trump just wired his mouth shut and bandaged his fingers for the next 10 months to keep him from saying or tweeting something awful, he could just ride the economic numbers to victory.

Gail: Kinda digging the image of that wired mouth. …

Bret: For the longest time I thought that the best way of beating him would be a candidate who projected sanity and balance: a “return to normalcy,” to cite a president of 99 years ago. Now, however, I’m starting to think that Sanders may be the only Democrat in the field who can beat Trump. He’s the only one who has a clear ideological vision, who presents the sharpest possible contrast to Trump and who has the same sort of cultlike following that can turn a political campaign into a mass movement. What do you think?

Gail: If Joe Biden holds up, I think he can do fine. Presumably paired with someone young and healthy like Amy Klobuchar or Cory Booker.

Bret: “Young and healthy” will definitely be a vital consideration in Biden’s choice of a running mate.

Gail: And at some point today we’ve got to argue about Elizabeth Warren.

Gail: But first … I’m confused. We’ve been talking forever about how Trump is worse than anything. And now you say Sanders is the only one who can beat Trump. But you wouldn’t vote for Sanders? So basically you’re throwing your chips into four more years.

Bret: Not at all. I’m more than happy to vote for many Democrats with whom I have all kinds of political and ideological differences because I want to see Trump gone. I probably won’t be wild about President Buttigieg’s choices for Supreme Court nominees, and certainly not his court-packing scheme. I probably won’t agree with much of President Biden’s foreign policy. I’ll probably have many differences with President Klobuchar on economic and social policy. But, whatever: I can live with all of it because nothing any of those could do would damage the fabric of American life the way Trump’s presidency does.

But that doesn’t apply to every prospective Democratic nominee. And Sanders is just a bridge too far.

Gail: Even though you think he’s the only one who can beat Trump?

But no, I’d be wrong to say he’s the only one who can win. Of the other candidates, Klobuchar would be Trump’s strongest opponent. She has a winning combination of an aw-shucks sensibility and a first-class brain. And Trump would have a hard time attacking her, at least not in ways that wouldn’t expose him to a devastating retort.

Gail: Suspect a whole lot of Democrats could concoct that devastating retort.

Bret: That said, she hasn’t built a movement and Sanders has. So I’m just hoping that Democratic primary voters want not only a candidate who can win, but a president who can govern.

Gail: Take me back a step. Weren’t you sorta into Biden as one of the moderate possibilities?

Bret: That was during my speed-dating-with-moderates phase, Gail. I kinda rotated through him along with Buttigieg and Hickenlooper and Bullock and Bennet and now Klobuchar. I reserve the right to flip back to Joe if he starts winning.

Gail: I don’t think Biden has better ideas than Sanders does — we really need something more riveting than “Why can’t we all get along?” But he feels like the Democrat with the best chance of winning. Nobody hates him, and I think most Americans are very eager to move past the issues about his son.

Biden would be very strong at drawing black voters, but I have to admit, Sanders might be more powerful when it comes to getting a great turnout of young people.

Bret: An interesting fact about this primary season: There doesn’t seem to be much of a correlation between a candidate’s identity and his support. Buttigieg is young, but younger voters seem turned off by him. Neither Kamala Harris nor Cory Booker was able to elicit African-American support the way Biden has. Sanders would be the oldest man ever elected president, but he draws much of his support from millennials. And, from what I’ve seen of the polls, Warren seems to have all but lost a small edge with women voters. I guess this only means that people vote according to interest and inspiration at least as much as they vote according to identity. What do you think?

Gail: Did you see the CNN story about Sanders telling Warren over dinner that a woman couldn’t win? He vehemently denies it and, of course, I absolutely do not agree. But it is interesting that we haven’t had all that much talk about gender — even about women voters.

You know, for years I believed women would not vote for a candidate who yelled because he reminded them of their worst boyfriends. I’m kinda wondering as the campaign chugs along whether some women are going to pay serious attention to Sanders for the first time and think, “Calm down, please.”

Obviously my theory doesn’t always work — look who’s in the White House. Still, if I’m right this time it might suggest a plus in the primaries for people like Biden and Klobuchar. And Mayor Pete. Are you still a Mayor Pete fan?

Bret: Absolutely. His left toenail knows more about the world than both hemispheres of Trump’s brain. But if I had to choose between the mayor of South Bend and Klobuchar, I’d choose her. Experience counts for a lot in life — and in politics. She has it far more than he does.

Sanders doesn’t strike me as a screamer. He’s just … intense. A lot like my own late great-uncle, who was also a socialist from Brooklyn named Bernie. Lovely, loving man, full of heart and good intentions. Wouldn’t vote for him, either.