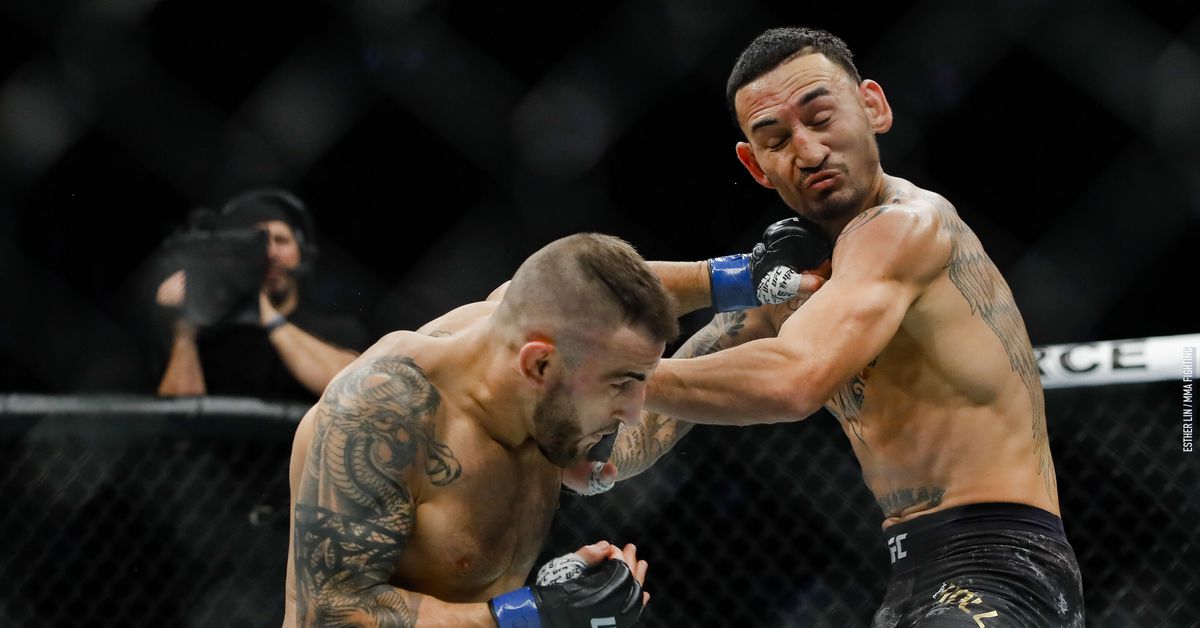 Alexander Volkanovski promises he will be a fighting champion but right now he has some questions about who deserves the first shot at his UFC featherweight title.

This past December, the Australian slugger outdueled Max Holloway over five rounds to become the fifth 145-pound champion in UFC history. He handed Holloway his first loss in the division in over six years and 15 featherweight fights to claim the title.

Immediately after the fight was finished, UFC president Dana White turned his attention towards a potential rematch and Volkanovski was completely on board with the idea — until he returned home and watched the fight again.

“Straight after, Dana White was mentioning the rematch and even I touched base on it but watching back the tape, the fight wasn’t probably as close as I originally thought,” Volkanovski told MMA Fighting on Monday.

“Watching it again and I was trying to watch it as I was trying not to be biased. I was definitely trying to notice everything that he done. I was struggling to give him one round. I really did. There’s obviously rounds that was a lot closer than others but if you’re giving him a round, it’s purely because he was champion and you wanted him to win. That’s the way I look at it. There was some rounds that were a little bit closer but I was struggling to give him a round. I really was. But it’s not like I blew him out of the park every round but I was definitely ahead.”

Without a doubt, Volkanovski still has a lot of respect for Holloway as a former champion and it’s entirely possible that they will cross paths again. He’s just not so sure it’s a foregone conclusion that the Hawaiian should get the automatic rematch by default.

That said, if the UFC is determined to book the matchup a second time, he’s not in the business of turning down fights.

“If it was a lot closer, a split decision, stuff like that, I mean my coaches are even going to say he deserves that rematch. But they watched the tape and they’re like ‘you can’t just give him a rematch after that,’” Volkanovski said. “I’m the type of person, I’ll fight whoever.

“I believe I’ll get the job done anyway. Not just that, I reckon there’s money in that rematch as well and I could probably redo my contract, we’ll see. Again, we’ll just see. There’s time.”

Another factor could be Holloway’s willingness to fight Volkanovski again after teasing an eventual move to lightweight in recent years.

While he came up short in his bid to become the interim 155-pound champion last year, the ex-champ has said his future probably lies in a bigger division where he wouldn’t have to endure such a massive weight cut.

“Without being rude, I was saying that I would take that belt and I would make that decision easier for you and you could move up. Maybe that’s what he is doing, I don’t know.”

Before he can contemplate a rematch or a title defense against another opponent, Volkanovski first has to heal a broken right hand suffered at UFC 245 this past December. He had surgery to repair the damage done and the new featherweight king is currently targeting a mid-year return to action but with a cast still on his hand, nothing has been determined right now.

In the meantime, Volkanovski would like to see the best of the best in the featherweight division—including Holloway—determine a true, undisputed contender for his next fight.

“Even if Max is interested in a rematch, you get someone like Zabit [Magomedsharipov] and “The Korean Zombie” [Chan Sung Jung] go fight before that, go out and knock each other out or whatever happens, they’ll probably take the opportunity away from Max,” Volkanovski explained. “Especially after Max convincingly losing, they’ll probably give it to Zabit or Korean Zombie. That’s what I mean. Don’t give them the opportunity. Go and take it.

“Max isn’t even saying he wants the rematch and that sort of stuff. So you go out there, you fight and you win and that rematch hasn’t even been brought up yet. Then that idea gets blown out of the water and everyone keeps going with the hot flavor of each month.”

More than anything, Volkanovski just wants the chance to face the best possible opponent when he comes back later this year. He lives by the moniker “earned not given” and that’s the path he hopes more title challengers would follow.

“No one’s a clear No. 1 contender. I’m on the sidelines. Right now, I’ve got a broken hand. What can I do? But I know what these boys can do. They can solidify themselves as the No. 1 contender,” Volkanovski said. “Take someone out. Take out whoever you feel can put you in that No. 1 spot. Do what I done. That’s what I done leading into my title fight.

“I fought Chad Mendes to make sure I was in the top five. Then I wanted to fight [Jose] Aldo, secure that No. 1 contender’s spot. Fought him in his backyard. Not that many people would do that but I did that to give me that No. 1 spot. I just think that’s something these guys can do. It might be June or July when I’m fighting, I don’t know yet so go solidify yourself as the No. 1 contender and I’ll see you soon.”