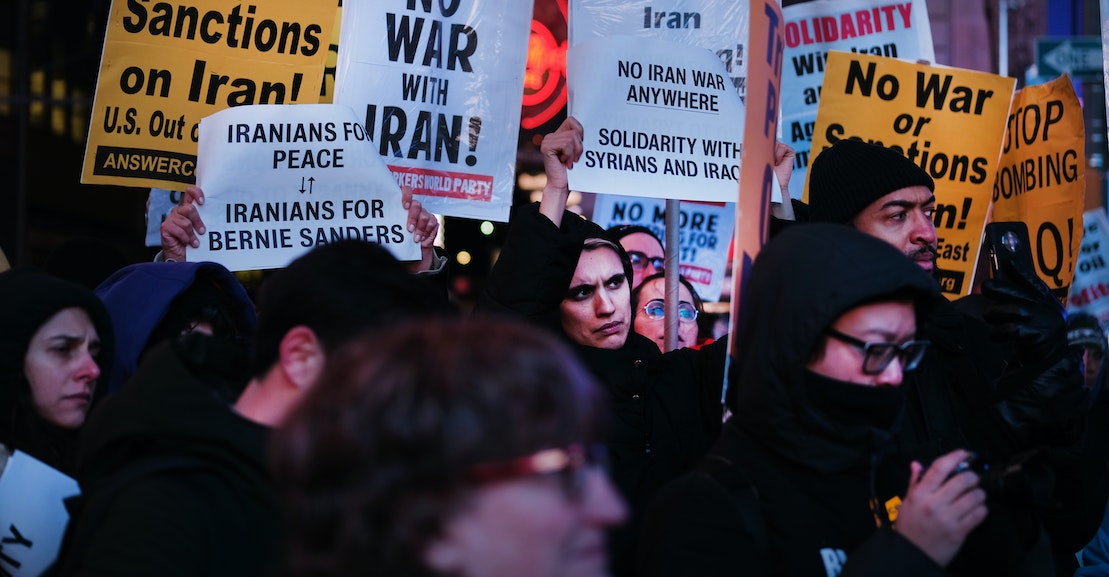 On the eve of what was ludicrously called Operation Iraqi Freedom, I was a teenager in Boise, Idaho, protesting in front of the state Capitol with the Idaho Green Party, a scattering of mostly Gen X neo-hippies. It was, in retrospect, an incredibly dismal time to cut one’s teeth as any kind of anti-war activist. Though there were mass worldwide demonstrations—larger than even the Vietnam war protests, everyone involved kept pointing out—the war machinery churned on. In March 2003, the United States bombed Baghdad and launched a ground invasion based on a lie; the next year, George W. Bush was elected to his second term.

Bush, we knew, was incompetent, entirely unqualified. He had lied about the presence of weapons of mass destruction in Iraq and waged an illegal war against the caution of the international community. He was a legacy-admission president who had lost the popular vote in 2000. He couldn’t pronounce “nuclear” and was a hapless puppet for hawks like Dick Cheney, Donald Rumsfeld, and Condoleezza Rice.

Being old enough to have once bought, in earnest, a Rock Against Bush compilation CD is to feel a certain sense of déjà vu in the Trump era. Perhaps it is this sensation of recent history repeating itself that has led the public to adopt a kind of low-grade apathy concerning foreign policy, at least for the time being. According to a Washington Post dispatch from Iowa this month, voters are apprehensive about the prospect of war with Iran but not particularly interested in talking about it.

That isn’t to say that war is popular. Though current attitudes about military escalation with Iran are varied, nearly two decades after Republicans shoehorned “freedom fries” onto the congressional cafeteria menu, the military interventions in Afghanistan and Iraq are largely considered costly foreign policy blunders among civilians and veterans alike. And as military operations in the Middle East have dragged on, conditions at home have deteriorated. Today, student debt has surpassed $1.5 trillion, 27.5 million people lack health care, and the richest 1 percent of the population owns 40 percent of the nation’s wealth. Political inequality has also reached stultifying levels: A prominent 2014 study by the political scientists Martin Gilens and Benjamin Page estimated that economic elites so disproportionately influence politics that the effect of the average citizen on policymaking is now essentially zero; a more recent analysis by another team of researchers found that congressional representatives have almost no idea what their own constituents even want.

In this depressing landscape, there may very well be the seeds of an anti-war effort capable of thwarting new interventions in the Middle East—which is to say, accomplishing what we couldn’t in 2003. Even as the threat of open war appears to have temporarily subsided, building a broadly popular, working-class coalition that can effectively oppose future escalations remains a critical project.

Any anti-war movement is a massive undertaking with a high risk of failure, but a clue to where we might start lies in a small study published in Foreign Policy a few months ago: It found that, by far, the Democratic presidential candidate with the most money contributed by military personnel was Bernie Sanders, a former Students for a Democratic Society peacenik and conscientious objector to the Vietnam War who has opposed many of our major military excursions since then and pledged repeatedly to cut Pentagon budgets.

It might initially seem counterintuitive for such a figure to attract military support, but Andrew Hunter, a veteran who served in the Navy from 2006 to 2012 and has been a Sanders supporter since 2016, thinks that the Vermont senator’s anti-interventionism is a crucial part of his appeal. “Most people in the military aren’t warmongering types,” he told The New Republic. “You have lots of people who got pulled into it, who have nothing else going on or come from bad circumstances. And none of those people want to be deployed, and they sure as hell don’t want to be deployed to a place where they’re gonna catch bullets.” And unlike politicians who pay lip service to supporting troops but have also attempted to, say, chip away at the Department of Veterans Affairs, Sanders has consistently advocated for soldiers when they return home. A former chairman of the Senate Veterans Affairs Committee, he fended off several Republican efforts to defund the department and worked to expand veterans’ benefits: As a result, there was already a contingent of veteran support for him in the run-up to the 2016 election.

The military support for Bernie probably makes even more sense in the context of sharpening class stratification and economic insecurity. “No one wants to be away from their family, whether on deployment or in the field, so it’s appealing to a lot of people when a candidate proposes a change to the economic makeup of our society that would mean that people wouldn’t have to enlist or put themselves through a military lifestyle,” said Spenser Rapone, a former soldier who served in Afghanistan and is now earning a master’s degree in historical studies at the New School in New York. (Rapone gained notoriety for flashing “Communism Will Win” on the inside his cap during his West Point graduation, a violation of military etiquette that earned him an “other than honorable” discharge.)

For instance, an Army soldier I’ll call Kevin, who asked for anonymity because he’s still on active duty, enrolled in college in 2014 on an ROTC scholarship. When he had to drop out of school, his only options were to enlist in the service or pay back the $50,000 his scholarship had covered, which he couldn’t afford. When he gets out of the military in a few months, he’s going back to school on the Post-9/11 GI Bill—a benefit measure that was co-sponsored, as it happens, by Bernie Sanders. Kevin donates monthly to Sanders, whose proposals to cancel student debt and make public universities tuition-free are cornerstones of his campaign.

The dovish senator’s capacity for rallying troops suggests that a convincing and durable anti-war message may depend, in addition to building up national support for anti-war organizing already happening at the grassroots level, on the ability to articulate a better life at home as much as foreign policy expertise. Of course, one of the best precedents for that was Martin Luther King Jr.’s opposition to the Vietnam War. “I knew that America would never invest the necessary funds or energies in rehabilitation of its poor so long as adventures like Vietnam continued to draw men and skills and money like some demonic, destructive suction tube,” King said in a landmark 1967 speech. “So I was increasingly compelled to see the war as an enemy of the poor and to attack it as such.”

That piece of the puzzle continues to go missing across a number of recent mainstream responses to the Trump-Iran escalations. This week, a New York Times editorial argued that Trump’s unsophisticated approach to international relations was an opportunity for a savvy Democrat to outshine him in foreign policy, rather than focusing solely on “domestic topics, such as health care and economic inequality.” On the same day, opinion columnist Frank Bruni lamented: “Here we are, with an inexperienced, impulsive and perpetually aggrieved commander in chief precisely when we can’t afford one.” But if the Bush era was any indication, fixating on the president’s purportedly unique and unprecedented incompetence and bellicosity won’t slow the march toward war. Instead, the winning message might be the far simpler truth that Sanders has invoked over and over again, echoing the socialist five-time presidential candidate Eugene Debs before him: The class that wages wars is rarely the class that fights them.