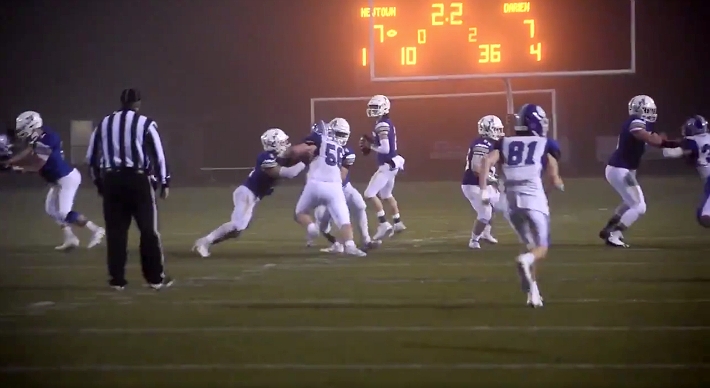 Sports cannot erase the horrors of real life, but sometimes good sports stories can be a distraction from them. That was certainly the case on Saturday for one high school football team in Connecticut, where Newtown High School won a dramatic state football championship on the anniversary of one of the most deadly school shootings in US history.

Newtown became a national flashpoint in 2012 when it was the site of a mass shooting at an elementary school, Sandy Hook, where 26 people were killed by a gunman. Seven years later, the town’s high school played one of the biggest games in program history in a fog. It was a tense, low-scoring game that ended in tears for both team when Newtwon had the ball and a chance for a last-ditch win with the score tied at seven.

The Nighthawks (13-0) are your Class LL state champions. pic.twitter.com/qCIF3E5Ruu

The video captured by Shawn McFarland is tremendous, following Ward down the field in the dark as he hit the endzone. Ward immediately took off his helmet and ran over to his teammates to celebrate.

It was an extremely emotional scene for Newtown, which celebrated in style.

As many pointed out, some of the students at Newtown were in elementary school when the shooting happened, adding extraordinary context to an already dramatic high school sports moment.

For those who aren’t aware of the context, this is seven years to the date of the Sandy Hook shooting in Newtown.

Ward truly was the hero on Saturday, scoring the other touchdown for Newtown on a 75-yard catch and run earlier in the game.

A game filled with fog and punts ended with one of the more amazing finishes you’ll ever see. Sports, sometimes, truly are great.