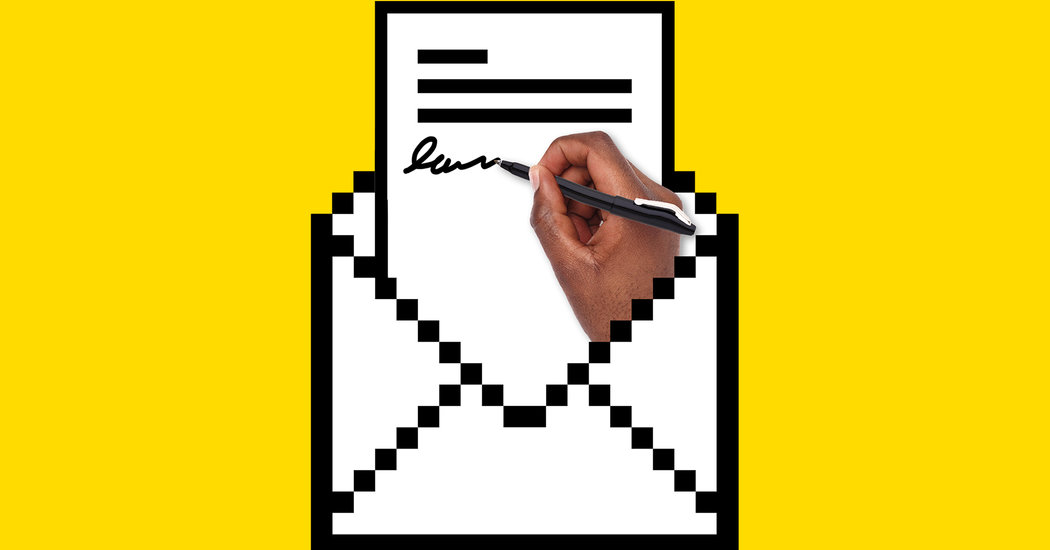 There’s nothing like doing a story about email to make you feel really, really insecure about your own digital correspondence.

While I’ve spent plenty of time worrying about whether to close with a “most defiantly yours” or an “xoxo,” that was where my thoughts about signing emails stopped (and I usually chose “best”). Signature blocks always felt a step too far: Pretentious or presumptuous (who was I to tell people who I was or what I’d done?), they seemed just not “cool” or “me.” They were trying in a way that appeared very much to be trying. For most of my working life, I didn’t use one.

But I’d been missing out on a world of opportunity.

It’s normal to be nervous about writing email, from the opening salvo to the final sentiment, said David Austern, clinical assistant professor of psychiatry at N.Y.U. Langone Health. After all, we quickly craft these notes to one another, from behind our iPhones or our laptops, distracted by innumerable things going on around us. And yet, the messages have high stakes. We want or need something; we’re creating a digital footprint we hope will stand in for the real thing — ourselves. So how do you do it better? (And if someone hates your signature, do they hate you, too?)

First, a word about email

More than a decade ago, the Macmillan editor Will Schwalbe and his friend David Shipley — then the deputy editorial page editor and Op-Ed page editor of The Times, now senior executive editor at Bloomberg Opinion — sat down over a couple of beers at the Oyster Bar in New York’s Grand Central Terminal and began to hash over their daily working woes. Most of their problems, it turned out, had to do with email.

“No one had given instructions to do it in a way that treats others with respect and encourages us to do so,” Mr. Schwalbe said.

The result was 2007’s “Send: Why People Email So Badly and How to Do it Better.” It got an update in 2010, in which the authors noted that everything they’d discussed originally also applied to social media. Its themes are as relevant as ever, in part because while technology continues to evolve rapidly, email hasn’t changed that much. And its purpose gets at a human need that also remains constant: the ability to communicate. With email, Mr. Schwalbe said, “It’s really about how we treat people when we aren’t talking face to face.”

Welcome to the human brand

People — and their emails — are different, of course, and so are the ways we use the technology, and why. As with much in life, it depends on what you’re trying to accomplish. If you’re selling something, for instance, it’s “perfectly fair to put a link to whatever you’re selling,” Mr. Schwalbe said. Ditto if you’re very active on social media: Include a link. You may pick up a new follower or two, but you’re also giving people an opportunity to know more about you in a way that matters to you.

But can you go too far with links and addendum trailing down the page after your last goodbye? Is anyone really reading to the bottom of the email anyway? Yes, and sometimes.

Charlie Grosso, an entrepreneur who includes links to her website and Instagram as well as her phone number, urges finding a balance.

“As in all things, there’s a fine line between what is done with grace vs. what is just self-promotion,” she said. But, she admitted, “I don’t know what that line is.” It might be annoying when people add a long list of their latest accomplishments to the end of their email. On the other hand, Ms. Grosso said: “It’s like ad space for ourselves. So why wouldn’t you take it to its most logical conclusion?”

[Like what you’re reading? Sign up here for the Smarter Living newsletter to get stories like this (and much more!) delivered straight to your inbox every Monday morning.]

Samantha Ettus, founder and C.E.O. of Park Place Payments, includes her title, her phone number and a link to her company.

“It’s an opportunity to highlight who you are, and it’s the most personal part of an email,” she said. Even if no one gets that far, what do you have to lose?

An email signature can even be inspiring. Ms. Ettus was influenced by the signature of the TV producer Shonda Rhimes: “Please Note: I will not engage in work emails after 7 p.m. or on weekends. IF I AM YOUR BOSS, MAY I SUGGEST: PUT DOWN YOUR PHONE.”

“It’s so powerful — she’s setting the tone for work-life balance in her organization,” Ms. Ettus said. “It’s an opportunity to say this is how I manage my busy life, and you can do it, too.”

Meredith Fineman runs FinePoint, a professional development company that trains C.E.O.s, founders and women in positions of power on visibility and voice; she’s also the author of the upcoming book “Brag Better: Master the Art of Fearless Self-Promotion.”

Ms. Fineman practices what she preaches in her signature, which includes a preorder link to her book; links to her website, company and podcast; her phone number; and links to her (and her dog Bean’s) Instagram accounts, all accentuated with emojis. As you might expect, she feels strongly that it’s a missed opportunity not to have an email signature.

“My big thing is teaching women to brag and self-promote,” she said. One of the first orders of business with a new client is redoing their email signature. “I always tell people there is low-hanging fruit all around you. An email signature is a great place a lot of people miss. You can show people who you are before they have to deduce it for themselves. It’s certainly helped me with speaking engagements, media and press opportunities, and it’s how I present myself to potential clients.”

She’s aware of the criticisms, though.

“I saw a tweet once that was nasty, about how the length of someone’s signature is directly proportional to how crazy they are,” she said. She shrugged that off. “You want to make it as easy as possible for someone to hire you, feature you. You never know how far they’ll glance. It’s such a great, easy thing to do.”

Inspired, I crafted my own simple signature: “Jen Doll, author and freelance journalist. You can find out more about my work here!” It was easy as pie, and I don’t even grimace when I press send (at least, not usually). Are people reading to the end? I have no idea. But no one’s complained about it, either.

The stuff that follows

There’s an urge to include a tongue-in-cheek homage to our phones, or to note the overall weirdness of this digital time at the end of emails. Take Ms. Grosso’s note, “Sent from the road on a tiny robot,” which follows her name, a link to her website, a link to her Instagram and her phone number. When I asked her about it, she laughed. “That’s got to be three or four years old,” she said. “It used to say ‘Sent from an undisclosed location.’”

These notes may seem extraneous in an iPhone-saturated society.

“I am a habitual eraser of ‘Sent from my iPhone’ from all pre-loaded locations,” said Silvia Killingsworth, a digital editor at Bloomberg Businessweek. But the notes can add some relatively inoffensive personality or perhaps give an out for mistakes if you remind people, as the author and producer Wendy Sachs does: “Sent from my iPhone. Forgive the brevity, typos and lack of nuance.”

There’s research to back that up, Mr. Austern said. One 2012 study examined reactions to emails that had been deliberately manipulated to include typos. Some also included the line “sent from my iPhone,” while others did not. People were much more forgiving of mess-ups when the iPhone line was included. But, Mr. Austern said, with the speed of technology and the proliferation of spell-check, that could change too. And, in the place of “Sent from my iPhone,” you could always include something a lot more interesting.

Jay Blotcher, co-founder of Public Impact Media Consultants, wanted his signature to “add some levity to exchanges which could sometimes be either intense or politically heated.” He tried a few options, and his favorite was, “Vain attempts at profundity via Jay’s iPhone.” When some people commented on his self-deprecating humor, he felt he’d made the right move.

“I’d occasionally switch the wording, but keep the same sentiment,” he said. “This went on for more than five years.” But when he got a new iPhone a few years ago, the signature reverted to the generic “Sent from my iPhone.” No one noticed — not even Mr. Blotcher himself, who realized the change only after I asked him about his signature.

Now that he knows, “I’m likely to go back to adding one, which means agonizing over how to sound casual but clever,” he said. “I like the flourish of personality that a signature offers.”