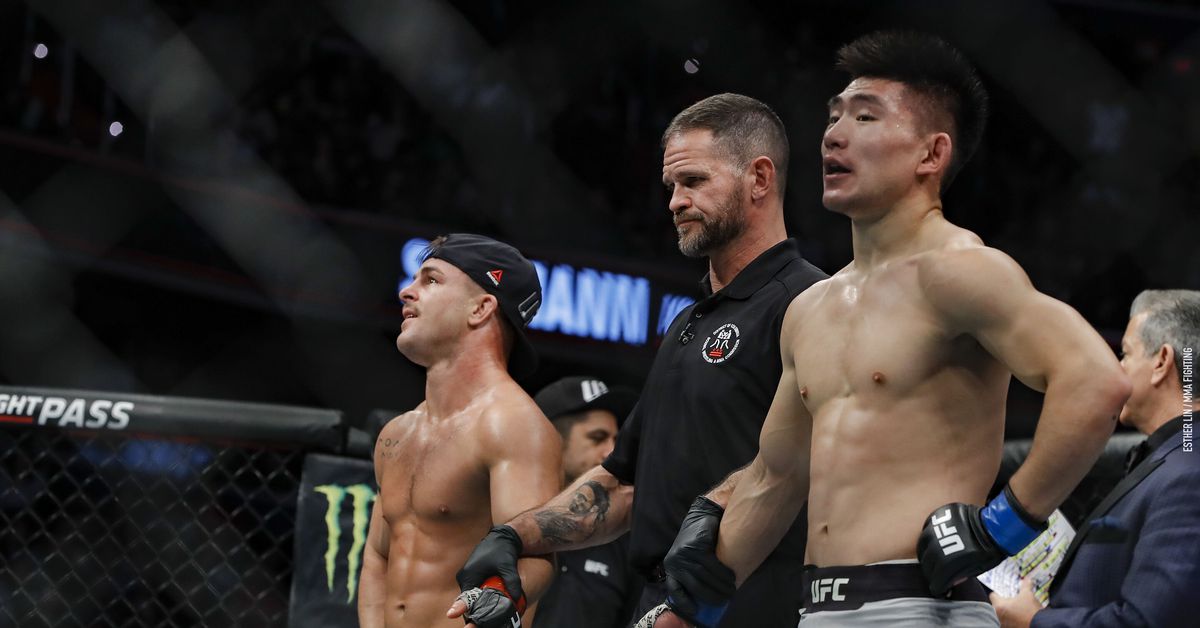 Neither Cody Stamann nor Song Yadong will leave Washington D.C. with a win after their bantamweight battle at UFC on ESPN 7 ended in a majority draw.

The decision was ultimately rendered after a point deduction was levied against Song in the opening round, which was the difference between a draw and a victory for the 22-year-old prospect from China.

The decisive point deduction came in the opening round after Song fought his way free from a Stamann takedown before unloading a massive knee strikes that landed flush to the head. Because Stamann was still a grounded opponent, the knee was deemed illegal and the referee wasted no time taking a point away from Song, which makes a huge difference in a three round fight that ends in a decision.

Knowing that he had to work his way back from the point deduction, Song tried to punish Stamann during every exchange on the feet but he was constantly fighting off takedown attempts, which stymied his blistering quick combinations.

To his credit, Song managed to stay out of trouble most of the time he was stuck on the canvas but he failed to prevent Stamann from dragging him down several times.

Stamann was methodical with his grappling offense, doing just enough to keep Song stuck underneath him while peppering away with punches to ensure the fight would stay grounded. With seconds remaining, Stamann opened up as he began hammering away at Song until the final horn sounded

A confident Stamann climbed to the top of the Octagon in celebration, obviously believing he had done enough to secure the victory. Much to his surprise, however, the judges disagreed and with the point deduction in the first round the fight was declared a majority draw.

It’s a disappointing end for Stamann and Song as both fighters looked to build momentum in the always tough UFC bantamweight division but now they will head back to the drawing board looking for a definitive win to start 2020.