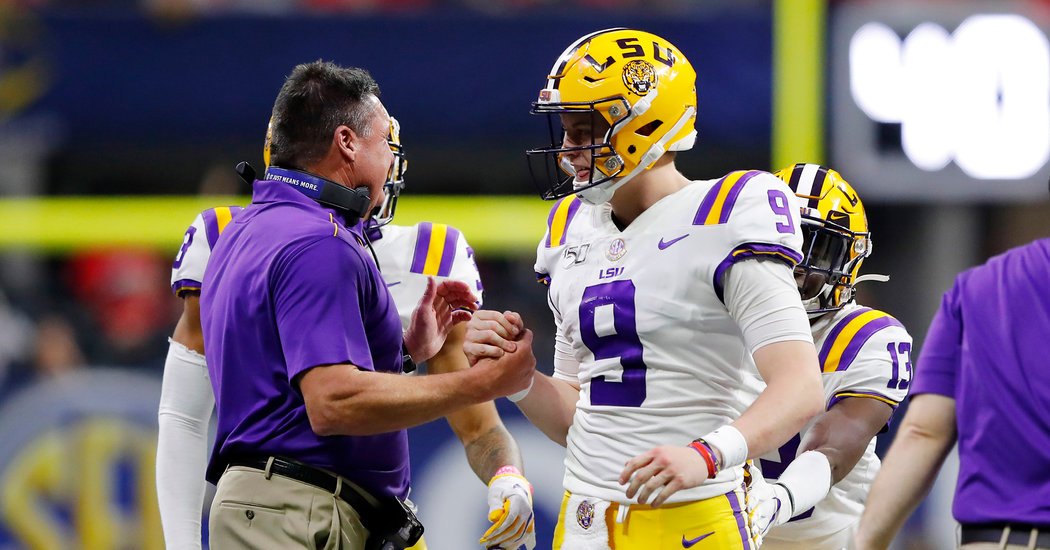 The potential for chaos has given way to certitude: Louisiana State, Ohio State, Clemson and Oklahoma will compete for a national title after their selections on Sunday for the College Football Playoff.

The season’s semifinalists, announced after the conference championship games and deliberations by a 13-member committee, made official that the playoff would include a trio of undefeated teams for a second straight year. And with a host of blue-chip programs damaged by at least two losses each, the committee’s picks also appeared more immune than usual from the bickering that has so often surrounded college football’s postseason.

Top-seeded Louisiana State will meet No. 4 Oklahoma in the Peach Bowl in Atlanta on Dec. 28. No. 2 Ohio State and third-ranked Clemson will play in the Fiesta Bowl, near Phoenix, on the same day. The winners of the semifinal matchups will advance to the national championship game, scheduled for Jan. 13 in New Orleans.

All of the playoff teams have offenses that rank among the nation’s top five, with L.S.U. and Oklahoma both averaging about 554 yards per game. On defense, Clemson has allowed just 10.6 points per game, the best such showing in the nation, while Ohio State has permitted 12.5, tied for the second-best mark.

The Pac-12 Conference was the lone Power 5 league excluded from the playoff, after its team with the greatest potential for a berth, Utah, lost on Friday night. By Sunday morning — and, in most respects, by late afternoon Saturday — the suspense surrounding exactly which teams would reach the playoff had ended and been replaced by a more nuanced debate over seedings and pairings.

Entering Sunday, there was little doubt that Oklahoma, which defeated Baylor in overtime for the Big 12 championship, would be seeded No. 4, because it was the only playoff-bound team with a loss. And although Clemson, the defending national champion, had amassed a record of 13-0, including a 62-17 shellacking of Virginia for the Atlantic Coast Conference crown, it seemed entrenched as a middle seed, a consequence of a schedule often mocked and critiqued for its relative ease.

That left L.S.U. and Ohio State, with résumés widely seen as superior, as the only teams to consider for the top seed — and the right to bypass Clemson in a semifinal.

L.S.U., led by the Heisman Trophy-contending quarterback Joe Burrow, crushed then-No. 4 Georgia, 37-10, in the Southeastern Conference championship on Saturday. That win, which followed victories over Alabama, Auburn and Florida during the regular season, deepened the sense in Baton Rouge that L.S.U. had the most impressive series of wins because of its place in a league that likes to proclaim its weekly perils.

The Tigers also had a nonconference victory over Texas, a team that seemed far more formidable when it hosted L.S.U. in September.

Ohio State, the first Big Ten team to reach the playoff since the 2016 season, spent this year decimating its opponents, and since Nov. 23, it has beaten three top-15 opponents by an average of almost 18 points. But its 34-21 victory over Wisconsin to claim the Big Ten title started as a slog and, coming soon after L.S.U.’s dominance over Georgia, fanned questions about whether Ohio State should retain the top rank it held going into the weekend.

“I think we’re No. 1 point-blank, period,” Chase Young, Ohio State’s star defensive end, said after the Big Ten championship game in Indianapolis. “I just feel like a team like this, that hit a lot of adversity, has been tested many times, times like today. To see us come back, and not just come back but we came back and we dominated. I feel like a team that can flip the switch like that is, you know, a No. 1-worthy team.”

“I’ve told the team it doesn’t matter,” Orgeron said of the rankings. “It don’t matter where they rank us, where they tell us to go. We’ve got to win the next game. That’s all that matters.”

L.S.U. still had plenty of people openly believing it could, and should, be No. 1. As he wore SEC championship headgear and L.S.U. attire outside the Tigers’ locker room, Gov. John Bel Edwards of Louisiana said: “It’s hard for me to imagine there’s a better football team in the country. When you look at the top teams in the country now, nobody has the résumé that L.S.U. has.”

Even Dabo Swinney, the Clemson coach who has long argued that his program was undervalued, seemed to recognize on Sunday night that his team had virtually no chance of locking up the top seed, or even the No. 2 spot (a distinction that would not matter because the second- and third-ranked teams play one another).

Predicting that Clemson would hold at No. 3, he added, “It doesn’t really matter. We’ll play somewhere and play somebody and be thankful for the opportunity.”

Arguments about seeding notwithstanding, the consensus around this year’s playoff field may momentarily curb the near-ritual hand-wringing over the size and scope of the sport’s postseason — a debate that surely would have been inflamed had Utah and Oklahoma both won conference titles and been able to brag about one-loss records.

But even before Utah faltered on Friday night, college athletics executives were showing only so much interest in swiftly altering the playoff format, which is governed by a contract that expires in 2026. Greg Sankey, the SEC commissioner, asserted Friday that “the four-team playoff has worked, is working and can continue to work.”

Larry Scott, the Pac-12 commissioner, said before Utah’s loss that the playoff’s designers, including his conference, had known that a four-team format guaranteed that at least one Power Five conference would be left out every year.