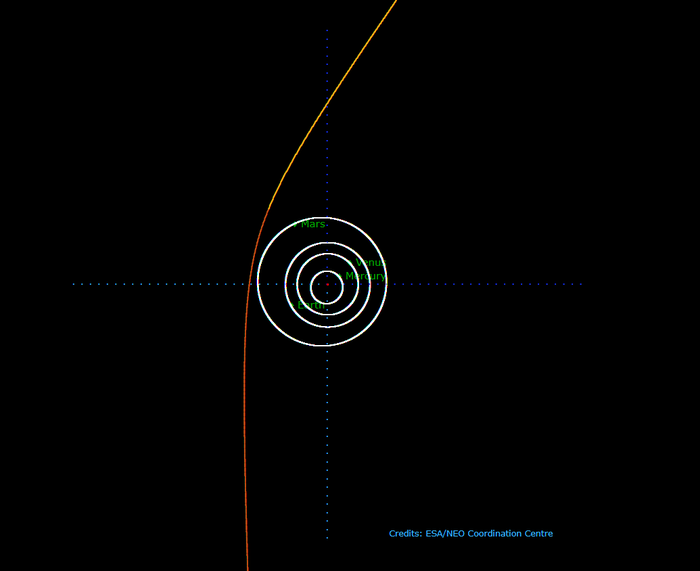 An intriguing interstellar comet from beyond our solar system will make its closest approach to the sun today Sunday (Dec. 8) and may be visible in some small telescopes, according to SkyandTelescope.com.

Comet 2I/Borisov was discovered in late August by amateur astronomer Gennady Borisov. The comet has an extremely extended orbit, which indicates it came from outside our solar system, beyond the sun’s influence.

The interstellar comet is expected to reach perihelion (closest approach to the sun) today, at which point it will travel about 2 astronomical units (AUs) from the sun. One AU is the average distance between Earth and the sun, about 93 million miles (150 million kilometers). The comet will then pass closest to Earth a few weeks later on Dec. 28.

Observations show that Borisov has a small, bright head with a faint, extended tail, and its surface is reddish in color. The comet is expected to reach a visual magnitude peak of 15 during perihelion, suggesting it may be visible using an 8 or 10-inch telescope under clear skies, according to SkyandTelescope.com.

“Right now, Comet Borisov is small and compact with a short tail pointing northwest. If the comet remains compact or nearly stellar and reaches magnitude 15.0, experienced observers might spot it in a 10-inch [telescope],” according to SkyandTelescope.com. “Chances improve for telescopes 12 inches (30.5-cm) or larger under dark, moonless skies. Equally important is to use high magnification to ‘expand’ the small object and further darken the sky background.”

Related: Interstellar Comet: Here’s Why It’s Got Scientists So Pumped Up

Based on the comet’s speed and trajectory, astronomers believe that it came to our solar system from afar. It arrived traveling at speeds of 33 km/s, but is expected to reach a peak velocity around 44 km/s at perihelion.

Comet Borisov is only the second interstellar minor body to enter our solar system, following the mysterious cigar-shaped object named ‘Oumuamua, which was first spotted in October 2017. Researchers will continue to track Borisov as it makes its way through the solar system and hopefully identify where the comet came from.